Whoa! What are these weird whirlpools spotted by satellites at opposite sides of the planet? 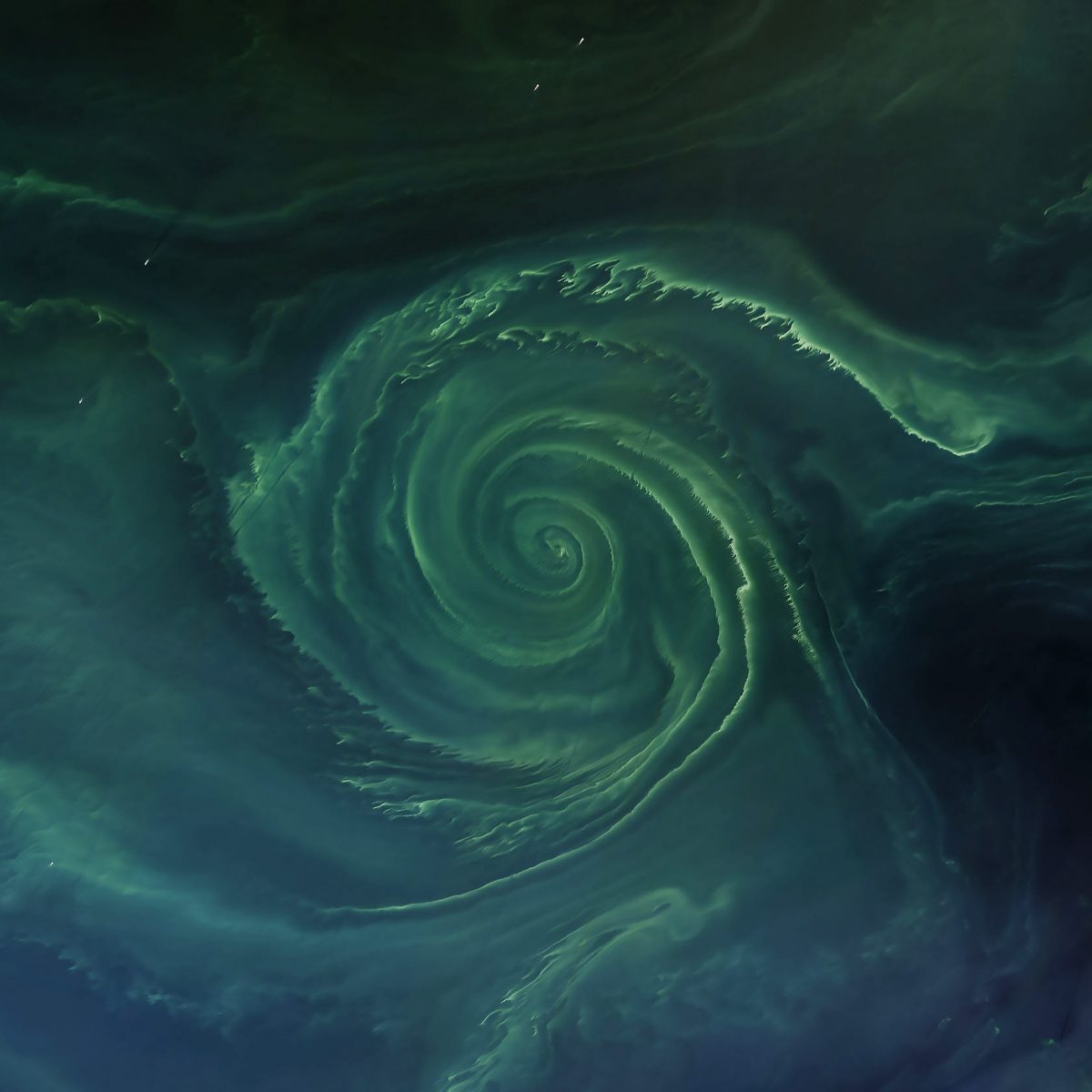 I hope youâ€™ll excuse the exaggerated exuberance in the headline, but when I saw the image above, and then the animation lower down in this story, my first reaction really was to exclaim out loud â€œwhoa!â€�

I was really struck by the two very curious whirlpool-like features on opposite sides of Earth â€” one gigantic the other small, one eerily green and the other swirling over a red dessert. And so I decided to try to shoehorn them into one ImaGeo post! Here goesâ€¦

At first, the glowing green whirlpool seen in the image above seemed wondrous: It turns out to be a giant bloom of phytoplankton in the Gulf of Finland that has been swirled into a vortex by an ocean eddy. It was imaged on July 18, 2018 by the the Landsat 8 satellite, according to a NASA Earth Observatory story. 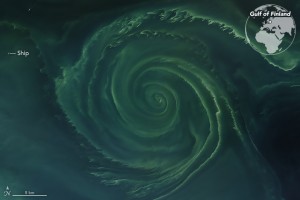 The swirling bloom is at least 15 miles across, which means New York Cityâ€™s Manhattan Island could fit inside it with a little room to spare. (For a more tangible sense of scale, click on the version of the image at right and look for the ships.)

But my sense of wonder quickly turned to unease when I learned that the phytoplankton are most likely photosynthesizing cyanobacteria, a form of blue-green algae. And that almost the entire Gulf of Finland has been â€œinfestedâ€� with the organisms, as a Finish news site put it â€” likely the result of recent soaring temperatures and an abundant supply of nutrients in the water from sewage and agriculture runoff.

Extensive phytoplankton blooms are common in North Atlantic and Arctic Ocean waters, â€œwith blooms spanning hundreds and sometimes thousands of kilometers,â€� according to NASA. But blooms this summer off of Scandinavia â€œseem to be particularly intense.â€�

The blooms have been leading to trouble in recent years. As NASA puts it:

In recent years, the proliferation of algae blooms in the Baltic Sea has led to the regular appearance of â€œdead zonesâ€� in the basin. Phytoplankton and cyanobacteria consume the abundant nutrients in the Balticâ€”fueled largely by runoff from sewage and agricultureâ€”and reproduce in such vast numbers that their growth and decay deplete the oxygen content of the water. According to researchers from Finlandâ€™s University of Turku, the dead zone this year is estimated to span about 70,000 square kilometers (27,000 square miles).

The Baltic experiences some of the worldâ€™s largest dead zones. And a study published earlier this month by German and Finnish researchers found that oxygen loss in coastal areas over the past century is unprecedented in the last 1,500 years. 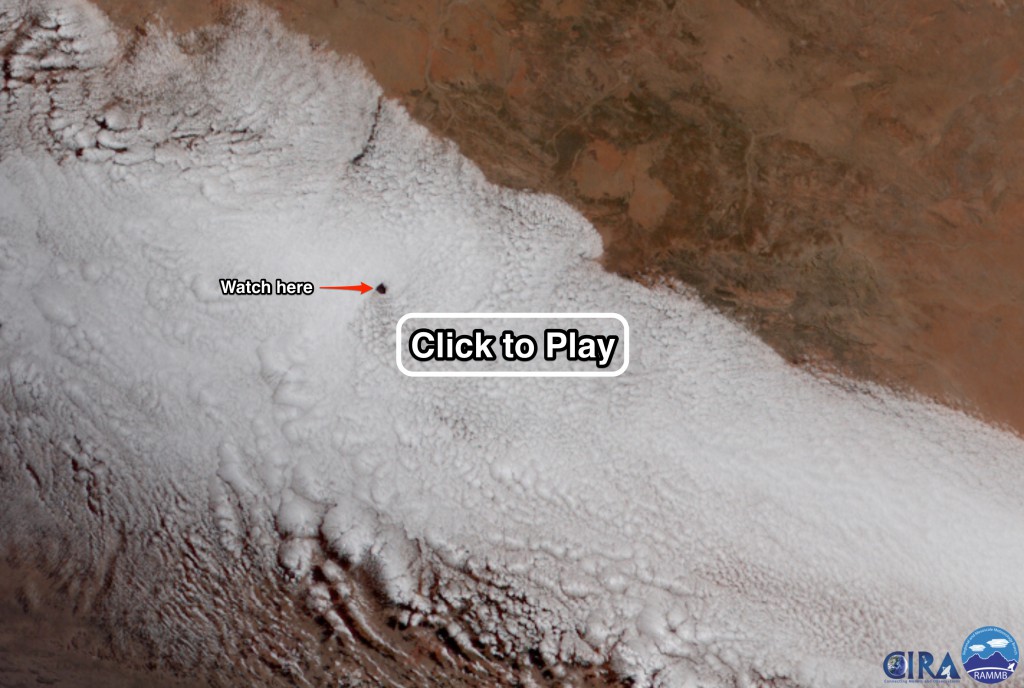 An animation of images from the Himawari-8 satellite reveals a curious vortex in the cloud deck above the Australian outback on July 23, 2018. (Note: After you click on the screenshot above, hit play on the page that loads. If the animation doesnâ€™t start, try refreshing the page.) Source: RAMMB/CIRA

Meanwhile, on the other side of the planet, check out this little whirlpool spinning in the clouds above the Australian outback, a bit west of the city of Alice Springs. It is what meteorologists call a â€œmesovortexâ€� â€” a cyclonic swirl of air that can range from a mile or so in diameter to tens of miles wide.

Mesovortices can spawn in the eyewall of a hurricane, and in association with thunderstorm activity. But this one seems to have been born in another way â€” perhaps as winds were diverted around a blunt, high-profile landscape feature.

This happens all the time off the coast of California (to mention just one region) as prevailing winds encounter islands, creating what are known as â€œvon KÃ¡rmÃ¡n vortices.â€� Hereâ€™s an awesome example:

So many von Karman vortices. So amazing to watch. (h/t @lilly_wx) pic.twitter.com/6hBa7mJ2Q1

â€œIt certainly has a similar look to some of the vortices that often form off California,â€� said Philippe Papin, an atmospheric scientist at the Naval Research Laboratory, replying to a query I posed to him on Twitter.

In fact, I learned of the little Australian vortex from a Tweet by Papin:

Check out this stunning #Himawari 0.5km visible loop of a clear #vortex within a stratocumulus deck near #AliceSprings, #AU. I’m use to seeing shallow vortices in the marine layer off of #California, but not in the #Australia #Outback!

But the Red Center of Australia is a very different environment than the coastal waters of Southern California, to say the least!

Well actually, weâ€™ve got a low-lying cloud deck that is similar to what is often present off the California coast. Weâ€™ve also got moving air. And I think weâ€™ve got a candidate for a blunt, high-profile landscape feature â€” a kind of island in a red dessert sea: 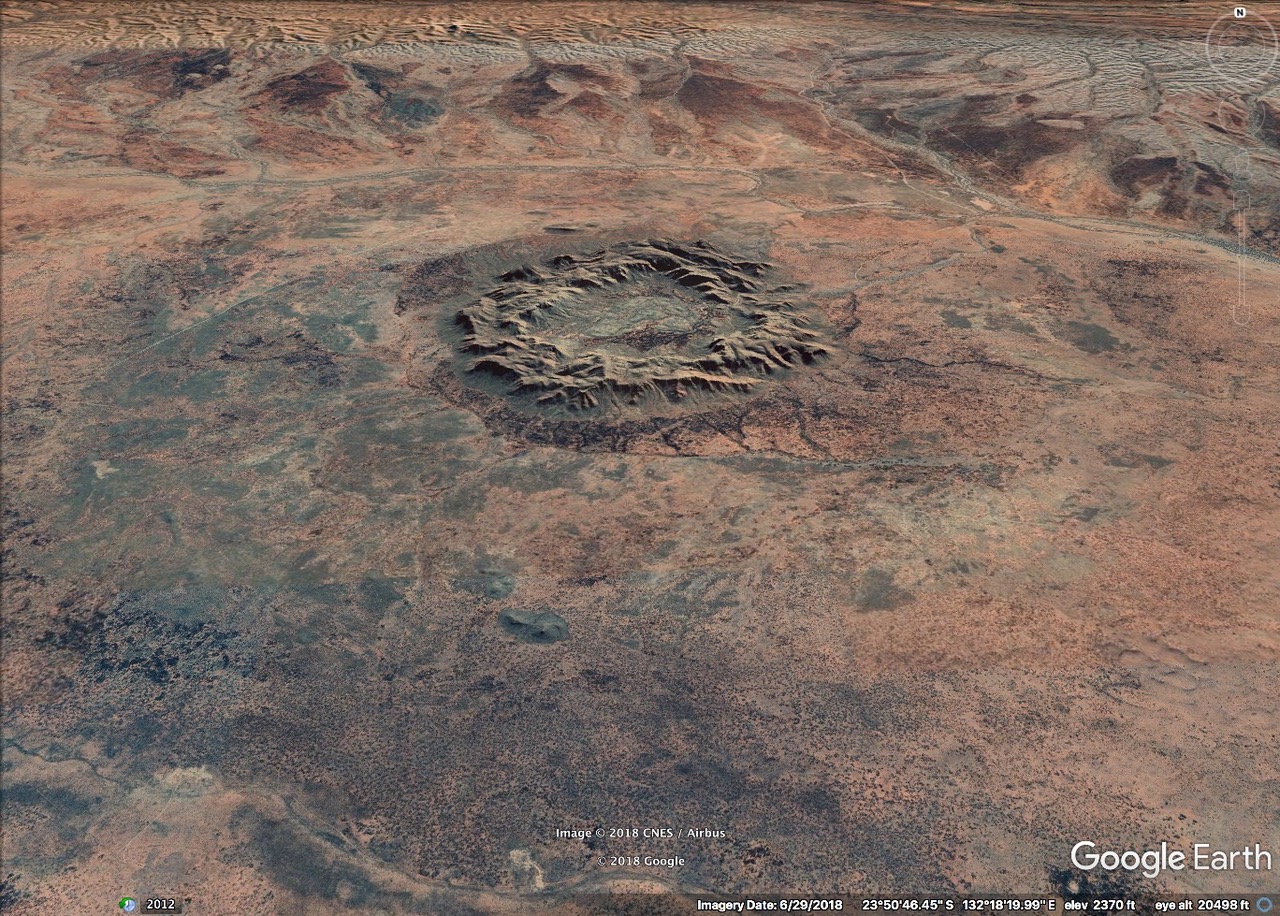 Gosses Bluff, known as Tnorala to the Western Arrente people.

Youâ€™re looking at the remnants of a likely impact crater. Known as Gosses Bluff, it is about 100 miles west of Alice Springs in Australiaâ€™s Northern Territory.

It is located in what seems to me to be just the right place to have caused the diversion of air needed to form a little von KÃ¡rmÃ¡n vortex.