When You&#039;re Drowsy, Is Your Brain Partly Asleep? 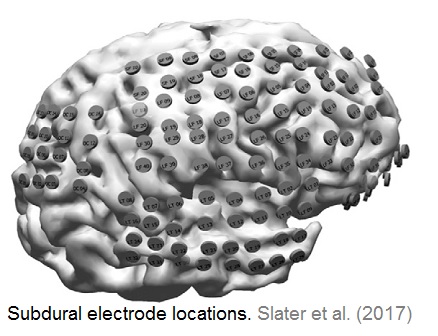 When we’re feeling very tired, we sometimes remark that we’re “half-asleep”. But is this more than just a figure of speech? A new paper suggests that parts of our brain may actually ‘fall asleep’ even while we’re still awake.

According to researchers Jeremy D. Slater and colleagues of the University of Texas, “local sleep” occurs throughout the human brain, with each brain region passing into and out of a sleep-like state over time. What’s more, local sleep becomes more and more common in the brain over the course of the day, suggesting that the tiredness we feel at the end of the day may reflect the fact that much of our brain is inactive.

Slater et al. studied six patients who’d each had about 100 electrodes implanted in their brains as part of a program of treatment for severe epilepsy. Here’s an example of the electrode locations:

Recordings from the electrodes were constantly acquired over a period of several days and nights, so Slater et al. were able to determine which features of the brain activity were most characteristic of sleep as opposed to wakefulness.

It turned out that across the brain, sleep was strongly associated with two things: an increase in the amplitude of delta waves, and a fall in the peak frequency of alpha waves. This isn’t a new finding, but Slater et al. went on to examine whether each electrode was showing activity more characteristic of sleep or waking at any given time.

The result is what they call a “restgram”: 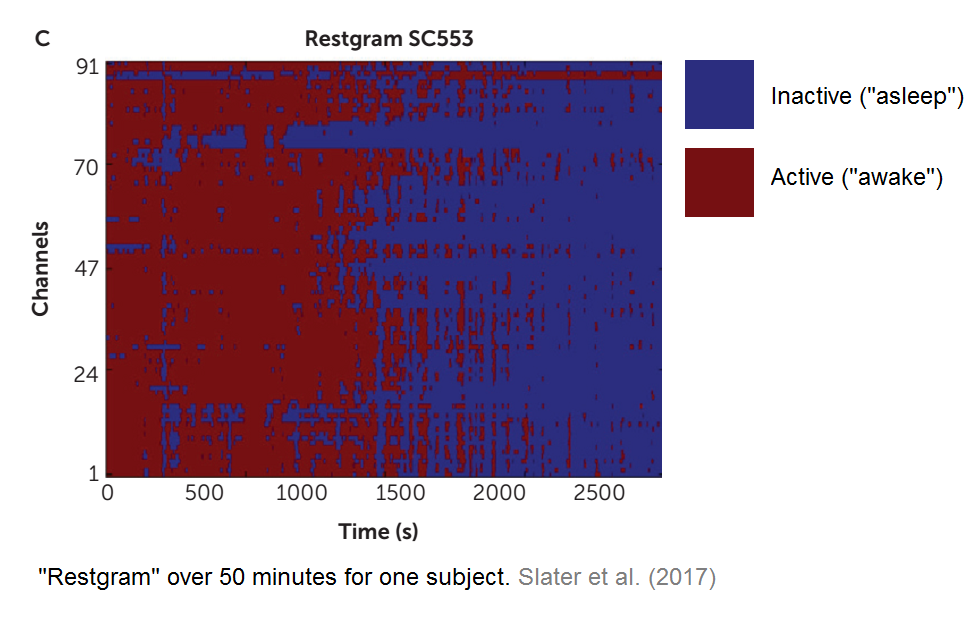 This restgram shows that over the space of about an hour, this patient (“SC553”) gradually went from being awake to being asleep. But the sleep-like “inactive” pattern of activity (blue) didn’t arrive all at once. Some points in the brain (i.e some electrodes) ‘fell asleep’ before others. And most electrodes went through several cycles of ‘waking’ and ‘sleeping’ over the course of the 50 minutes.

This is an interesting study. However, it relies on the assumption that all brain electrical activity can be classified into just two states: “active” and “inactive”. But a closer look at the data in this paper reveals that there’s a smooth continuum between high delta, low alpha frequency “sleep” and low delta, high alpha frequency “wake” activity, as seen in this scatterplot of the activity from one particular electrode over time: 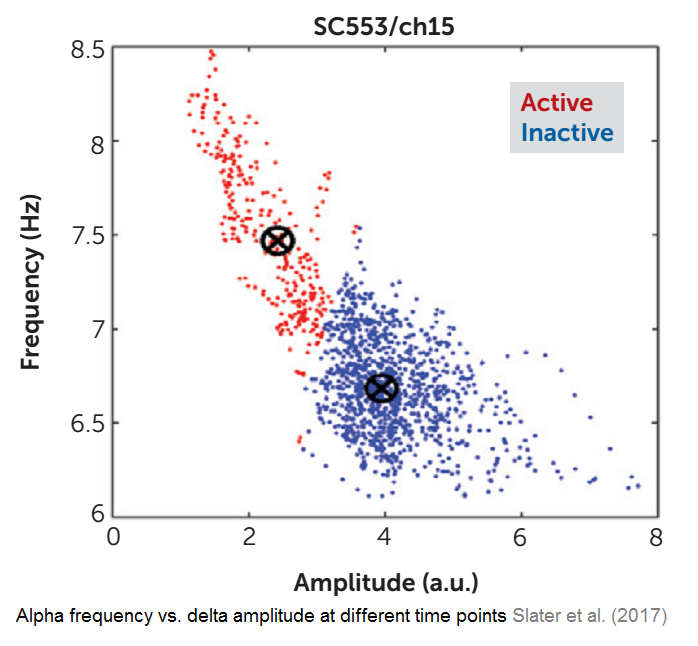 The datapoints are grouped into two classes (red and blue, wake and sleep) but this seems arbitrary. We could just as well decide to view the data as one cluster, or three, or more. This is because Slater et al. used an algorithm, K-means clustering with a fixed K=2, which is guaranteed to partition a dataset into two clusters.

My concern is that this binary approach all but guarantees that some electrodes will show “sleep” activity during waking, because “sleep” here means only that the activity is closer to the average for sleep than to the average for waking – a rather broad definition.