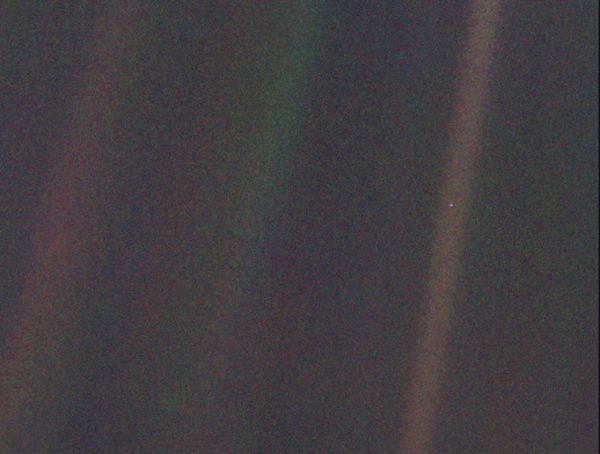 Earth, seen as the faint dot in a sunbeam, is 4 billion miles away in this image from Voyager 1. (Credit: NASA/JPL)

We first glimpsed Earth’s curvature in 1946, via a repurposed German V-2 rocket that flew 65 miles above the surface. Year-by-year, we climbed a little higher, engineering a means to comprehend the magnitude of our home.

In 1968, Apollo 8 lunar module pilot William Anders captured the iconic Earthrise photo. We contemplated the beauty of our home.

But on Valentine’s Day 27 years ago, Voyager 1, from 4 billion miles away, took one final picture before switching off its camera forever. In the image, Earth, Carl Sagan said, was merely “a mote of dust suspended in a sunbeam.” So we pondered the insignificance of our home. The image inspired Sagan to write his book “The Pale Blue Dot,” and it continues to cripple human grandiosity. 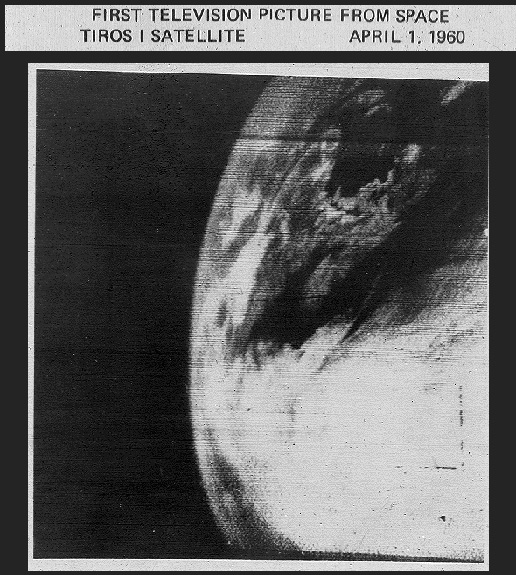 The Voyager 1 and 2 twins were launched within days of each other, sent on complementary missions to survey the outermost gas giants. Sagan was a key member on the Voyager missions, and long before launch he requested Voyager 1 take an image of the Earth as a part of the planned “Solar System Family Portrait” series. However, the team didn’t want to risk frying the Voyager 1’s expensive camera by spinning toward the sun.

Sagan prevailed after much deliberation and planning, and Earth, of course, made the photo-shoot cut. It resulted in Sagan writing this timeless quote:

The Voyager missions are among the most scientifically successful missions to date. Together they revealed rings around Jupiter, volcanic activity on Jupiter’s moon Io, resolved the rings of Saturn, and imaged Uranus and Neptune for the first time. Peeking toward Earth wasn’t a scientific goal, but you don’t get many opportunities to see the planet from than vantage point. 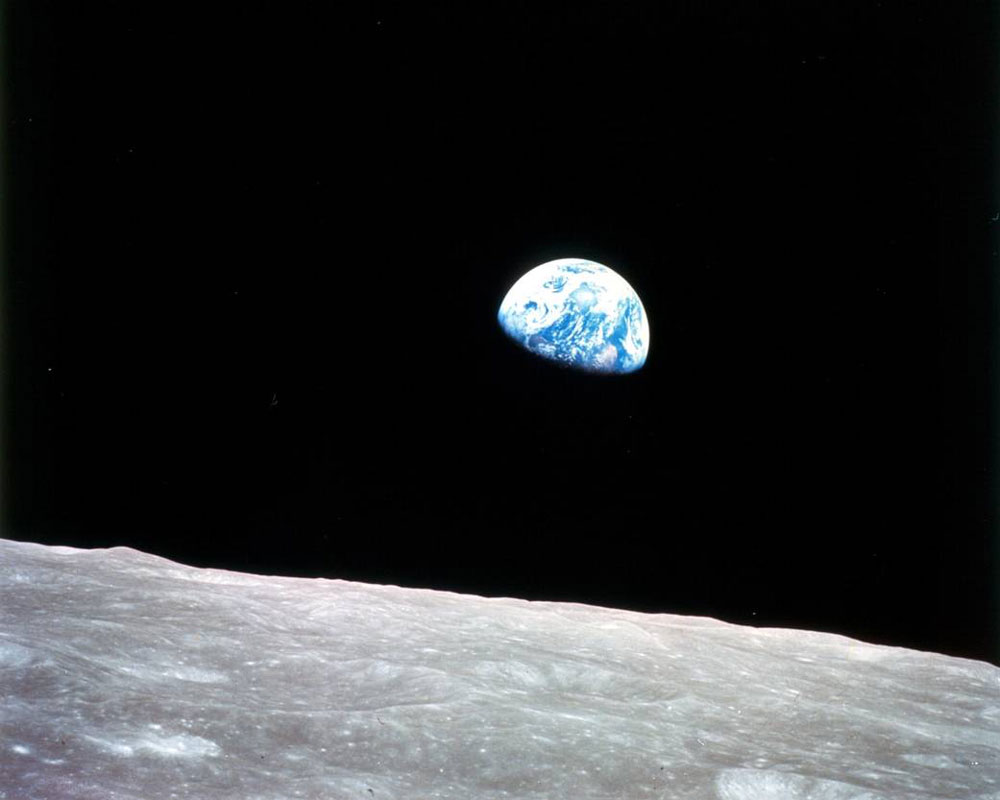 There aren’t any space missions like the Voyagers on the docket for the future, but both spacecraft continue beaming back data going on 40 years and counting. Voyager 1 became the first human-made thing to enter interstellar space, back in 2012 when it passed into the heliosphere, the bubble surrounding our solar system. Voyager 2 is expected to pierce the heliosphere around 2020.

In 2018, the most advanced space telescope ever made—the James Webb Telescope—will peer deeper into the universe than ever before. No doubt, images will once again reshape our perspective of what’s out there, solving mysteries while revealing new ones simultaneously. There’s power in these photos.

Anders’ Earthrise image helped jumpstart the first environmental movement, cementing the idea that our planet is vulnerable. Seeing Earth as a whole, partly obscured in shadow, cemented the “Spaceship Earth” concept forwarded by British economist Barbara Ward-Jackson. To her, Earth was like a starship floating through space with finite resources, and it was up to Earth’s “crew” to manage them carefully.

Only a handful of people will ever behold Earth in its entirety; the rest of will have to rely on secondhand images.

There are probably many reasons why Carl Sagan fought so hard for that photo, and surely one of them was the desire to stare reality in the face, to help us comprehend the incomprehensible. There’s a lot at stake in the world right now, particularly for science. So on a day where we traditionally acknowledge our love for another, remember that this tiny blue mote of dust is all we have.