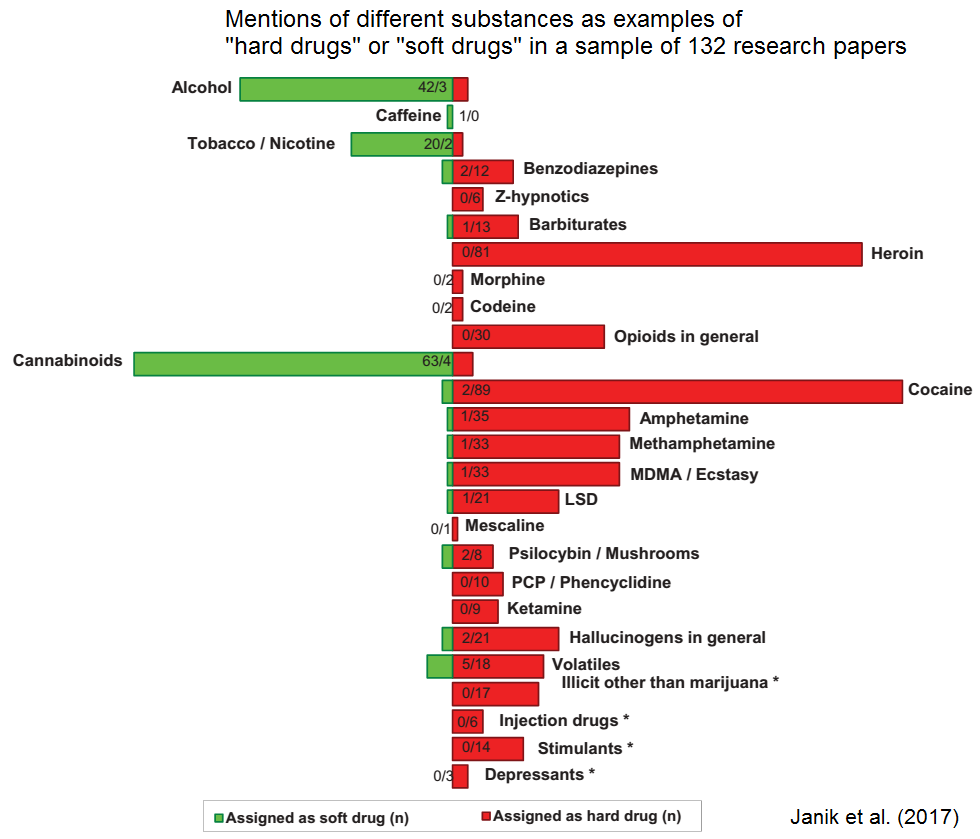 A new study examines the blurry distinction between “hard” and “soft” drugs.

The “hardness” of drugs is a concept that makes intuitive sense, but is difficult to put into precise terms. “Hard” drugs are those which are viewed as more addictive, more potent and more toxic than the comparatively benign “soft” variety. The concept has a normative aspect: “hard” drugs are bad, and you should avoid them, even if you use soft drugs.

In the new paper, Slovakian researchers Peter Janik et al. tried to quantify the perceived “hardness” of various drugs, from alcohol to LSD and cocaine. The authors counted the number of times each substance was listed as a “hard” or a “soft” drug across 132 peer-reviewed research papers that gave at least one such example, published between 2011 and 2015.

The results contained a few surprises:

Cannabis was the most frequently cited “soft” drug while cocaine and heroin were the leading “hard” ones, which is not unexpected. However, I was surprised that hallucinogens such as LSD and psilocybin mushrooms were frequently listed as “hard” drugs, given that these substances are not considered to be addictive or especially toxic.

That cocaine was twice listed as a soft drug, and methamphetamine was also listed as such once, is also a little odd. Cannabis was unexpectedly called a hard drug four times.

Then we come to alcohol, which was listed as a “soft” drug 42 times, and as a “hard” one 3 times. This was surprising to me, as I didn’t expect to see alcohol listed very often in either category. Most people don’t consider alcohol a “drug”, although of course it is one, and if I had to name a “soft drug”, alcohol wouldn’t come to mind.

And how “soft” is alcohol really? Janik et al. note that in terms of toxicity and addictive potential, alcohol is more problematic than many of the “hard” drugs. Presumably, its legal status and widespread use has softened its image.

Janik et al. conclude that “hardness” is a vague concept and that scientists should probably stop using the terms “soft” and “hard”:

Explanations for categorization as ‘hard’ or ‘soft’ are rarely given. ‘Hardness’ or ‘softness’ may refer to different aspects of psychoactive substances and can be perceived differently when comparing only two or a small number of specific drugs rather than the entire spectrum of substances… citations supporting categorization were missing in 90% of the articles.

To avoid confusion in the future, we recommend not using the terms “ hard drugs” and “ soft drugs” in scientific publications unless adequately clarified and precisely specified by authors.