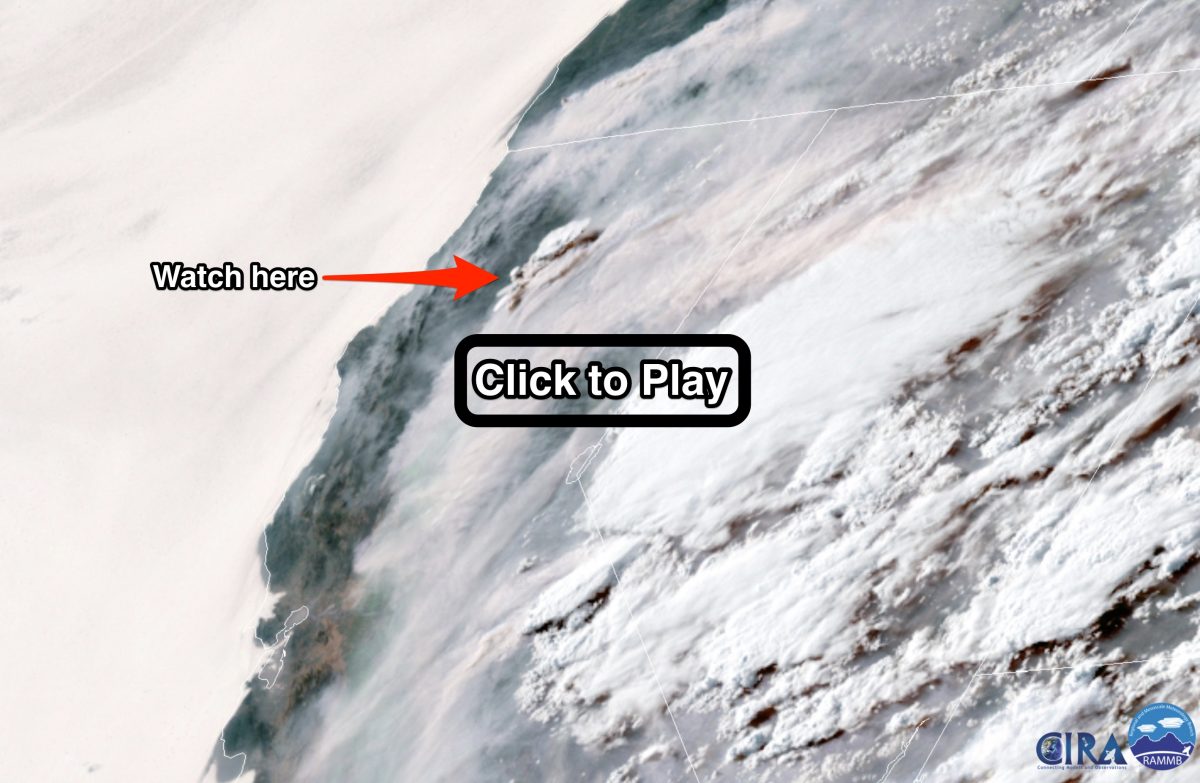 An animation of satellite images shows a giant cloud erupting from Californiaâ€™s Carr Fire late in the afternoon of July 26, 2018. (Note: If the animation does not load after you click on the screenshot, make sure to hit â€˜playâ€™ in the upper left corner of the animation website. If there is a delay, try refreshing the page. Source: RAMMB/CIRA/SLIDER

Moving erratically and with blazing speed, Northern Californiaâ€™s Carr fire tore into the city of Redding late yesterday. By this morning, two firefighters had perished â€” and conditions were ripe for continued expansion of the inferno.

â€œThis fire is making a significant push into the northwestern portion of Redding,â€� said Unified Incident Commander Chief Brett Gouvea during a briefing yesterday. â€œWe ask everyone to heed evacuation orders, and leave promptly. This fire is extremely dangerous and moving with no regard for whatâ€™s in its path.â€�

The Carr Fire exploded from 28,000 acres late Thursday to 44,450 acres by Friday morning. That means the fire expanded by more than half the size of the city of San Francisco.

As of the latest update from CalFire, the inferno was just three percent contained. Sixty-five structures have been destroyed. And at least 37,000 people have been forced to evacuate.

An animation I put together of GOES-16 weather satellite images shows the moment when the Carr Fire exploded late in the day on Thursday. In the screenshot above, Iâ€™ve marked where to look.

Once youâ€™ve got your bearings by looking closely at the screenshot, click on it for the animation. Youâ€™ll be taken to another website to watch it. If it doesnâ€™t begin right away, make sure to click â€˜playâ€™ in the upper left corner. (And if there is a delay, try refreshing the page.) The animation starts at about 7:30 a.m. on Thursday. The massive cloud begins to erupt at about 5:15 p.m.

It is whatâ€™s known as a pyrocumulus cloud. Hereâ€™s an explanation from the Cooperative Institute for Meteorological Satellite Studies:

A pyrocumulus cloud forms from rising air that results from intense heating of the surface by phenomena such as wildfires or volcanic eruptions . . . A big fire produces strong upward moving air currents that carry water vapor and ash upward. The water vapor can condense on the ash forming cloud drops. The vigorous upward motions produce these pyrocumulus clouds that look similar to thunderstorm clouds, which also form due to strong upward moving air.

The tops of these clouds can soar to heights of 30,000 feet! Hereâ€™s what the pyrocumulus cloud generated by the exploding Carr Fire looked like from the ground yesterday: 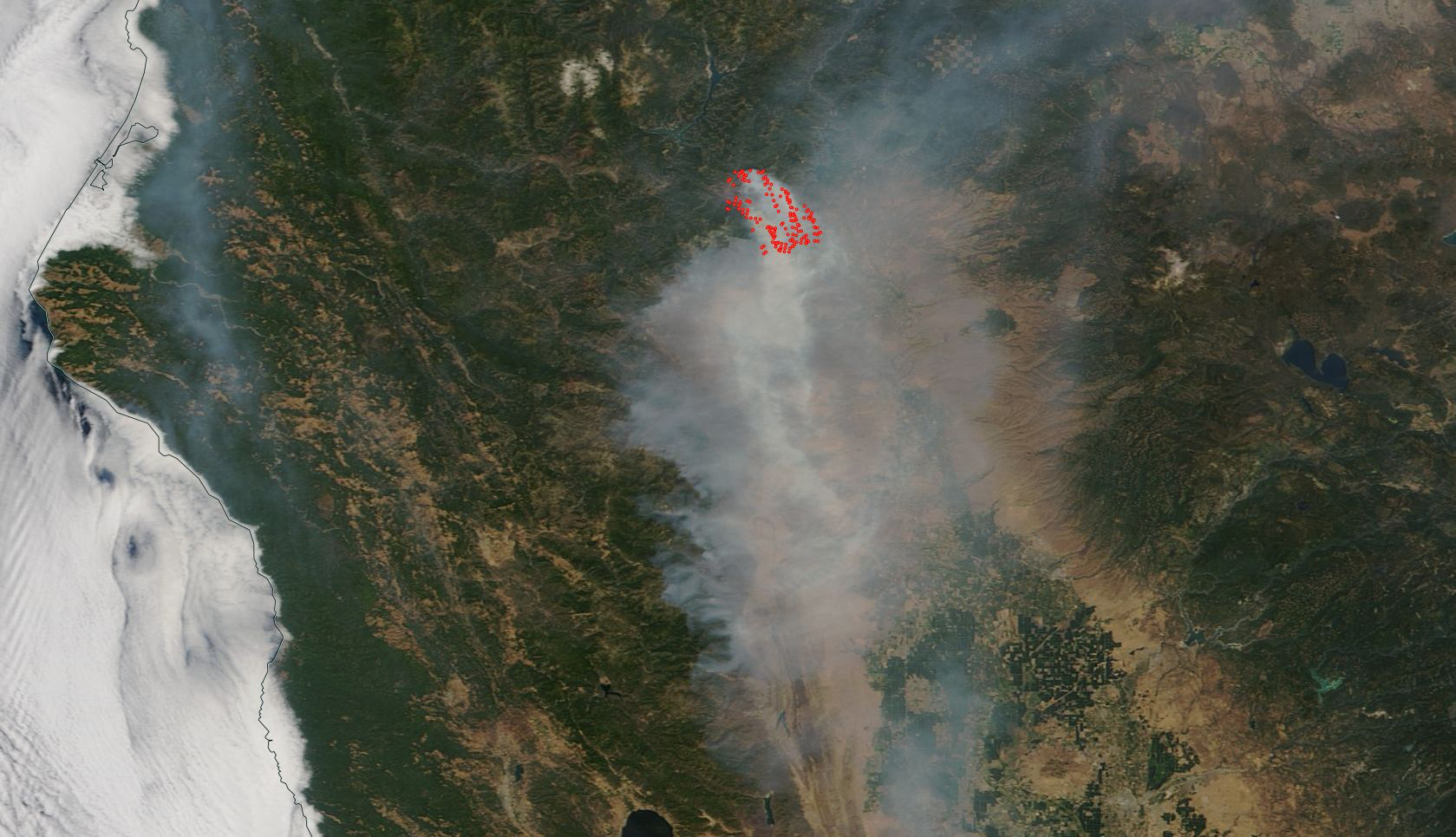 This image of the Carr Fire comes to us via NASAâ€™s Terra satellite. The red dots indicate areas where the satellite detected heat indicative of fire.

Unfortunately, prospects for taming this beast do not look good right now. High temperatures of 110 degrees have been forecast for the Redding area today, and the triple digit heat is expected to continue through Monday. Itâ€™s all due to a stubborn ride of high pressure.

Hereâ€™s a screenshot of the extended forecast for Redding, CA, issued today (July 27) by the National Weather Service:

A screenshot of the extended forecast for Redding, CA, issued July 27th by the National Weather Service.

Addendum: Just after I hit publish, I spotted a story by Associated Press science correspondent Seth Borenstein about researching linking heat, and by implication, wildfires, as well as other kinds of extreme weather, to climate change. You can find it here. An excerpt:

â€œWe now have very strong evidence that global warming has already put a thumb on the scales, upping the odds of extremes like severe heat and heavy rainfall,â€� Stanford University climate scientist Noah Diffenbaugh said. â€œWe find that global warming has increased the odds of record-setting hot events over more than 80 percent of the planet, and has increased the odds of record-setting wet events at around half of the planet.â€�