Watch as a lonely sunspot grows larger than our planet, turns toward Earth, and gets ready to blast hot stuff at us

Actually, it’s a sunspot group, and the active region it is tied too let loose an aurora-causing eruption of hot plasma

I guess I just can’t get enough of time-lapse animations.

A couple of days ago, I was mesmerized by an animation of satellite images showing not just smoke billowing from a California wildfire but also the blaze itself. And yesterday, I was smitten by an animation showing the tiny Martian moon Phobos zinging around the Red Planet.

SEE ALSO: This is just really cool – a time-lapse animation from the Hubble telescope showing a tiny moon zinging around Mars

Today it’s the one above, showing a sunspot group seeming to zip by as the Sun rotates on its access. It’s actually from earlier in July, and since then, the active region on the Sun that this sunspot group is associated with has produced an explosive flare and massive of ejection of solar material out into space.

Here’s a broader view that provides a sense of scale, and also reveals how the individual spots shape-shift over time:

The active region — an area of intense magnetic field — rotated into view and grew quickly in this video captured by NASA’s Solar Dynamics Observatory between July 5-11, 2017. The associated sunspot group was the first to appear after the Sun had gone completely spotless for two days.

The rotation of the Sun on its axis — which is obvious from the two animations above — can cause lines of magnetic force beneath the surface to become twisted over time. And that’s intimately connected to the sunspots as well as the spectacular activity that can occur in those regions.

Here’s a terrific explanation form from Windows to the Universe, produced by the National Earth Science Teachers Association:

The best way to think about the very complicated process of sunspot formation is to think of magnetic “ropes” breaking through the visible surface (photosphere) of the Sun. Where the rope comes up from the solar surface is one sunspot and where the rope plunges into the photosphere is another sunspot.

Meanwhile, the Sun keeps rotating, and those ropes continue to get increasingly twisted, until… SNAAAAP!:

When the tangled fields reach a “breaking point”, like a rubber band that snaps when wound too tight, huge bursts of energy are released as the field lines reconnect. This can lead to solar flares and Coronal Mass Ejections (CMEs).

And wouldn’t you know it — the active region associated with the sunspots in these animations produced both a flare and a CME. Here’s what it looked like to NASA’s SDO spacecraft:

This animation consists of images acquired by a channel on SDO’s instrument designed to detect radiation from materials at temperatures of around 10 million degrees Kelvin, which is about 18 million F.

Here’s another view that emphasizes structures on the Sun in the flaring region:

In this movie, also acquired by the SDO spacecraft, the flaring occurs in the area where super-hot spiraling particles are traveling along magnetic field lines, producing a cluster of loops. (FYI: The video contains quite a lot of data, so it may take a little time to load.)

It was just a medium-sized flare (designated an M2), but it lasted a long time — almost two hours. The loops arc over the active region as magnetic field lines busily try to reorganize themselves after the magnetic field snapped to produce the flaring blast. The images that make up the animation were acquired by SDO in a wavelength of extreme ultraviolet light. 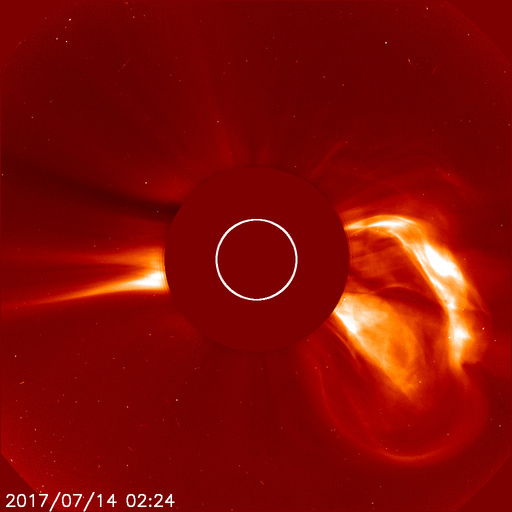 A coronal mass ejection, or CME, from the Sun on July 14, 2017. The Sun is covered so that the dimmer material exploding outward in the CME can be seen. (Source: NASA SOHO)

Just after the flare, a large cloud of charged particles blasted into space. You can see this CME in the image above, acquired by NASA’s SOHO spacecraft.

Last but not least…

The material in the coronal mass ejection was aimed toward Earth — where it triggered beautiful displays of the auroral borealis farther south than usual, including in northern Michigan, as seen in the beautiful animation above.