Watch: Animation of satellite images shows smoke from the Brian Head fire drifting across much of Utah and beyond

A giant smoke plume from Utah’s Brian Head Fire is seen streaming across much of the state and on into Wyoming and Colorado in this animation created from images captured by the GOES-West weather satellite on Monday, June 26, 2017. The white arrow in the first frame marks the location of the fire, near the Brian Head ski resort. (Source: RAMSDIS Online/RAMMB/CIRA)

Those flames lofted giant plumes of smoke that were easily seen by the GOES-West weather satellite. You can see it happening in the animation above, which I created using imagery acquired by the satellite between 7:15 a.m. and 9:15 a.m. Mountain Daylight Time.

Here’s a closer, static view from the satellite: 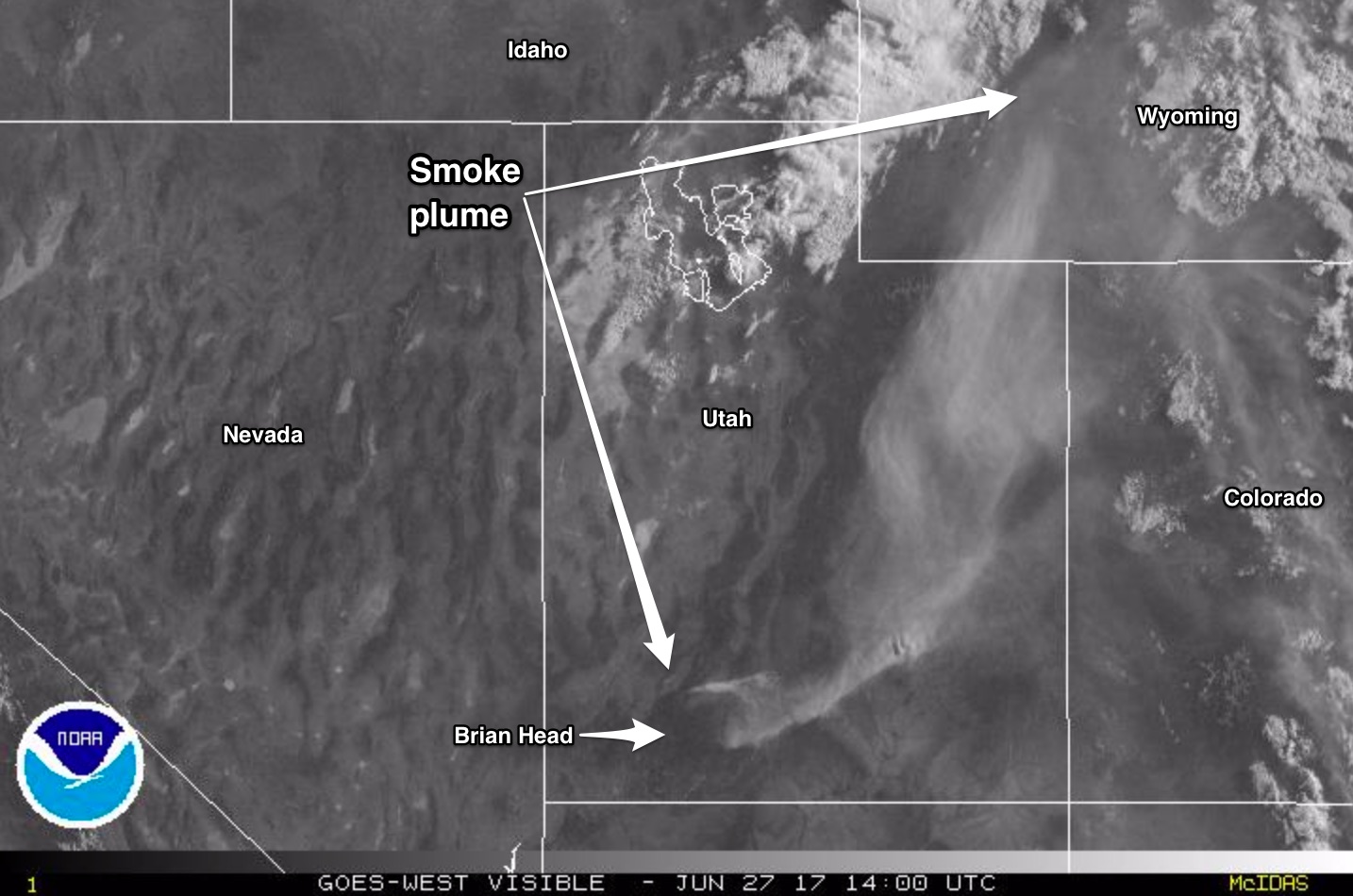 As of Tuesday morning, June 27th, the conflagration has already burned nearly 50,000 acres. That’s an area more than three times the size of Manhattan, making the Brian Head Fire the largest U.S. wildfire this season so far. The blaze has forced 1,500 people to evacuate, and has destroyed 13 homes. The fire got started shortly after noon on June 17th. The cause is human. But specifically what — and who — ignited it is yet unknown. (For the latest official update on the blaze, go here on the InciWeb website.)

The smoke streaming beyond Utah has already been noticed here in Colorado. “A large plume of smoke continues to be emitted from the 49,626 acre Brian Head wildfire in southwestern Utah and is periodically being transported eastward into western Colorado,” according to this morning’s smoke outlook from Colorado’s Department of Public Health and Environment. (For the latest CDPHE smoke outlook, go here.) 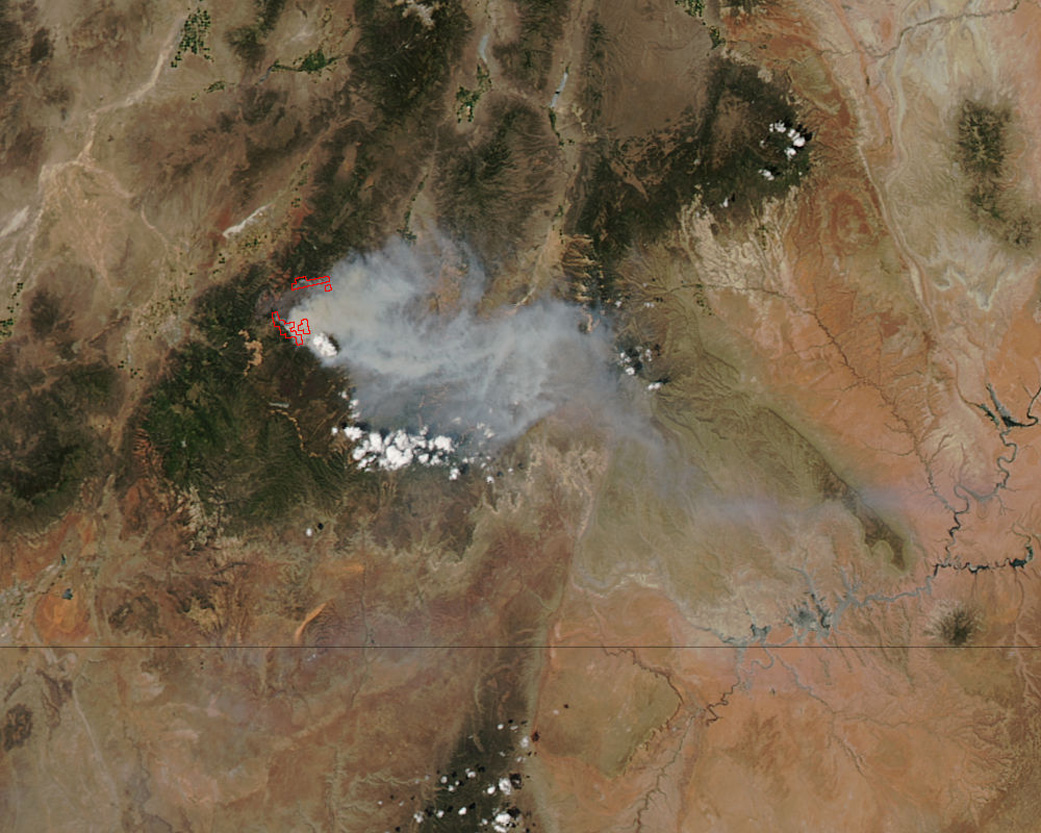 This view from NASA’s Aqua satellite on June 24th reveals what could be a pyrocumulus cloud. Click on the image to enlarge it and you should see the bulbous cloud poking up above lower smoke.

These form when intense heating on the ground triggers powerful updrafts of air carrying water vapor and ash. As the air gets higher in the atmosphere it cools, causing water vapor to condense on the ash. The result: pyrocumulus clouds that look very similar to thunderstorm clouds. That’s no coincidence, because thunderstorm clouds also form as the result of powerful updrafts. (For more on this phenomenon, see “What are pyrocumulus clouds” from the ever-helpful Weather Guys over at the Cooperative Institute for Meteorological Satellite Studies.)

Here’s what one of those clouds looked like on Monday, June 26th from the ground:

As the wildfire season really gets going, I feel that I should salute the brave men and women who are being called on to battle blazes around the country. This image really got me thinking about that:

I find the juxtaposition of these folks posing formally against the out of control conflagration particularly arresting. When I first saw it, I couldn’t help but think that firefighters like this are having to risk their lives across the West because many of us simply cannot resist the temptation to live near and within lands prone to wildfire, known as the wildland-urban interface, or WUI.

It’s a completely understandable temptation, one that I share (but have not acted on). The problem is that wildfires have been getting larger at the same time that more and more people have been moving to the WUI. And that means greater risks for the firefighters like the ones in the photo above.

“Some 32 percent of U.S. housing units and one-tenth of all land with housing are situated in the wildland-urban interface,” according to the U.S. Forest Service. And those numbers are expected to grow in coming years.

Wildfires have been getting larger and more damaging for a number of reasons. The fuels that sustain wildfires have increased, thanks to such factors as overgrazing and efforts to put out low-intensity fires that once kept underbrush and weeds in check. At the same time, the West has been experiencing higher temperatures, widespread drought, and earlier snowmelt.

“Climate change has led to fire seasons that are now on average 78 days longer than in 1970,” according to a 2015 report from the U.S. Forest Service. “The U.S. burns twice as many acres as three decades ago and Forest Service scientists believe the acreage burned may double again by mid-century.”

So it should come as no surprise that firefighting costs have been skyrocketing. “Annual federal wildfire management appropriations in the past decade have been more than triple the annual funding in the 1990s,” according to a 2013 report from Headwaters Economics. Since the early 2000’s, federal wildfire spending has averaged an astonishing $3 billion a year.

In 1995, fire made up 16 percent of the Forest Service’s annual appropriated budget. In 2015, it consumed half of the agency’s budget.  This, according to the Forest Service, is draining resources that could otherwise be used for valuable purposes:

As more and more of the agency’s resources are spent each year to provide the firefighters, aircraft, and other assets necessary to protect lives, property, and natural resources from catastrophic wildfires, fewer and fewer funds and resources are available to support other agency work—including the very programs and restoration projects that reduce the fire threat.

Let’s just hope that the Brian Head Fire isn’t a taste of what’s to come this season.