The Sacrifice of Iphigeneia, a mythological depiction of a sacrificial procession on a mosaic from Roman Spain. (Credit: Wikimedia Commons)

In the Mesopotamian Epic of Gilgamesh, the demigod and his comrade Enkidu rip out the heart of the Bull of Heaven as a gift to the sun god Shamash. This bloody act is far from the only time sacrifice makes an appearance in the world’s most ancient stories, and in some tales such rituals claim human lives, or almost. In Greek myth, King Agamemnon decides to sacrifice his daughter Iphigenia to Artemis as payment for letting the Greek fleet sail to Troy. In the book of Genesis, Abraham nearly sacrifices his son Isaac to God, with an angel staying Abraham’s hand only at the last minute.

But human sacrifice is not merely the stuff of legends: Archaeologists have found evidence of it at sites across the globe. Sacrificial pits that dot the site of Yinxu, the last capital of China’s Shang dynasty, offer one notable example. The earliest Chinese dynasty to leave an archaeological record, the Shang era spanned from about 1600 BC to 1000 BC. More than 13,000 people were sacrificed at Yinxu over a roughly 200-year period, scientists estimate, with each sacrificial ritual claiming 50 human victims on average.

Recent research is deepening archaeological knowledge about the practice of sacrifice through history. This work, which often uses techniques from fields outside traditional archaeology, is offering new insights about the victims — where they were from, what roles they played in society, how they lived before they were killed and why they were chosen to begin with.

These findings, in turn, could help answer more fundamental questions about the functions that sacrifices served and the nature of the societies that performed them.

“Archaeology is all about analyzing the physical remains of human activity, and if you’re talking about religious issues such as beliefs in the cosmos and the supernatural, how do you infer those from physical objects?” he says. “It’s a lot easier for archaeologists to study, say, the economic or political issues of past societies than it is to study what they may have believed about the world and why they did what they did in religious contexts.”

In a 2017 analysis of the carbon, nitrogen and sulfur isotopes in human bones found in the royal cemetery of Yinxu, for example, bioarchaeologist Christina Cheung at Simon Fraser University in Burnaby, Canada, and her colleagues found that those sacrificed probably came from outside Yinxu. 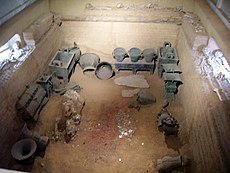 The discovery in Yinxu supported records in “oracle bone” inscriptions — the earliest known writing in China, which typically involved diviners carving questions on turtle shells or ox bones. These inscriptions had suggested that many sacrificial victims were foreigners whom the leaders of Yinxu captured in wars, and the isotopic analysis added physical evidence to back up that scenario. It also revealed that the captives were likely kept at Yinxu for years before they were sacrificed; Cheung and her colleagues suggested that these captives were enslaved as laborers, since it would not otherwise make sense to support them for so long.

“Archaeology has become more and more interdisciplinary, borrowing more and more techniques from other sciences that have allowed us to look into the past with entirely new levels of detail and accuracy,” Cheung says.

Scientists are also uncovering new details about the lifestyles of sacrificial victims. In 2013, archaeologist Andrew Wilson at the University of Bradford in the United Kingdom and his colleagues investigated three roughly 500-year-old mummified bodies discovered near the frozen summit of the volcano Llullaillaco in Argentina. With ages of between 4 and 13, these were separately entombed victims of the Inca child sacrifice practice known as capacocha.

Chemical analyses of the child mummies’ scalp hair revealed that they were given escalating levels of coca leaves and corn beer in the year before their deaths; the oldest, dubbed “the Llullaillaco Maiden,” was even found with coca leaves between her clenched teeth. These findings, along with prior work suggesting that they ate more meat and corn in their final year, revealed that the Inca may have given capacocha victims exalted ways of life before their fates. 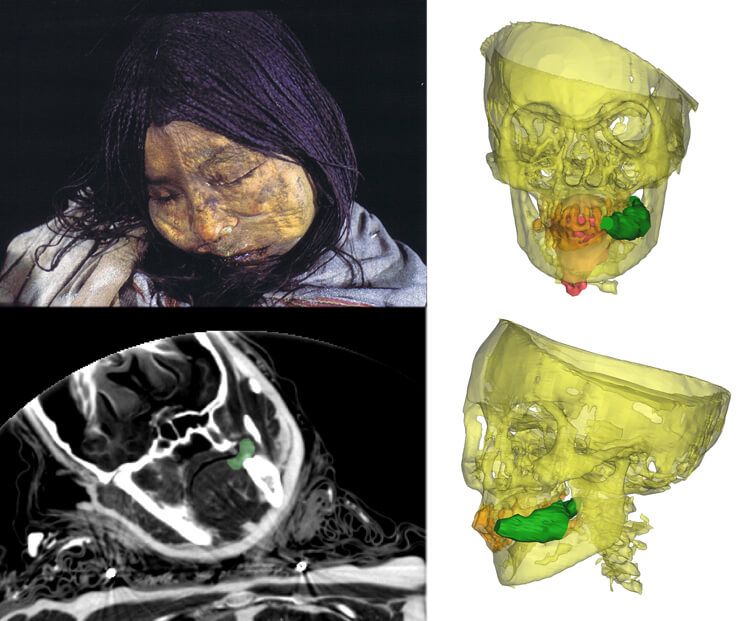 This frozen mummy was found entombed near the top of the Llullaillaco volcano in northwest Argentina. Known as the Llullaillaco Maiden, the 13-year-old was ritually killed in an Inca rite hundreds of years ago. An X-ray image reveals a wad of coca leaves (colored green) clenched between her teeth. (Credit: Redit: A.S. Wilson et al./PNAS 2013 (Photos Johan Reinhard; Ct Scans: Dept. of Forensic Medicine/Univ. of Copenhagen)

Other sacrificial victims endured humbler lifestyles and more dismal ends. Among the Maya — if one assumes that physical ailments suggested lower rank while good health implied elite status —anatomical details such as the number of cavities in teeth suggest that victims typically did not rank among the upper class.

New findings are also overturning some previous interpretations of sacrifices. One example concerns the Royal Cemetery of Ur in what is now Iraq, which dates to sometime around 2500 BC and was excavated in the 1920s. The site contains tombs of ruling-class people, some of them buried with treasures and as many as 74 other people. The latter apparently died to accompany the elites into the afterlife, presumably to serve them, Schwartz says.

One of the site’s excavators, the British archaeologist Sir Leonard Woolley, had suggested that the human sacrifices there voluntarily gave up their lives to serve their superiors in the afterlife, and he proposed that cups found near their skeletons contained poison they took to join their lord or lady. But research in the past decade using computed tomography (CT) scans of the skeletons at Ur has shown that at least some of these people were killed by a blow to a head and were not, perhaps, willing victims.

Recent analyses of the bones of sacrificial victims at Ur also revealed that their bodies were heated and exposed to mercury vapor after death. This was probably done to keep them from decomposing so they could be kept on display in a public setting. The bodies of some were adorned with copper helmets and gold jewelry, and they may have been arranged in a tableau, suggesting that they were dressed in elaborate costumes and posed as participants in a feast, Schwartz says.

All in all, such findings help reveal not only how the victims died but perhaps why they were slain.

“When it comes to the general question of why there was this peculiar, macabre phenomenon where people at Ur were killing up to 70 other people to accompany high-ranking elites to the afterlife, we now know that it was not a voluntary submission of death on the part of the victims, and that it was all part of a show for a large number of people to see,” Schwartz says. “It was an object lesson to everyone — ‘This is the kind of thing that is supposed to happen, and we should all accept that reality.’”

The grisly spectacle the killings provided may have served political purposes. “One pattern we’re seeing across cultures is that the biggest, bloodiest sacrifices are often seen at the establishment of new governments, and scale down once governments become more stable,” Cheung says. “These findings are giving us insight on how cultures maintain social cohesion.”

A key challenge in the archaeology of sacrifice is determining what is actually a sacrifice. In pre-Columbian Mesoamerica, for example, where ritual killing of humans was ubiquitous among the Maya, Inca, Aztecs and others, it can be tempting to identify any evidence of violent death as sacrifice, but researchers may at times consider other explanations, such as mass executions or reprisal killings, Schwartz notes.

One ambiguous scenario where scientists could draw multiple interpretations is the site at Umm el-Marra, in what is now northern Syria, which Schwartz has studied extensively. In a tomb there, Schwartz and his colleagues found a shaft, dug through bedrock, that was layered with animal bodies. At the bottom were 13 people killed by blows to their heads. 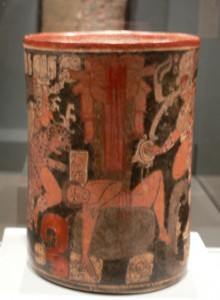 “You can have evidence that a human or animal died a violent death, as in our Shaft 1, but how do you know death was perpetrated as a sacrifice in a religious context?” Schwartz says. “What you can do is look for repeated patterns that something special was going on. The problem at Umm el-Marra is that it’s the only tomb I know of like it. If we find other tombs where we see similar patterns of behavior, we’d have a better idea if sacrifices were happening at Umm el-Marra.”

“Or you can find a feature like our Tomb 1, with two richly adorned women placed above two men with few objects. This might imply the burial of high-ranking women together with sacrificed men of lower rank, but the pattern is unique and therefore difficult to interpret.”

There are many aspects of sacrifice that remain unexplored, and many of them could yield insights about the humanity of the victims. Discarding preconceived notions about gender roles in past societies, for example, could help reveal details that past research overlooked or ignored.

In Mesoamerica and the Andes, Schwartz notes, it is common to find evidence of sacrificed captive warriors. If a female is found among such victims, one might assume that she wasn’t a captive warrior, “but there could, in fact, have been female warriors — we have to entertain such possibilities, and not jump to conclusions,” he says. “For instance, we can look at the bodies of victims to see if they had repeated exposure to wounds as evidence of military activity, regardless of gender.”

In fact, some sacrifice victims may have been considered neither male nor female — there may have been other genders that were recognized by their societies. “DNA studies might identify individuals whose skeletal remains are male or female, but who were buried with objects that are associated with a different gender,” Schwartz says.

Future breakthroughs in the archaeology of sacrifice may come from both new technologies and fresh outlooks, in other words.

“There has been a conscious effort in archaeology to adopt the point of view from more humanistic fields of anthropology — to stop seeing the past as a series of isolated, almost fantasy-like stories, and to try to relate to people on a human level,” Cheung says. “These bones were once living human beings, in many ways much like us.”

This article originally appeared in Knowable Magazine, an independent journalistic endeavor from Annual Reviews. Sign up for the newsletter.