Under The Surf Turf War: Watch Male Lionfish Duke It Out 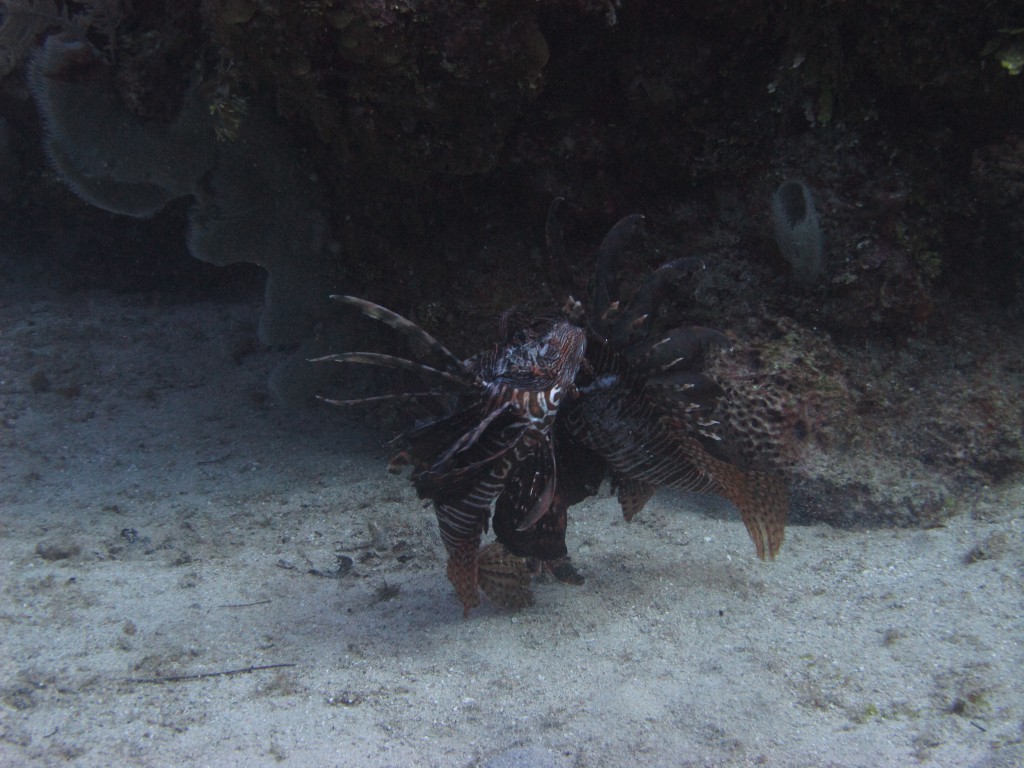 Understanding animal behavior can be tough, as observing individuals for hours can be incredibly boring and our mere presence can affect how they act. Things get even harder when those animals happen to live in the ocean; our inability to breathe water makes quietly sitting and watching creatures significantly more difficult. So it was lucky to say the least that Alex Fogg captured a clear video of two large male lionfish exhibiting a behavior rarely caught on film: battling for dominance.

Fogg, a biologist with Coast Watch Alliance, a non-profit out of Pensacola, Florida, and his girlfriend were on vacation in Roatan, Honduras when they came across the remarkable sight. As avid divers, the pair had spent the week diving from boats, so to mix things up, they decided upon an afternoon shore dive instead. The water was crystal clear, which allowed Fogg to spot a very large, dark lionfish on an isolated coral patch about 75 feet away. When the pair approached, they realized the ‘lionfish’ was actually two, battling for dominance 55 feet below the waves.

“I started taking pictures but quickly switched to video to document the event from when we arrived until whenever it would end,” he explained. Despite getting quite close to the animals, the fish appeared unaware of their sudden audience. The video, which Fogg uploaded to YouTube, documents a brutal battle between two large and aggressive fish:

Lionfish aren’t exactly known for speed; spearfishermen in their invasive range marvel at just how slow they tend to be for a fierce, predatory fish. So, the swift movements of the fighters surprised Fogg, as did the violence. “The two individuals were using their cheek mail to try and abrade and lacerate the others sides, and most of the time, they were pressing their cheeks against each other doing circles in the direction of which fish was pushing harder.” Those cheeks are covered with sharp, bony protrusions that can cause serious damage: 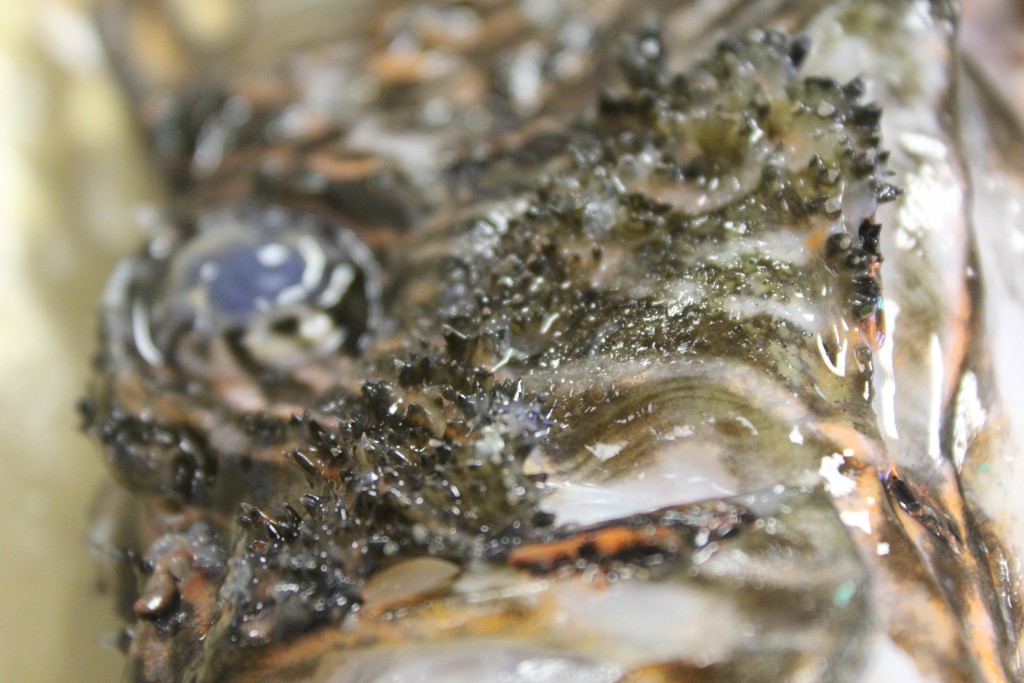 They’re even sharper than they look. Photo Credit: Christie Wilcox

At one point, one of the fish even tries to stab the other with its spines—a fighting tactic that has been witnessed in male-on-male battles in other lionfish species. Polish marine scientist Lev Fishelson published detailed notes (pdf) of fighting behavior when male dwarf lionfish (Dendrochirus brachypterus) were introduced into aquariums occupied by other males. According to Fishelson, a lionfish under attack will sometimes “lower its head and expose the sharp dorsal spines to the attacker at such a speed that the attacking fish collides with them and is badly stung.” The end result of impalement was definitive: “in all instances, the intruding male had to be removed from the container otherwise it was killed.” Moyer and Zaiser similarly noted that between male zebra lionfish (Dendrochirus zebra) “fights are quite common, resulting in numerous broken spines, ripped fins, and other wounds.” The broken spines occur when they ram each other with them, the pair explained. Ill effects from such stings were evident; in one case, an injured male didn’t move for several days after a battle.

The use of venom in such contests is striking because very few venomous organisms are known to use their toxic cocktails for within-species combat. One notable exception is the male platypus, which wields its sharp ankle spurs primarily in contests over females. But outside of platypused? It’s pretty much unheard of. (As my dissertation focused on lionfish, I’m particularly intrigued by the evolutionary implications of such fights. Could differences in the degree or nature of male-on-male battling explain the bizarre differences I found in toxin diversity among lionfish species?)

In the battle above, while it wasn’t clear that any spines managed to penetrate, a winner and loser still emerged. Neither fish swam away unscathed, though. “There was extensive abrasions and lacerations to the sides of both,” Fogg noted. He was able to take photos of each about one minute after the battle ended. The victor remained dark in color, while “the loser had dramatically changed color to a more pale, white coloration.” 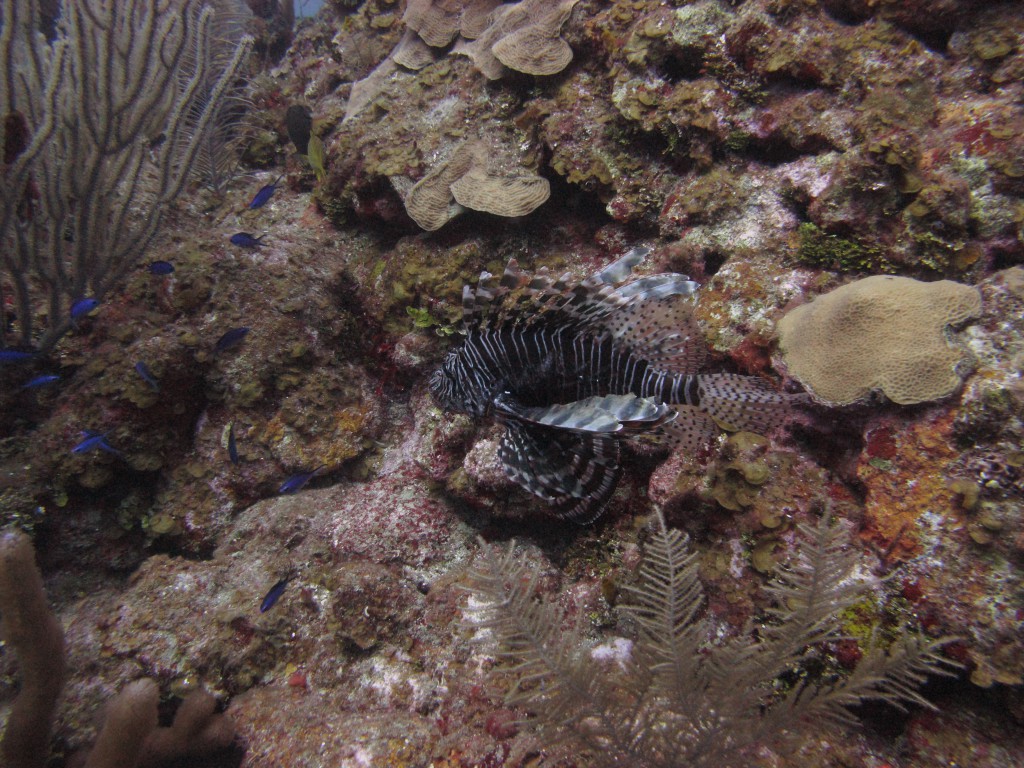 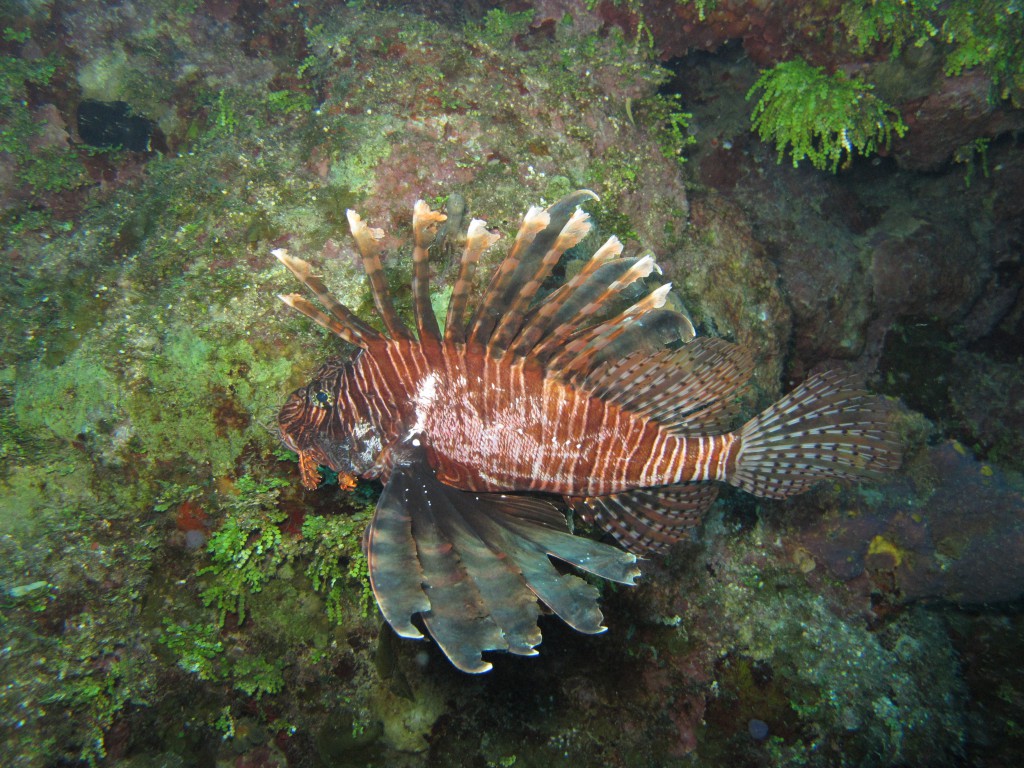 The winner, moments after his victory. Photo Credit: Alex Fogg

What was the fight about? Given the small size of the coral patch, Fogg guesses the tussle was for prime hunting turf. “My first thought was this was a fight over the isolated reef patch they were both occupying, or maybe for food,” he said. Fogg couldn’t be sure, but he didn’t see any other lionfish in the area, and this species tends to spawn at night, so it is less likely the fuss was over a female.

Although Fogg has spent years studying invasive lionfish, he had never witnessed male on male combat. Given the rarity of the sighting, Fogg plans to submit a short write up to a peer-reviewed journal to add his observations to the scientific record. Unfortunately, when Fogg and his girlfriend returned the next day, neither fish could be found, so it’s unclear how they fared after the fight.