Turns out, it *is* a river in Egypt 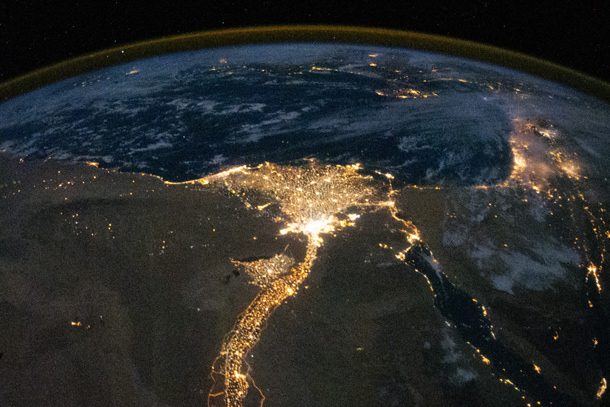 Y’know, when you looked at maps of Egypt in school, you could see the Nile cutting through the desert, but you didn’t get the real perspective of where the people were, what that river means.

Space travel makes that perspective a bit easier to soak in:

That, my friends, is the Nile delta as seen by the International Space Station on October 28. The station was well south of that area, about 800 km (500 miles) south if I’ve done the math correctly. In this oblique view facing north, you can see Cairo at the neck of the delta, the city lights blaring. The Mediterranean Sea dominates the northern (top) part of the picture, with Cyprus glowing above and to the right of the mighty river. Off to the right you can also see Tel Aviv in Israel and Amman in Jordan. The glowing arc at the top is airglow, caused when molecules disrupted by ultraviolet light from the Sun during the day recombine. It’s a thin layer you’re seeing here edge-on, so it looks like an arc of light.

Back on the ground, most of the land area around the river is dark, of course, because it’s desert. But you really get a deep sense of just how important this river is and was to mankind. It was the only source of fresh water for hundreds of kilometers, and it’s obvious why it became not just the center of civilization in the area, but also the foundation for such a great and long-lived one.

Of course, pictures like this are more profound for what you don’t see: country borders. Many astronauts come back from long-duration stays on the ISS with a deep new sense of citizenship not of just their country, but of their planet. I’ve heard several give impassioned talks about this. I sometimes wonder if this may prove to be the long-term benefit of space travel. I’m all for exploration, and getting off this planet to ensure the survival of our species.

But if enough people can get to space, they’ll see the planet for what it is: a fragile, magnificent ball with a thin shell of atmosphere protecting it from the entire Universe… and no artificial boundary lines to be seen. We made those ourselves, and we put an awful lot of stock in them. Remembering that fact might also be an important way to make sure our species endures.