Tuataras and The Question of Living Fossils Seen here through the glass wall of the Southland Museum’s tuatarium on New Zealand’s South Island, Henry the tuatara has been around since the late 19th century. His lineage is much older — the species predates dinosaurs. Credit: G. Tarlach.

New Zealand’s tuataras prove the old adage “if it ain’t broke, don’t fix it” like few other animals on the planet (coelacanth, I’m looking at you). While paleontologists have long differed over the animal’s “living fossil” status, new research suggests the tuatara lineage got its groove some 240 million years ago and never lost it.

Sphenodon punctatus, commonly known as the tuatara, has been puzzling science as long as science has been aware of it: Back in 1831, the animal was initially described as a lizard. Tuataras eventually got their own special spot on the reptile family tree as the last living species of a once-diverse group known as the Rhynchocephalia. These reptiles evolved sometime in the front end of the Triassic, before even dinosaurs were really on the scene.

In the wild today, tuataras turn up only in New Zealand and, more specifically, only on a handful of islands off its coast. It’s yet another long-lived lineage that’s now critically endangered thanks to human activity, including the importation to New Zealand of alien species such as dogs and stoats, who find tuataras totally tasty.

The best way to see the animals is to visit the tuatarium at the Southland Museum in Invercargill, New Zealand’s southernmost city. Several dozen apparently content tuataras hang out there, including the famous Henry, who is probably around 120 years old. By the way, he’s still hale and hearty enough to get with the tuatara ladies on occasion. Long live Henry.

But back to the science. Charles Darwin coined the term “living fossil,” back before even Henry was around, to explain species that persisted, unchanged, even though their nearest evolutionary relatives — with similar physiology and ecological niches — had long since slipped the surly bonds of Earth. For much of the 20th century, tuataras seemed to fit the “living fossil” tag to a T.

Over the past few decades, however, paleontologists have found a number of fossils from extinct members of Rhynchocephalia. Turns out these animals once occupied a wide range of niches, from the aquatic to the terrestrial, with a variety of diets.

The emerging picture of Rhynchocephalia as a diverse, sometimes highly specialized gang of reptiles started to seem at odds with the fact that the one living member, the tuatara, hasn’t changed much since it first evolved. Some researchers grumbled that the whole “living fossil” tag was at best an oversimplification and quite possibly just plain wrong.

Published today in Paleontology, a new study seeks to settle the old debate over the whole living fossil thing. And yes, the authors conclude, the “living fossil” description applies to tuataras. The team crunched a bunch of data about the traits and timeframes of the Rhynchocephalia species living and dead, applying sophisticated statistical modeling to aspects such as evolutionary rate and morphospace.

In addition to being an excellent name for a band, morphospace is a way of placing different variables of an organism’s form on an axis. Sounds fancy, I know, but it’s really just one more tool to compare species and determine the relationships between them.

The team found that tuataras do in fact meet both of the generally-agreed conditions for being a living fossil: having a significantly slower rate of physical evolution and being “morphologically conservative,” another way of saying that any visible changes that did occur were subtle and not much of a deviation from Tuatara Model 1.0. Other rynchocephalians, on the other hand, went bananas evolving specialized tooth shapes as adaptations for their particular diets. 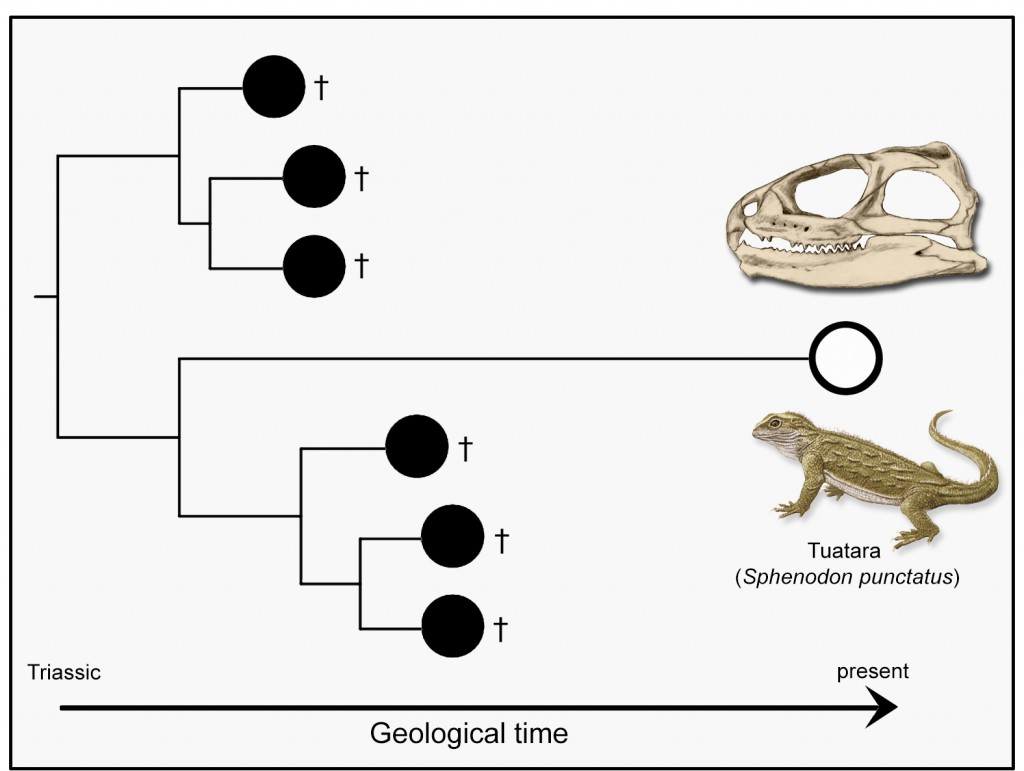 The tuatara evolved before the Age of Dinosaurs…and never really since. The tasteful crosses in this simplified graphic of Rhynchocephalia mark the extinction of its relatives along the way. Credit: Tom Stubbs/University of Bristol.

There is one area of evolution where tuataras are riding in the fast lane: earlier studies looking at the mitochondrial DNA of living and dead individuals have found unusually high rates of molecular evolution. Those findings are not, however, in contradiction with today’s study. The different pace of morphological and molecular changes only show that the two kinds of evolution are not linked. It is quite possible to have changes on a molecular level that don’t result in changes to appearance. The tuataras prove that.

The adorable little animals (yes, I am a big fan) also prove one other adage: slow and steady wins the race. Tuataras in the wild exist on a few small islands off the New Zealand coast; a hundred more, like Henry, live out their days, slowly, at Invercargill’s Southland Museum at the bottom of the South Island. Credit: G. Tarlach