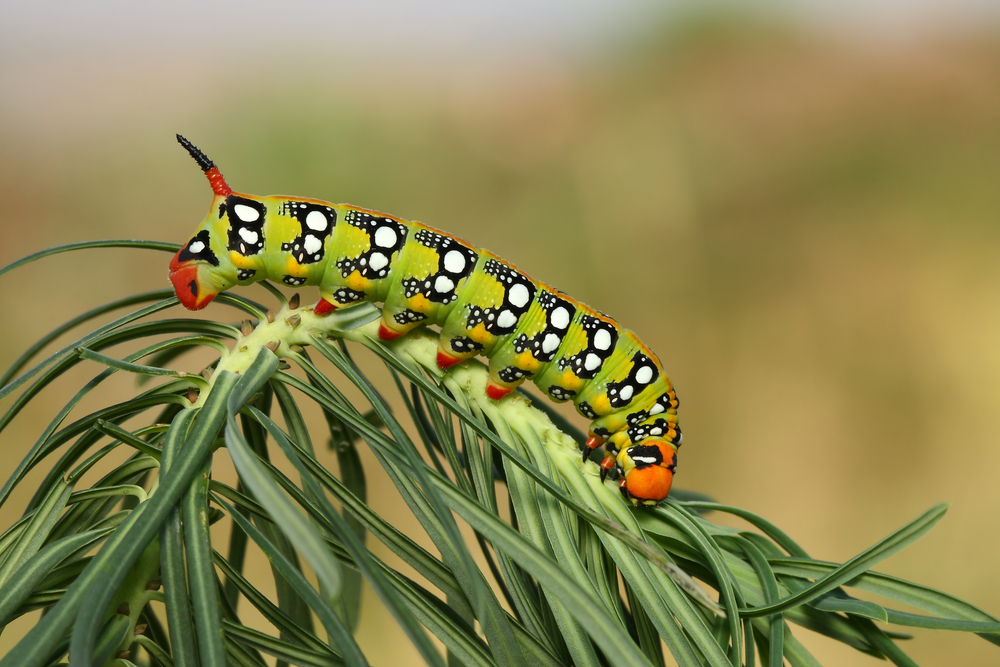 It’s a twist of fate that wouldn’t feel out of place in a horror movie: A platoon of caterpillars, young and hungry, descend on a defenseless tomato plant to feast, but as they begin to eat something goes terribly wrong. The leaves no longer satisfy, and they turn on each other in a cannibalistic frenzy — feeding wildly until just one, sated and content, remains.

You can read it as a Carrie-like moral parable, perhaps, but bringing out caterpillars’ carnivorous tendencies is just sound strategy on the part of tomato plants. Rooted and immobile, plants are easy targets for hungry insects, and they’ve had to develop other means of defense — like causing their predators to go on the offensive against each other. Plants across the family tree emit an array of defensive compounds to protect themselves — some simply make them less inviting, while others cause more insidious effects, such as calling parasitic wasps to lay eggs in the attackers. This happens to be one of the more…colorful…defenses.

Come On, You Know You Want To…

In the case of the tomato plants, they’re simply exploiting a weakness that already exists in their enemy. When under attack they release a compound known as methyl jasmonate that both signals other plants in the vicinity to be on guard and gives their leaves a noxious taste. Caterpillars are known to turn on each other for sustenance when the going gets rough, and by making themselves unpalatable, the tomato plants encourage this behavior.

Cannibalistic caterpillars and proactive plants have been documented for some time, but it wasn’t until now that a researcher put the two together. John Orrock, a researcher at the University of Wisconsin-Madison sprayed tomato plants with varying concentrations of methyl jasmonate and put them in containers with beet armyworms, a common agricultural pest. The more of the compound each plant had been doused with, the quicker the caterpillars turned to cannibalism. Control plants, on the other hand, weren’t able to mount a defense quickly enough and their leaves were totally eaten. On those plants, the caterpillars lived in harmony with one another, spared the gruesome fate of their hungry counterparts.

The plants’ actions work on two levels: they keep the caterpillars away from their leaves, and they reduce the total number of caterpillars as well. The strategy isn’t totally effective, because some caterpillars survive and those that do are typically exceptionally well-fed and more likely to survive. The study was published Monday in the journal Nature Ecology and Evolution.

Orrock hopes that his findings will lead to new strategies for pest control in agriculture, and says that they could elucidate some of the ways that pathogens move through insect populations.

This strategy might not work so well in the real world either, where caterpillars aren’t confined to a single plant and can simply move to the next one if the first doesn’t agree with them. In addition, the tomato plants’ natural release of methyl jasmonate proved to be too slow to halt the caterpillars’ mandibles — by the time they had released the chemical in sufficient amounts, they had already been eaten.

One plants’ sacrifice may be enough to save the rest of the group, however. Compounds like methyl jasmonate function as signals to other plants, telling them to begin preparing their own defense. When the caterpillars arrive, they may be in for a nasty surprise.