Toasty Testicles From Laptops Could Make for Less Fertile Nerds 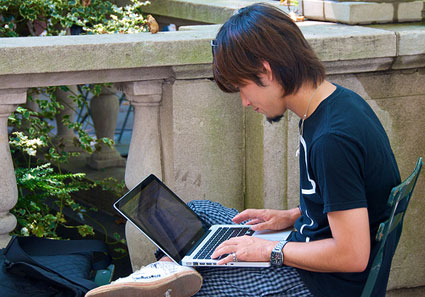 Being a computer nerd just keeps getting worse. Not only can being addicted to the interwebz make it hard to meet chicks, but now research is showing that a man’s relationship with his laptop computer can affect even his most intimate of areas.

The study, titled “Protection from scrotal hyperthermia in laptop computer users,” studied how laptop positioning affected testicle temperature. Participants were asked to sit with a laptop on their knees while the research team monitored the temperature of their scrotum (both the left and right sides).

The three positions they tried were: sitting with the laptop on the lap with legs together, the same position with a laptop pad under the computer, and sitting with legs spread 70 degrees apart. They found that the open legged position was the best at lowering testicle temp (a total of about half a degree on the left, and a little less on the right). As the authors explain in the study’s abstract:

And while a few degrees doesn’t sound so dangerous, it’s actually enough to effect sperm quality (a rise of about two degree Fahrenheit can be an issue), especially given the length of time most people spend with their laptops these days. As the study author told Reuters:

“Millions and millions of men are using laptops now, especially those in the reproductive age range,” said Dr. Yefim Sheynkin, a urologist at the State University of New York at Stony Brook, who led the new study. “Within 10 or 15 minutes their scrotal temperature is already above what we consider safe, but they don’t feel it,” he added.

Since the study only monitored temperature changes, not infertility or sperm quality, the authors can’t say for sure whether laptops will affect the ability to have children. But Sheynkin told Reuters that excessive laptopping could cause reproductive problems, though they aren’t likely to be permanent.

“I wouldn’t say that if someone starts to use laptops they will become infertile,” Sheynkin told Reuters Health. But frequent use might contribute to reproductive problems, he said, because “the scrotum doesn’t have time to cool down.”