Author Vishay SinghPosted on May 3, 2017May 4, 2017Categories Discover Magazine 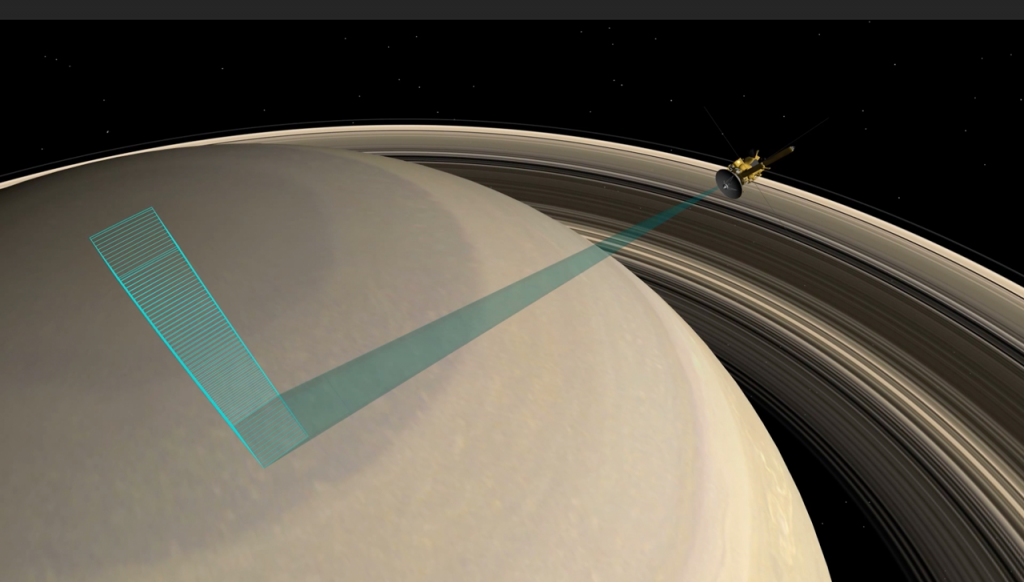 With Cassini already preparing for a third dive between Saturn and its rings, NASA has released this spectacular movie from the first dive

I can’t help it — I’m just enchanted by the imagery coming back from Cassini as it has been swooping through the gap between Saturn and the giant planet’s rings. The latest is the movie above, made from a sequence of rapid-fire images acquired by Cassini as it made its first dive on April 26th.

From NASA’s release about it today:

The movie comprises one hour of observations as the spacecraft moved southward over Saturn. It begins with a view of the swirling vortex at the planet’s north pole, then heads past the outer boundary of the hexagon-shaped jet stream and beyond.

As Cassini captured the footage, it dropped from 45,000 to 4,200 miles above Saturn’s cloud tops. As it zoomed along it got an ever sharper view of smaller and smaller features.

At the beginning of the sequence, each pixel could resolve features no smaller than 5.4 miles miles across. At the spacecraft’s closest pass above the clouds during the sequence, that dropped to just a half-mile!

As you watch the video, you may also notice that the cloudscape passes by ever more quickly. That’s because Cassini was moving with increasing speed as it came closer and closer to the cloudtops.

An illustration of Cassini’s position and orientation above Saturn as the images were being taken, along with the camera’s field of view projected onto the planet. (Source: NASA JPL)

The spacecraft has now completed its second dive. And if all is going according to plan, preparations should be underway for a third one, scheduled for five days from now. (About 11 p.m. PDT on May 8th.)

All of this is part of Cassini’s ‘Grand Finale,’ the final chapter in its epic adventure at Saturn. The Grand Finale will include 22 dives between the rings and the planet, culminating on Sept. 15, 2017. On that day, Cassini is scheduled to dive into Saturn’s atmosphere, putting an end to the mission.

SEE ALSO: Here’s what Cassini heard as it made its daring dive between Saturn and its rings