These Strange Worlds Sit At The Boundary Between Planets And Stars 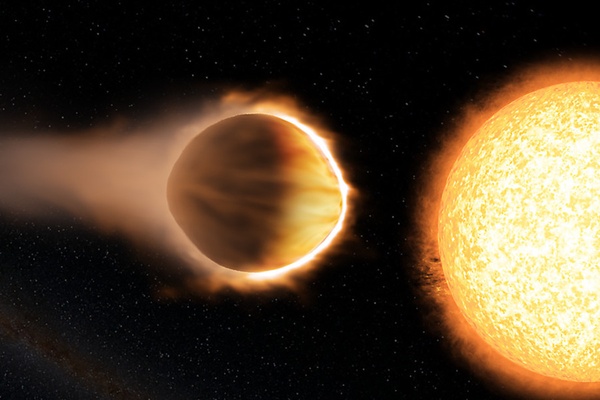 This illustration depicts the exoplanet WASP-121b, an ultra-hot Jupiter that sits so close to its host star that its dayside atmosphere is hot enough to boil iron.
(Credit: Engine House VFX, At-Bristol Science Centre, University of Exeter)

Scattered throughout the cosmos, astronomers are uncovering a strange new class of exoplanets too small to be stars, but too big to be planets. They’re called ultra-hot Jupiters.

These incredibly hot gas giants sit much closer to their host stars than Mercury does to the sun, which causes tidal locking. That means the same side of the planet always faces its star. Dayside temperatures can exceed 3,500 degrees Fahrenheit (1,900 Celsius). Nightside temperatures hover around 1,800 F (1,000 C).

And ultra-hot Jupiters also have weird atmospheric characteristics not seen in other types of planets, like an apparent lack of most molecules.

Despite the intriguing nature of these odd, hellish worlds, scientists still know relatively little about them. However, ew research set for publication in the journal Astronomy and Astrophysics seeks to change that.

In the study, an international team of researchers modeled the atmospheres of four known ultra-hot Jupiters that were previously investigated using the Hubble and Spitzer space telescopes. And based on their work, the team concluded that ultra-hot Jupiters are even more two-faced than astronomers initially thought.

Specifically, these exoplanets’ daysides are so intense that the heat can split most types of molecules into their basic building blocks. And since the molecules are broken apart, they remain hidden from the gaze of even our most advanced observatories. This led the researchers to a surprising conclusion: The dayside atmosphere of an ultra-hot Jupiter resembles a star more than a planet.

Although this result is interesting in its own right, it also helps explain why astronomers only detect water molecules at the day-night border of ultra-hot Jupiters. The team found that as hydrogen and oxygen atoms make their way to the cooler nightside of the planet, they recombine to form water. However, since the nightside is too dark to observe, astronomers can only detect these water molecules right at the border between day and night.

This new research not only sheds light on a little-understood category of exoplanets, but also provides a valuable framework that will help astronomers better understand the physical processes that govern these mold-breaking worlds. And with NASA’s planet-hunting TESS space telescope gearing up to start watching nearby planets, the more we know, the better.