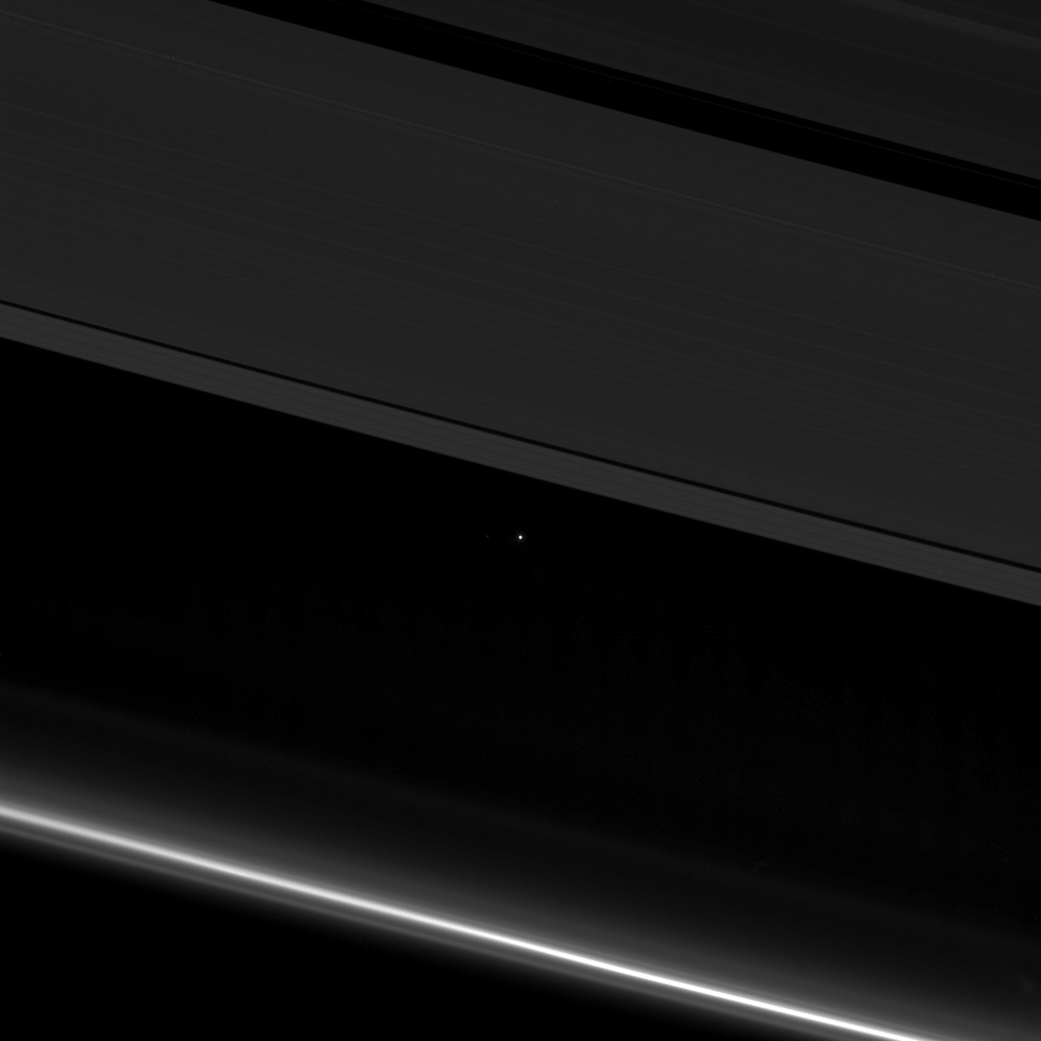 A visual celebration of the home planet, starting with a view from Earth as seen from Saturn — 870 million miles away — and zooming in close

In this image, acquired by the Cassini spacecraft just this past April 12th, the rings of Saturn dominate the view. But see that little white dot? That’s home — 870 million miles away.

On the morning of the first Earth Day, on April 20th, 1970, a friend and I boarded the IRT subway line in Brooklyn and headed for Manhattan. Our destination: Fifth Avenue, where New York City’s festivities were to take place. 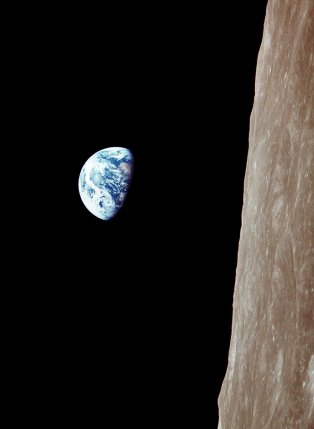 I don’t recall ever having heard the term “home planet” back then. Yet the basic idea already had great currency, thanks to the iconic image of the Earth rising above the limb of the moon, shot by Apollo 8 astronaut William Anders on Christmas Eve of 1968. The late and great landscape photographer Galen Rowell is said to have described it as  “the most influential environmental photograph ever taken.”

In fact, it may well be one of the most important photographs ever taken, period. That’s because it helped us realize that we humans live on a finite planet, “spaceship earth,” as some called it, and that if we didn’t take care, we could foul it beyond repair.

As Apollo 8 astronaut Jim Lovell put it in a live broadcast from lunar orbit:

The vast loneliness is awe-inspiring and it makes you realize just what you have back there on Earth.

While riding the train to Manhattan on that morning of the first Earth Day, I was a mere 14 years old. The word “excited” doesn’t really touch how I felt about the prospect of  participating in a constructive, uplifting, unifying event. This, after many years of divisiveness and violence surrounding America’s participation in the Viet Nam War, still ongoing at the time. 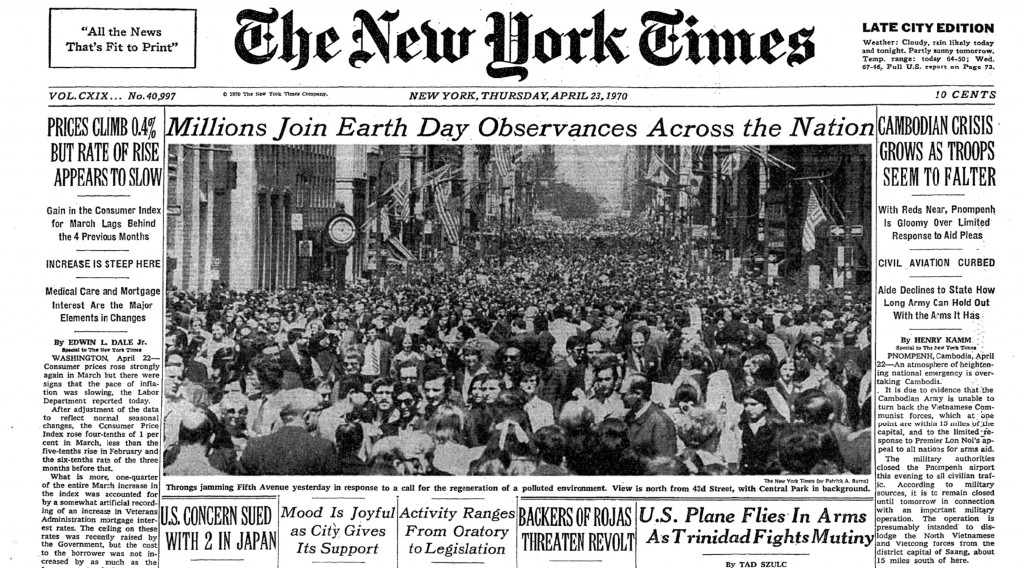 After emerging from the subway and walking over to Fifth Avenue, we were stunned by what we found: a sea of humanity moving in waves down the avenue. There were hippies and activists enjoying the same ebullient mood as suit-clad businessmen. There were secretaries and construction workers too, along with elderly folks, families with babies in strollers, and junior-high-schoolers like myself.  The crowd was mostly, but not entirely, white.

The next day, this is how the remarkable event, celebrated across the United States, was described by legendary N.Y. Times reporter Joseph Lelyveld:

Huge, light-hearted throngs ambled down autoless streets here yesterday as the city heeded Earth Day’s call for a regeneration of a polluted environment by celebrating an exuberant rite of spring.

If the environment had any enemies they did not make themselves known. Political leaders, governmental departments and corporations hastened to line up in the ranks of those yearning for a clean, quiet, fume-free city.

For two hours, except for crosstown traffic, the internal-combustion engine was barred from Fifth Avenue between 59th and 14th Streets; the only wheeled vehicle to do down the avenue during this period was a horse-drawn buggy carrying members of a Harlem block association.

Now it’s 47 years later, and the bipartisan consensus on environmental protection that has endured all these decades is fraying. But my primary motive in putting together this post is not political. Rather, it’s celebratory. We’ve come so very far in what has really been a very short span of time, in part because most of us have come to see Earth for what it is: the home planet, our only one.

So let’s celebrate! — with compelling images of this beautiful planetary body.

We’ve already started with the remarkable image at the top of this post. It shows Earth as a tiny white speck, as seen by the Cassini spacecraft from 870 million miles away. I feel that it kind of puts things in proper perspective.

What follows are other views, taken from progressively closer vantage points. Some, like the first one below, I’ve published before here at ImaGeo. Others I’ve found while perusing NASA’s wonderful Earth Day Image Gallery feature. 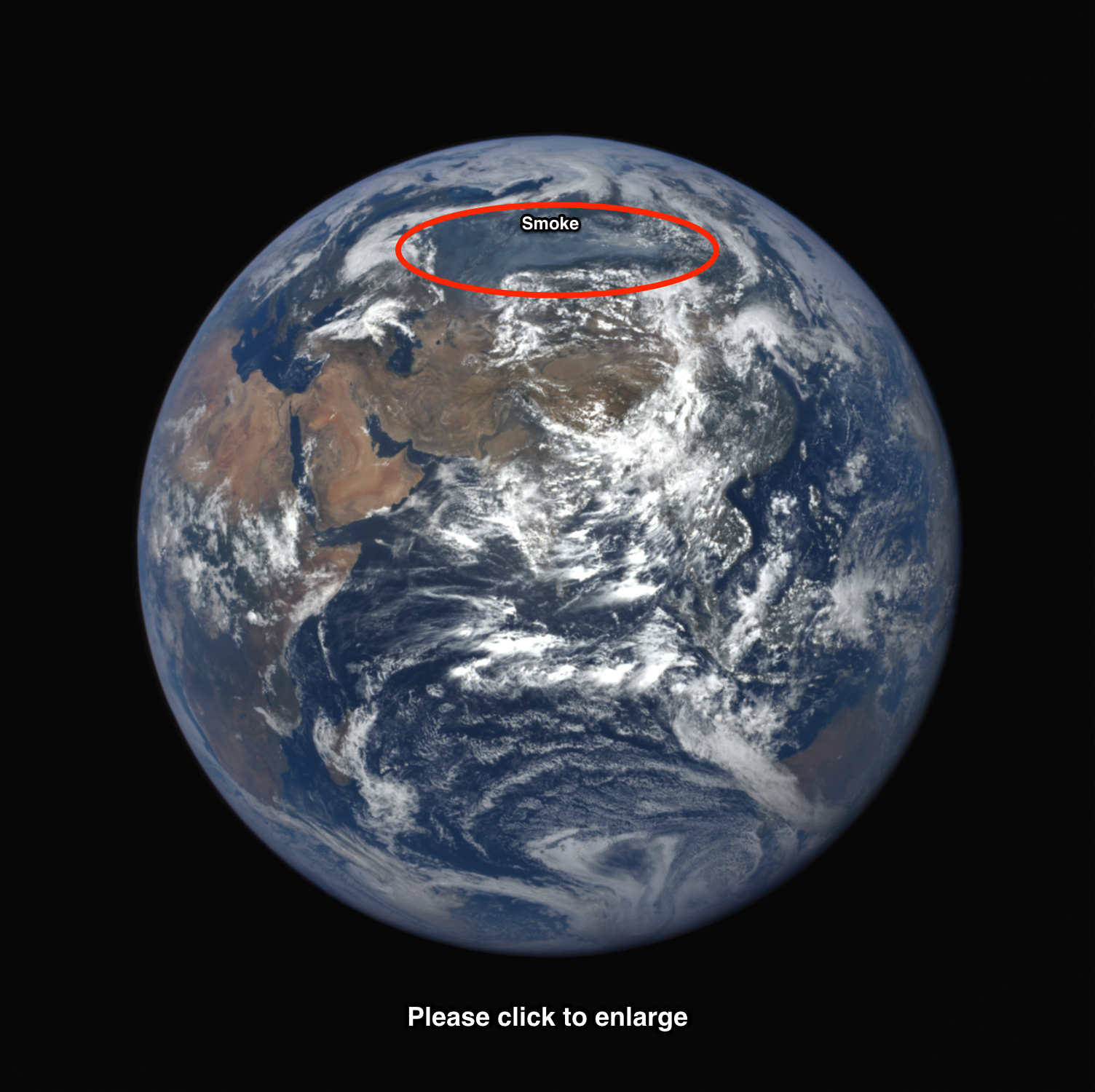 This image of Earth was acquired by the DSCOVR spacecraft when it was 975,074 miles from Earth on 7/21/2016. Bluish-gray wildfire smoke over Siberia can be seen within the circled area. Make sure to click the image to open it in a new window, and then click on it again to enlarge it. (Source: NASA)

I published this arresting image back on July 22, 2017.  It is one of the most clicked-on posts here at ImaGeo, possibly because people are intrigued by the idea of a wildfire so large that it can be seen from almost a million miles away.

SEE: A blanket of smoke from fires in Siberia is so huge it can be seen from nearly 1 million miles away in space 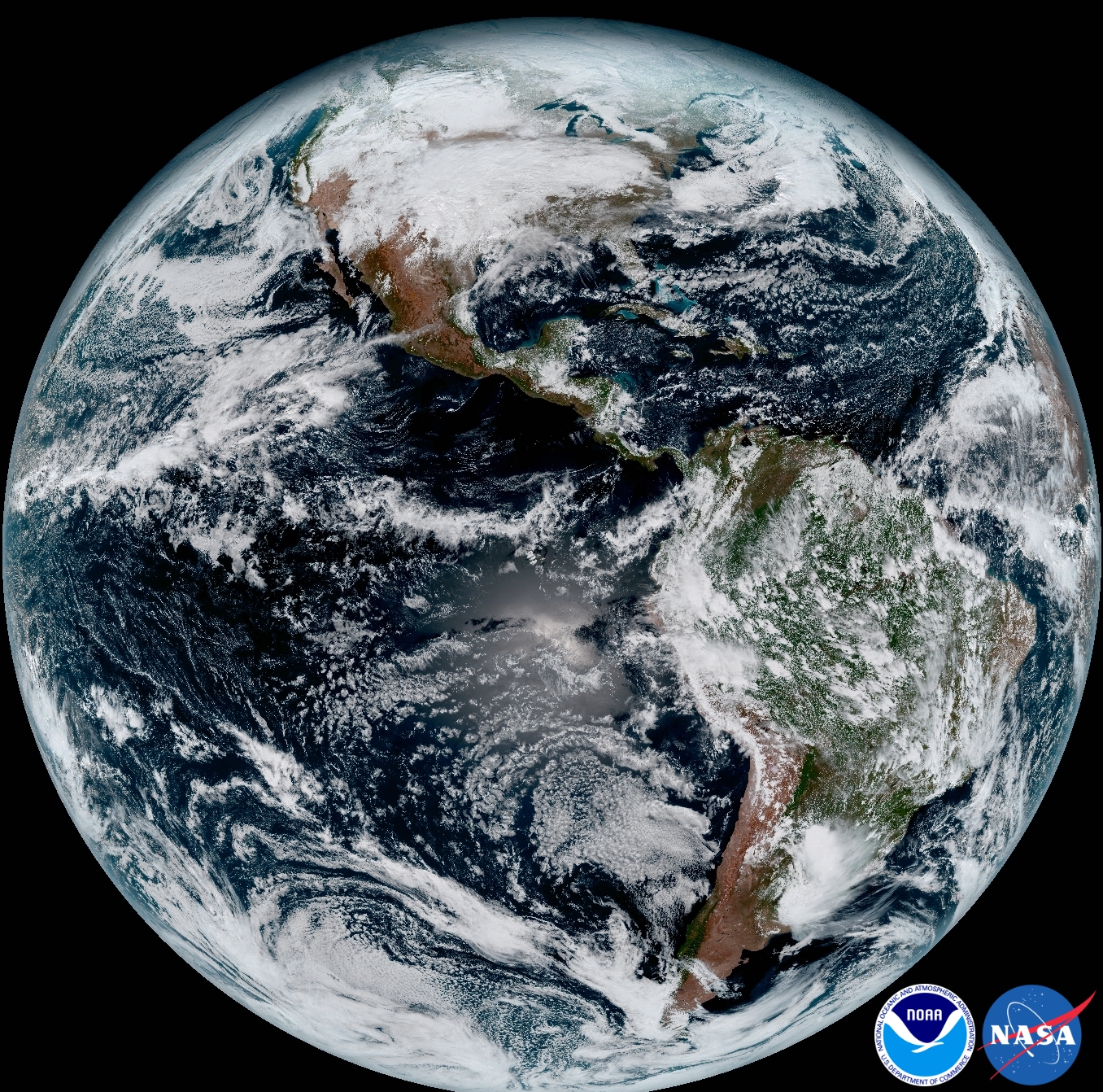 The home planet, as by the GOES-16 weather satellite. (Source: NASA)

We’ve now zoomed in much closer to Earth — geostationary orbit, which is 22,300 miles above the surface. This stunning picture is actually a mosaic of multiple images acquired by the GOES-16 weather satellite on on Jan. 15, 2017. It’s the first full-disk view of Earth from the new satellite. Launched on Nov. 19, 2016, GOES-16 is designed to provide continuous imagery and atmospheric measurements of Earth’s Western Hemisphere. I first published it here at ImaGeo on Feb. 9, 2017. 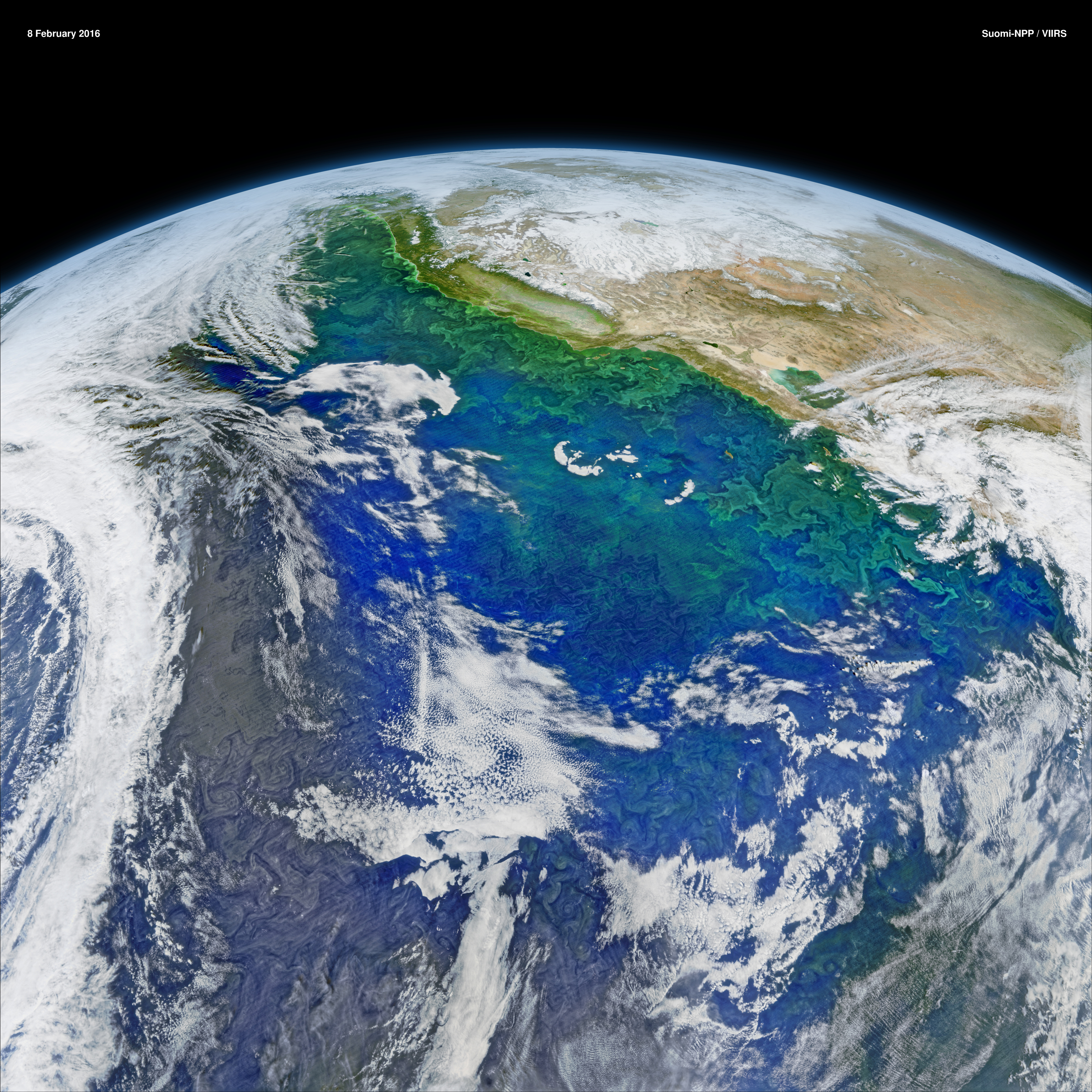 Moving closer to Earth still, we’re now seeing a false-color view from orbit 518 miles above Earth. This is a composite made with images acquired on Feb. 8 2016 by the Suomi-NPP satellite. With arresting color enhancements, it reveals the complex distribution of phytoplankton along the western coast of North America.

These waters, part of the California Current system, are among the most biologically productive in the world. This is thanks in large part to upwelling that brings cool, nutrient-dense waters up from the depths. These conditions promote the growth of plant life in the sea, from microscopic phytoplankton to dense kelp forests.

You can think of phytoplankton as the grass of the seas, with zooplankton — microscopic animals that feed on them — serving as the cows. The zooplankton, in turn, are consumed by fish, which are eaten by seals, which themselves are gobbled by killer whales. And these various species are just some of the components of a complex food web that has at its center the primary producers: phytoplankton. 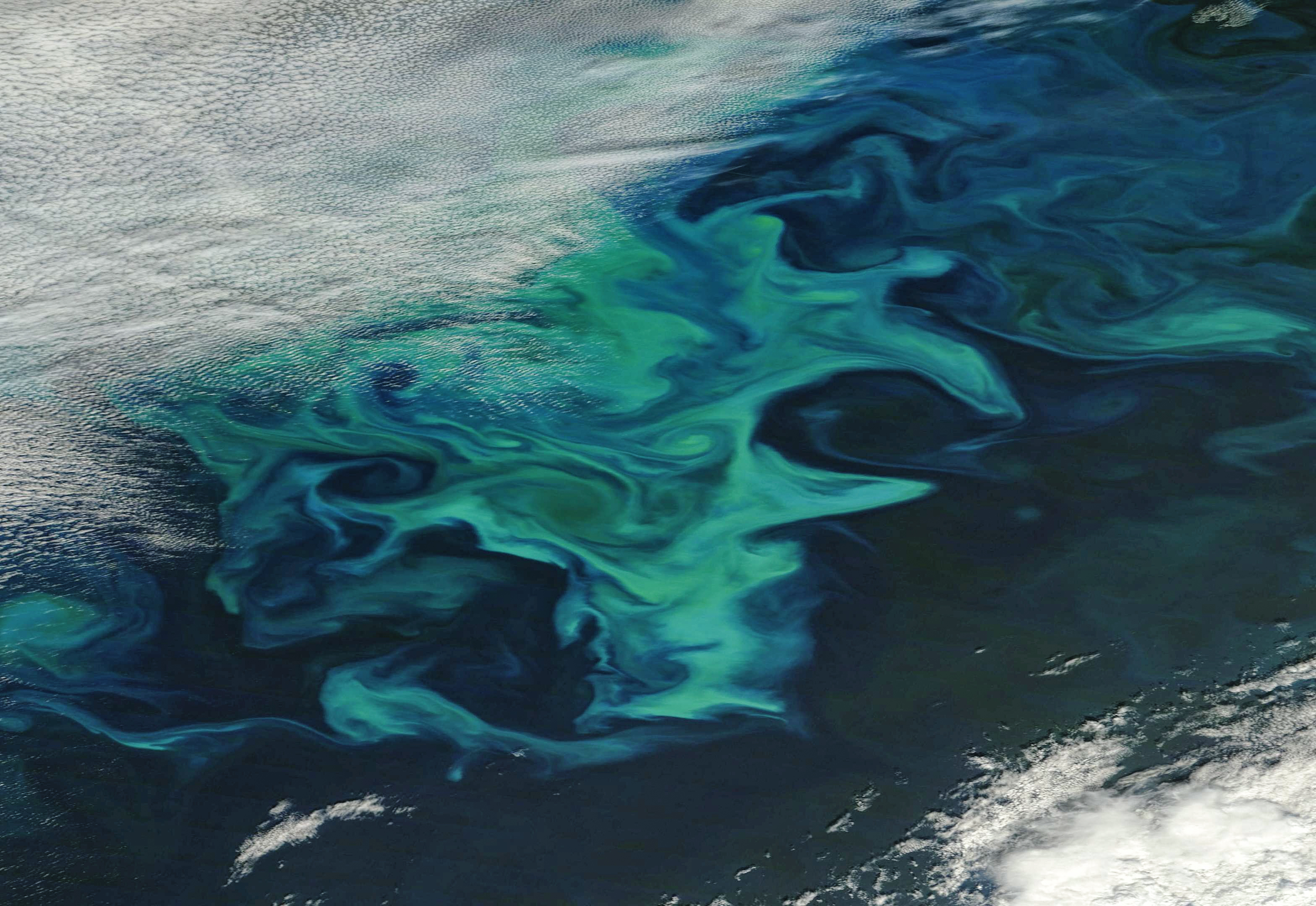 Here’s another image of phytoplankton, this one captured by NASA’s Terra satellite in an orbit 433 miles high, a wee bit closer to the surface than Suomi-NPP. I published this one back on June 6, 2016. This bloom off Iceland is typical of far northern waters, where an explosion of microscopic plant life in spring provides the sustenance for entire marine ecosystems — in some regions all the way up to the polar bears. 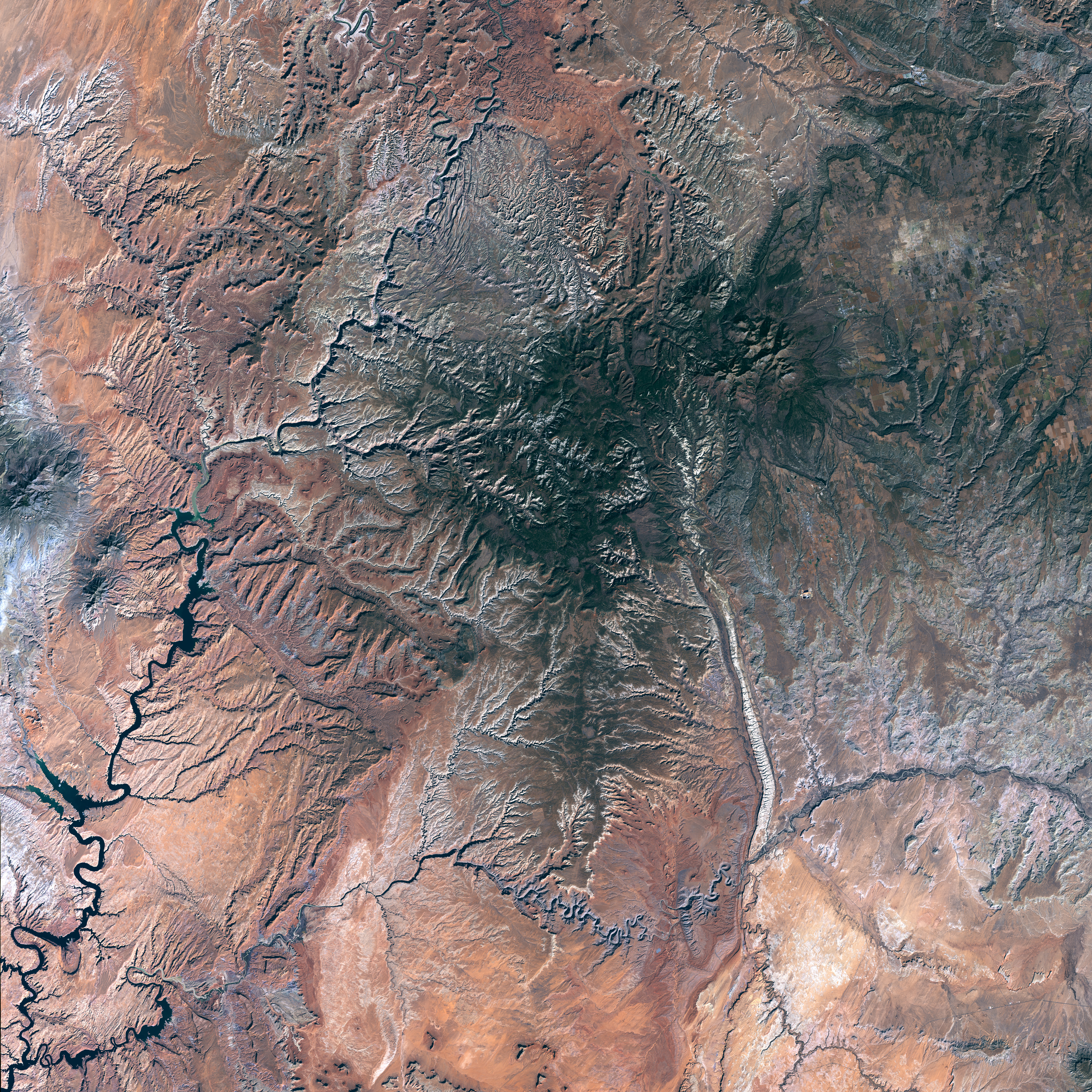 We’re still a bit more than 430 miles above Earth, this time enjoying a view of what is now Bears Ears National Monument in southeastern Utah. I actually created this image using raw data gathered by the Landsat-8 satellite on November 11, 2016. And I first published it on Dec. 29, 2016, the day after former President Barack Obama declared the area a national monument.

Its fate is unclear. Utah’s Republican lawmakers are urging the Trump administration to rescind the designation of the federal land as a national monument. (It’s unclear whether this would be legally permissible.)

SEE: As seen from space: the sacred lands of Bears Ears — now protected as a national monument 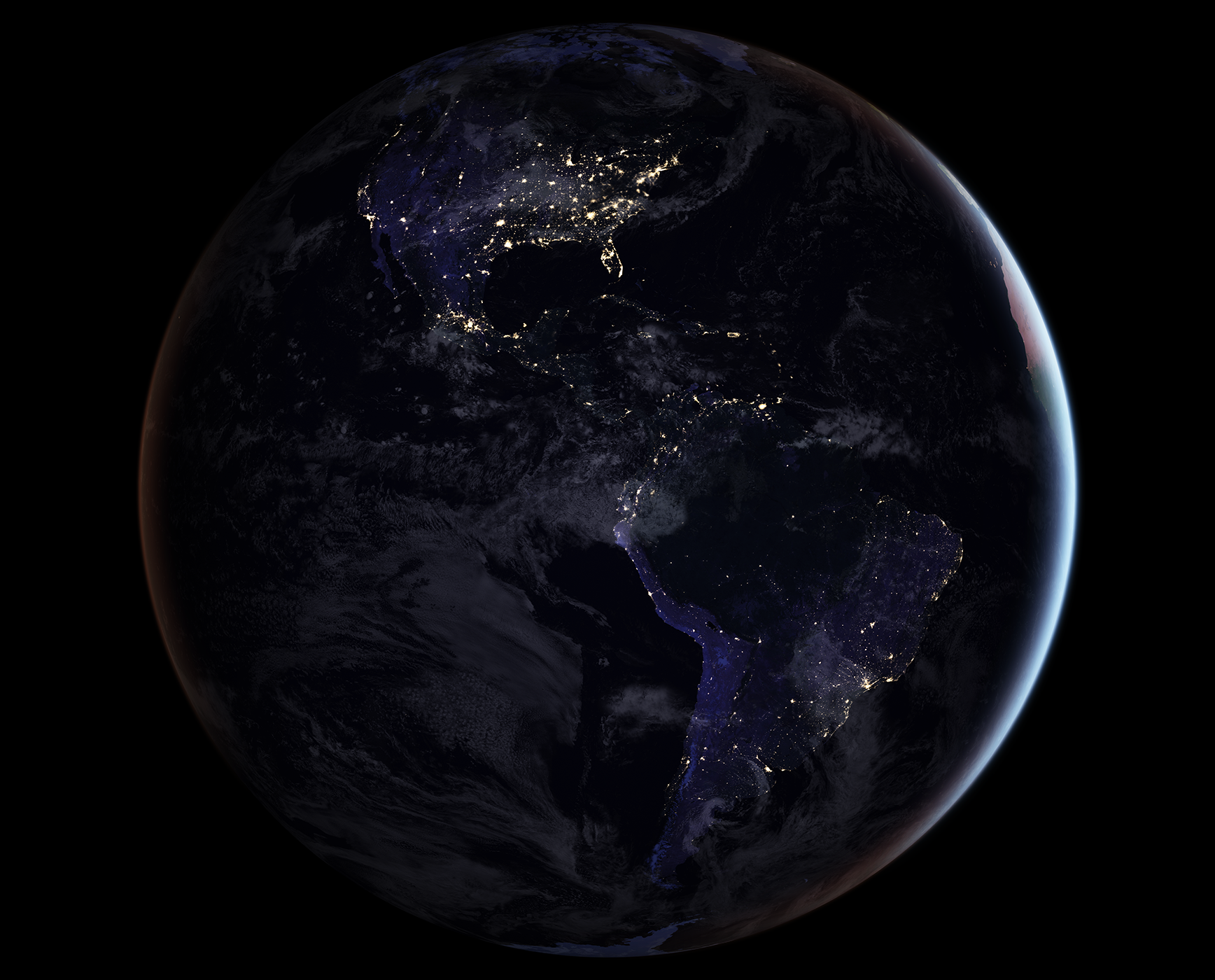 Although the view is zoomed back out again, we’re still at about the same height above the home planet as the previous three images. You’ve probably seen images like this of Earth at night as seen from space. But this one, compiled using data from the Suomi-NPP satellite, is pretty much brand new (published by NASA on April 12th). I think it’s also very special.

To see why, make sure to click on the image, and then click again. You’ll zoom in real close. When you do, explore. It’s really cool! For details about how the image was created, check out this NASA feature: New Full-hemisphere Views of Earth at Night. 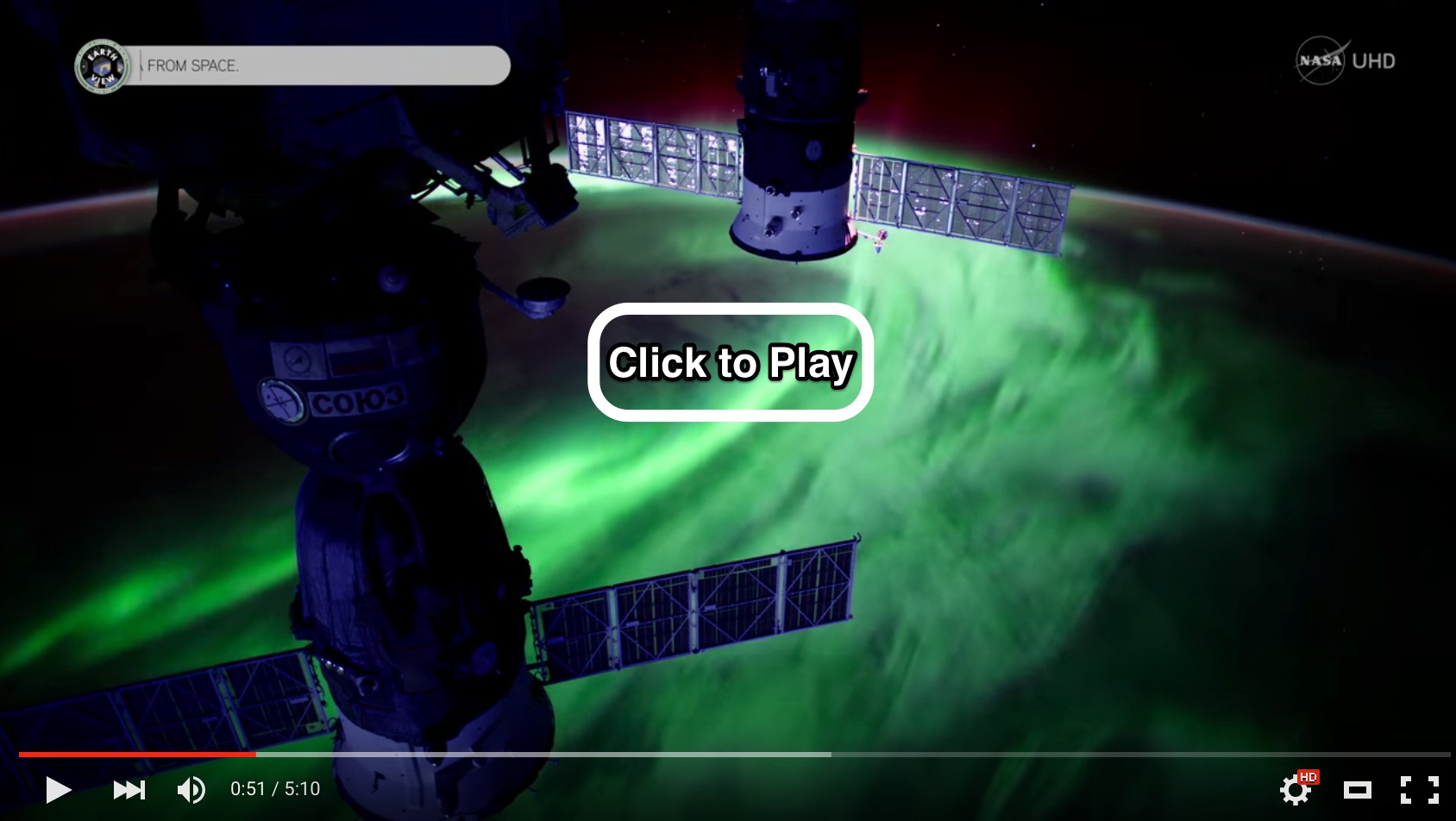 Screenshot from a compilation of ultra-high definition time-lapses of the aurora borealis shot from the International Space Station. (Video: NASA)

Now we’re 249 miles above the surface of the home planet, aboard the International Space Station and looking down as the glowing green curtains of the aurora borealis shimmering in Earth’s atmosphere. Make sure to click on the image to watch an unbelievable timelapse. And also please see this: Take a deep dive — visually and scientifically — into the spectacle of auroras.

The IMAGE satellite captured this animation of the aurora australis, also called the southern lights, on September 11, 2005. The ring of glowing auroral light over Antarctica occurred four days after a powerful solar flare hurled plasma towards the Earth. The IMAGE observations of the aurora have been laid over NASA’s satellite-based Blue Marble image. (Source: NASA Earth Observatory) 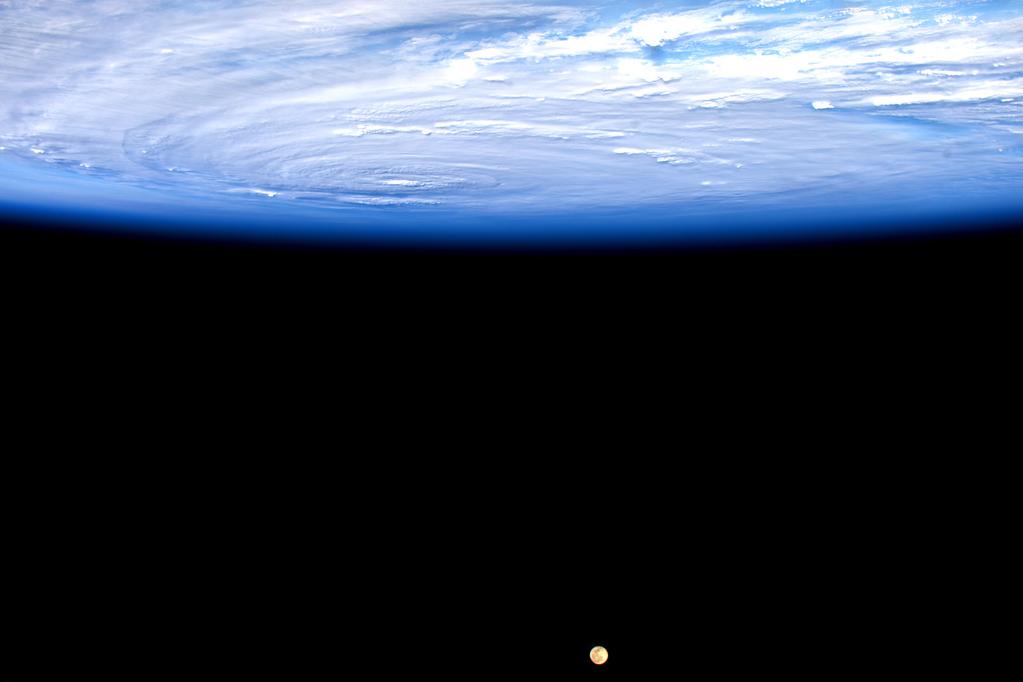 Here’s another one from the space station. I love it because of the Moon, and the perspective — upside down for those of us on Earth, but in the zero-g of orbit, there is no such thing, really, as up or down.

In the photograph, shot by astronaut Scott Kelly, Hurricane Jimena swirls in the Pacific Ocean. In a Tweet on Sunday, Aug. 30, 2015, Kelly described it as massive. “Makes the moon look puny,” he wrote. The storm peaked as a Category 4 hurricane with maximum sustained winds of 150 mph on Aug. 29, 2015. 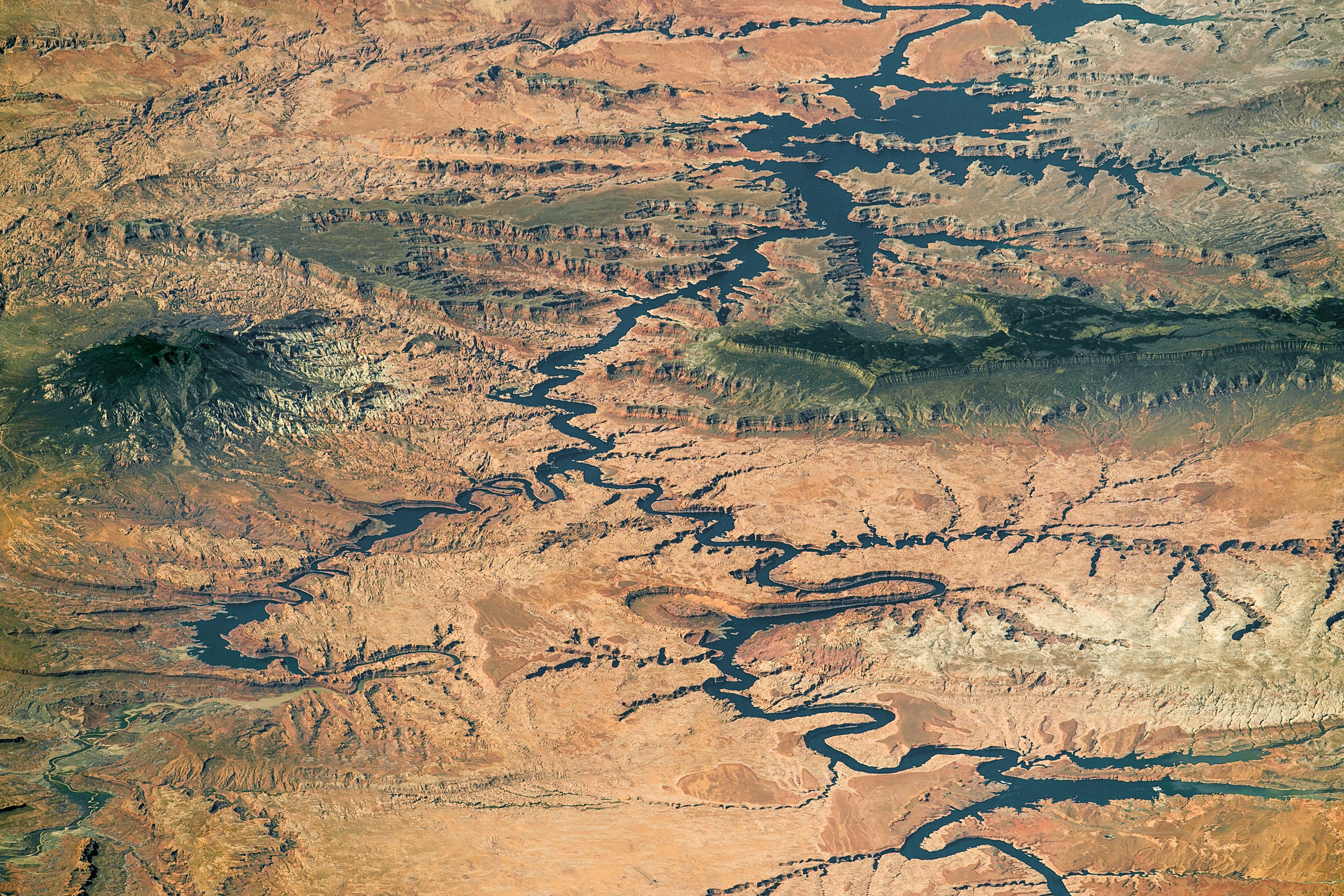 Photographs shot by astronauts from the space station are often incredibly dramatic, especially ones shot at an oblique angle like this one is. I think is among the most stunning I have ever seen. You really need to click on it to fully appreciate it.

This panoramic image shows nearly the full length of Lake Powell in southern Utah and northern Arizona. It was photographed by an astronaut aboard the International Space Station, on Sept. 6, 2016. The station was north of the lake at the time, so south is at the top left of the image. I have published it here at ImaGeo before, on Feb. 7, 2016.

SEE: Check out this breathtaking view of the Colorado Plateau, as seen from the International Space Station 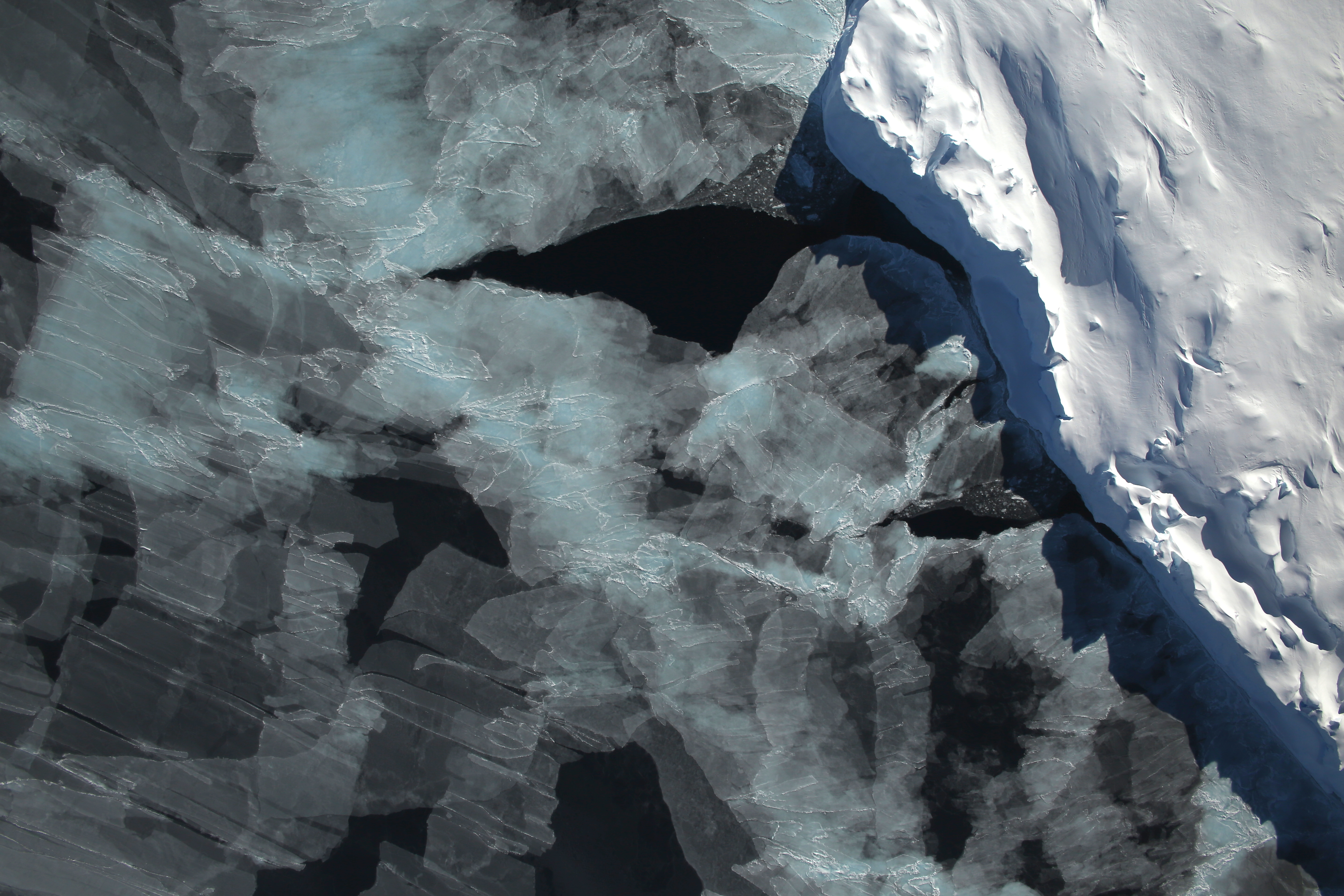 We’ve finally arrived back at the home planet — or at least very close to it. This image was shot from an aircraft flying over Antarctica’s Bellingshausen Sea in 2014 as part of Operation Ice Bridge. A small hole in the clouds revealed newly formed sea ice next to an ice berg on a Nov. 5, 2014.

If it weren’t for the iceberg, the patterning and coloring of the ice give the impression of an abstract work of art. Only the iceberg gives a clear clue that we’re looking at something very real — a beautiful manifestation of physical processes on this stunning planet we call home.