There&#039;s Frost on the Moon — and All Across the Solar System 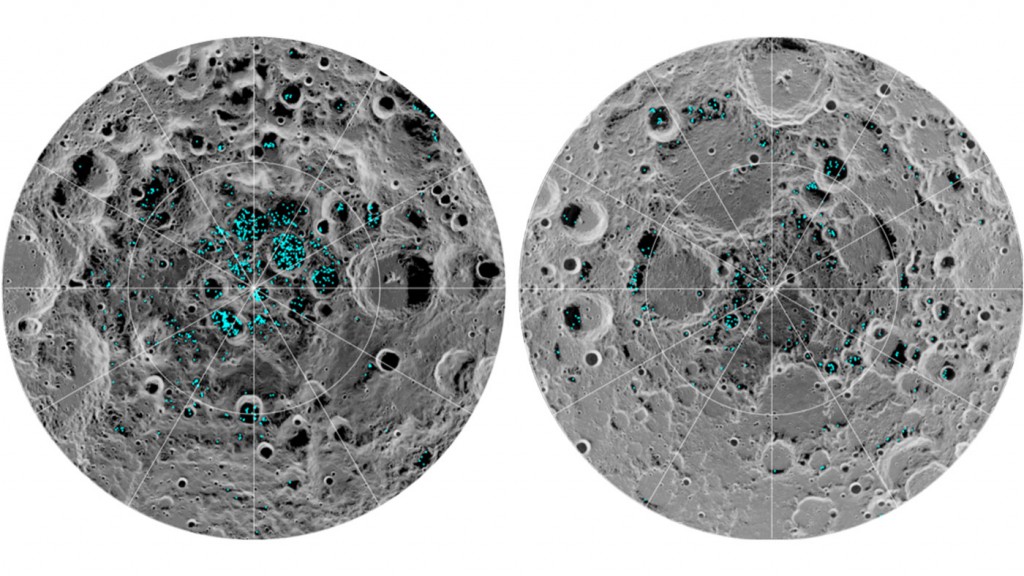 Here there be water! The maps show the distribution of surface ice at the Moon’s south (left) and north (right) poles. (Credit: NASA)

There’s water on the Moon.

Twenty years ago, evidence of frost-coated regions near the Moon’s poles was greeted with surprise and skepticism. Ten years ago, a NASA instrument aboard India’s Chandrayaan-1 space probe greatly boosted the case for water ice on the Moon. Then two weeks ago, a much deeper analysis of the Chandrayaan-1 data validated the surprise and ended the skepticism: Some permanently shadowed “cold-trap” craters near the lunar poles clearly do contain regions that are up to 30 percent water ice.

Lunar ice could be a precious resource for future explorers, a potential source of drinking water and oxygen as well as raw material for rocket fuel. The Moon’s poles are now beckoning targets for further exploration. There’s also a broader message to the discovery of ice on the Moon. Ice, frost, and snow are ubiquitous all across the solar system. Water ice is especially abundant, but every large world across the solar system seems to have frost of some form–even in the hottest and most unlikely places.

You could hardly pick a more unlikely place for ice than Mercury, the innermost planet. It orbits the Sun at just over 1/3rd Earth’s distance. It’s daytime temperature can hit 430 degrees Celsius (800 Fahrenheit). Yet during the 1990s, astronomers bouncing radar signals off of the planet noticed bright reflections from the polar regions. The signals were consistent with water ice tucked away in craters that, like the polar craters on the Moon, never get exposed to sunlight. As a result, temperatures there might never rise above -170 degrees C (-275 F), cold enough to keep water ice in stable cold storage. Recent data from NASA’s Messenger probe confirm that there’s ice on Mercury–quite a bit of it, in fact.

The origin of the ice remains a mystery, but the leading theories are that it could have been deposited by comet impacts, or that it could have formed locally from hydrogen atoms in the solar wind binding with oxygen atoms in surface rocks. Those are the likely mechanisms for the ice on the Moon as well. Soon we will know more. The European-Japanese BepiColombo probe, scheduled to launch later this year, will give Mercury a much closer look. And both NASA and the Chinese National Space Administration have expressed keen interest in assessing the potential watery resources at the lunar poles. 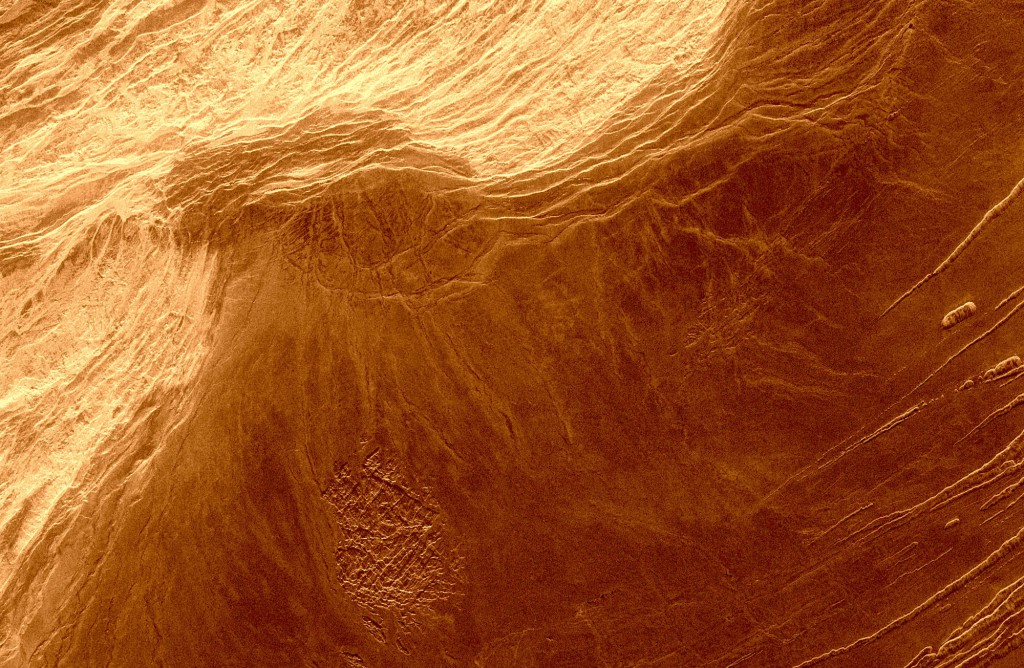 The high-altitude Maxwell Montes region of Venus appears bright in radar images, most likely because of a coating of heavy metal snow. (Credit: NASA/JPL)

There is one planet even less likely to have frost than Mercury. On Venus, the heat is even more intense (a steady 460 degrees C), and it is relentless; because of the thick atmosphere, there are no protected craters or other hiding spots. Water ice is impossible under those conditions, but other kinds of frost and snow can form under the extreme Venusian conditions. Here again the first clue came from radar images. Highlands on Venus appear unexpectedly shiny. Something is brightening up those regions–but what?

The leading theory is that high-altitude regions are dusted with metallic frost, most likely composed of lead sulfide and bismuth sulfide. These compounds might boil out of rocks at lower altitudes or, more plausibly, could be belched out by intermittent volcanic activity. Venus is so hot that even metallic compounds cannot condense close to the ground. They would freeze out only on high mountains. It’s only fitting that a hellish planet would be dusted with heavy metal snow.

Continuing outward from the Sun, there’s no doubt that water frost is abundant on planet #3, Earth. The fourth planet, Mars, also wears its ice prominently, although the planet’s famous polar caps contain frozen carbon dioxide (aka dry ice) in addition to frozen water. The exciting news from Mars is that some of its water appears not to be frozen solid. A huge underground lake of liquid water appears to exist in the south polar region of the planet.