The Peopling of the Americas: Evidence for Multiple Models

A new review of evidence for the peopling of the Americas suggests both coastal and interior routes, such as through this Alaskan landscape, were possible. (Credit: Ben A. Potter)

Exactly how and when the peopling of the Americas took place has long been one of the hottest debates in science. For every new paper that emerges with evidence of an interior or coastal route, it seems another team publishes contradictory conclusions. Authors of a new review of archaeological, geological and paleogenetic research have concluded that both of the two main models are reasonable — and that a couple fringe theories are most definitely not.

If you’re a regular reader of Dead Things, you’re familiar with the ongoing kerfuffle between advocates of the two leading theories about how humans arrived in the Americas, but let’s do a quick recap.

Advocates of the interior route believe people from northeastern Siberia traveled on foot, likely following large herds of game animals, eastward over the land bridge of Beringia into what’s now Alaska. Beringia, by the way, has been exposed multiple times over the past several million years, during various ice ages when sea levels dropped. It’s sometime during the end of the last Ice Age that humans began their move from Siberia into Beringia and eventually Alaska. The interior route has been the dominant model for decades.

Then we’ve got the coastal route, often called the Kelp Highway model, which has gained traction particularly in the last couple years. It suggests people from northeastern Siberia followed the coast by boat, including along sea ice at times, around the northern Pacific and all the way to the Americas, continuing down the coast potentially as far as modern-day Chile. The resource-rich waters, full of fish, shellfish, seals and kelp, plus birds overhead, would have sustained the explorers.

Both models agree on some crucial points, particularly that individuals from northeastern Siberia traveled eastward, one way or another, to populate the Americas. The genetic connection between ancient Siberian and First American populations has been well-established within the last half-decade thanks to successful sequencing of ancient DNA from both sides of the Pacific.

There’s also agreement that the travel took place sometime within the last 25,000 years. That’s when, looking at the genetic data, scientists see that the Siberian and First American populations become genetically isolated.

It’s important to emphasize, however, that based on this isolation alone, researchers can’t determine that travel to the Americas was occurring that early. It is very possible that the people directly ancestral to the First Americans were still in Siberia, or in Beringia, simply separated from other populations for millennia before heading east.

While the coastal and interior camps agree on the basic background, the devil, of course, is in the details.

Critics of the Beringia interior model cite recent geological and paleogenetic studies that suggest there was no way to travel by foot from Beringia into the interior of the Americas before roughly 13,500 years ago (give or take; different studies looked at different sites and different types of evidence, reaching slightly different date estimates). The Cordilleran and Laurentide ice sheets created an impassable environment for humans until that time, say anti-interiorists.

But a handful of archaeological sites in the Americas have been dated to be considerably older, including the Page-Ladson butchering site in Florida (about 14,500 years), the lower levels of the Gault site in Texas (at least 16,000 years) and Chile’s Monte Verde site (possibly 18,000 years). If humans arrived in the Americas from Siberia before an interior route opened, they must have come by boat, goes the argument.

That theory is all wet, counters the pro-interior route camp. The arguments against the coastal route have taken many flavors. Some of the more hardline critics claim artifacts from the earliest archaeological sites were either dated inaccurately or are products of natural erosion, not human hands. More moderate voices, however, suggest their pro-coastal, anti-interior peers have misinterpreted some important findings in recent papers.

Which brings us to a review of much of the most recent data from both camps, published today. The review looked at archaeological, paleogenetic and geological data published previously both for and against the interior and coastal routes.

The team’s conclusion: Simmer down, coasties and landlubbers, it’s possible you’re both right.

Speaking at a press conference Monday, review co-author Ben Potter, an anthropologist at the University of Alaska-Fairbanks, summed it up this way: “We can’t exclude either the coastal or interior route. Both could be used, actually; I suspect both probably were used. But again, that’s speculation…and we shouldn’t be as firm as some have been that we know the answers now.”

For example, Potter explained, the pro-coastal camp has interpreted dates in recent studies of roughly 12,600-13,100 years for flora and fauna along the proposed interior route as maximums — the earliest dates possible for conditions hospitable to humans. But the ages are just data points, and may not reflect when the interior route truly opened up to human migration. “The viability of the corridor could be even older; these are just the first actual dates that we have,” said Potter.

Meanwhile, back on the coast, a funny thing happens when an ice age ends: isostatic rebound.

When much of the planet’s water is frozen in ice sheets, sea levels tend to drop but, on a much more localized level, the sheer weight of glaciers can squash the land beneath and around them. Melt the glaciers and ta-da! The ground rebounds, springing up. The result: some coastlines from the Last Glacial Maximum (LGM) are actually above current sea levels. Thanks, isostatic rebound!

With better maps of where the LGM coastlines were, researchers have surveyed some areas that are now high and dry, looking for signs of human seafarers. All the sites found so far, noted Potter, have been at least 1,600 years younger than interior sites, and the style of the artifacts associated with these coastal sites appears to be derived from older material found in the interior.

Then there’s the lifestyle issue, noted Potter. All archaeological evidence from northeastern Siberia and Beringia suggests the people living there were hunting megafauna — bison, horse and mammoth — not megafish. There is no evidence of a maritime tradition in these populations, which are genetically closest to the people who did eventually make it to the Americas.

Of course, a hypothesis is just that, and based on evidence currently available.

Last November, for example, a separate team advocating for the Kelp Highway model noted that much of the evidence for these intrepid seafarers, from Asia all the way down the coast of the Americas, was likely in sites now underwater (isostatic rebound is, again, highly localized, and much of the coastline that would have provided pit stops on the Kelp Highway is indeed currently under the sea). Underwater archaeology projects could turn up new evidence that boosts — or torpedoes — the coastal route.

What’s needed to determine how and when the peopling of the Americas really happened is a multidisciplinary approach, said Potter and his colleagues. Foremost in that effort will be working with indigenous communities to collaborate on the sampling and sequencing of ancient DNA, an issue that has been marred in the past by cultural differences, perhaps most famously with the legal battles surrounding the nearly 9,000-year-old First American known as Kennewick Man. 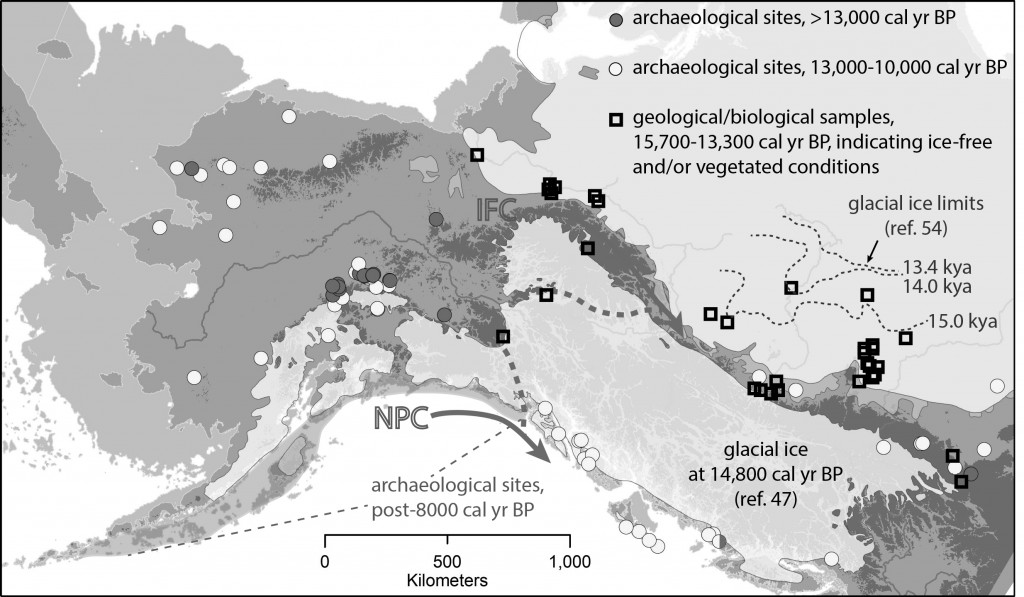 A close-up of both archaeological sites and locations for geological and paleogenetic samples, including lake bed sediments, ancient plants and other material that has helped researchers build a more complete picture of the peopling of the Americas. The most likely overland route, between the Laurentide and Cordilleran ice sheets, is on left. (Credit: Potter et al., Sci. Adv. 2018;4: eaat5473)

Perhaps the most important moment of Monday’s press conference was one free of data points. Reflecting on the current state of the debate and why many researchers, and the public, seem to want a single narrative — coastal or interior — despite a lack of clear evidence, Potter said: “We would rather be intellectually honest and say both hypotheses should be on the table, more research should be done on both.”

He added: “I think the issue of ‘I don’t know’ is for many people not a good answer. And so an answer that might be incomplete or conflicting could be preferred over an answer of ‘I don’t know.’ As scientists I think all three of us here are very happy with ‘I don’t know’ because it pushes us forward to address the questions with new data and new analyses.”

By the way, at Monday’s press conference, the authors acknowledged that Beringia and the Kelp Highway are not the only two models for the peopling of the Americas. A few others are bandied about, most typically in sketchy YouTube videos that are light on sourcing. There has been speculation, for example, that Oceanic populations sailed eastward across the South Pacific, reaching Rapa Nui and eventually South America, and then continued to travel back and forth.

“There’s absolutely no evidence for that, and lots of counter-evidence against that,” Potter said.

Then there is the Solutrean Hypothesis, which suggests that groups of European hunter-gatherers suddenly decided to become seafaring sorts, left France and Spain, and boated west, following the edge of the sea ice, to the Atlantic Seaboard of North America sometime during the last Ice Age. The idea was based on perceived similarities between the stone tools of the European Solutreans and the Clovis culture in the Americas.

“People maybe have a misunderstanding about how much support that (hypothesis) might actually have within the scientific community,” Potter said tactfully. “It’s been tested and refuted on a number of grounds.”

While the Solutrean Hypothesis has never been widely embraced in academic circles due to an absence of compelling evidence, one place the theory has found a home is with white supremacists (so it’s got that going for it/sarcasm). For a great explanation of the numerous problems with the Solutrean notion, check out this thoughtful commentary from one of the researchers involved in a recent documentary that reignited the issue.

The review by Potter and colleagues appears today in Science Advances.