How much damage can the brain take and still function normally? In a new paper, A Lesion-Proof Brain?, Argentinian researchers Adolfo M. García et al. describe the striking case of a woman who shows no apparent deficits despite widespread brain damage.

The patient, “CG”, is 44 years old and was previously healthy until a series of strokes lesioned large parts of her brain, as shown below.

García et al. say that the damage included “extensive compromise of the right fronto-temporo-parietal cortices, left Sylvian and striatal regions, and bilateral portions of the insula and the amygdala”.

Despite this, CG’s cognitive function was almost completely unaffected. She tested in the normal range on executive function, memory, and emotion recognition tasks. Her only deficit was an reduced sense of smell.

In terms of daily activities, CG is unimpaired, although she does have a tendency to be overly open:

She has intact motor skills: she routinely types on her computer, walks at least 1 h each morning, and goes swimming every week… her emotional repertoire seems uncompromised: during the interviews she exhibited normal basic and social emotions, and she provided clear examples of recent scenarios in which she predictably experienced joy, fear, frustration, exultation, and other feelings.

She is also capable of inferring other people’s beliefs and emotional states, as seen, for instance, in her detection of anxiousness when two of the present authors were readying themselves for a book presentation. Additionally, her interpersonal behavior is consistently adequate during interactions with the institution’s staff, her caregivers, and her children, except for a tendency to be overly open regarding her personal problems.

The researchers even visited CG’s house where, they say, her “resourcefulness as a host” provides “the most eloquent proof” of her intact function:

Her preparation of various beverages and snacks, handling of trays and cups, and coordination of the conversation attested to her capacity to efficiently fulfill multiple concurrent tasks even under the shifting demands of a complex, context-rich setting.

García et al. conclude that CG is a remarkable example of the resilience of the brain, and they compare her to other famous cases of individuals who lived normal lives despite major brain abnormalities. The authors admit that CG’s preservation of function is hard to explain and “defies most expectations and theories about neurocognition.”

CG’s lesions are widespread, but they are mostly confined to the right hemisphere, which is the non-dominant hemisphere (CG is right-handed). So her left hemisphere may have been able to compensate for the loss of the right – a well-known phenomenon.

The only areas which were damaged on both the left and the right side were parts of the insula and the amygdala. Both of these lesioned areas are believed to be linked to emotion, so it is surprising that CG’s emotional experience and ability to recognize emotions wasn’t affected. However, a closer look at the results reveals that CG scored well below average on three of the emotion recognition tasks, albeit this wasn’t statistically significant: 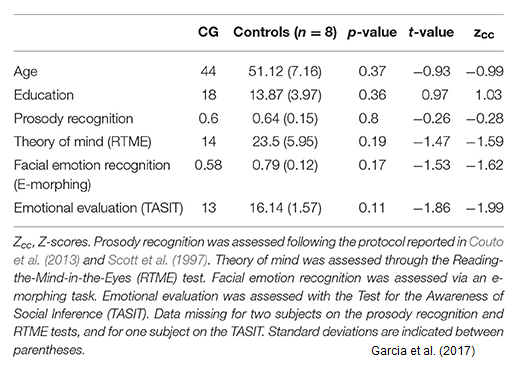