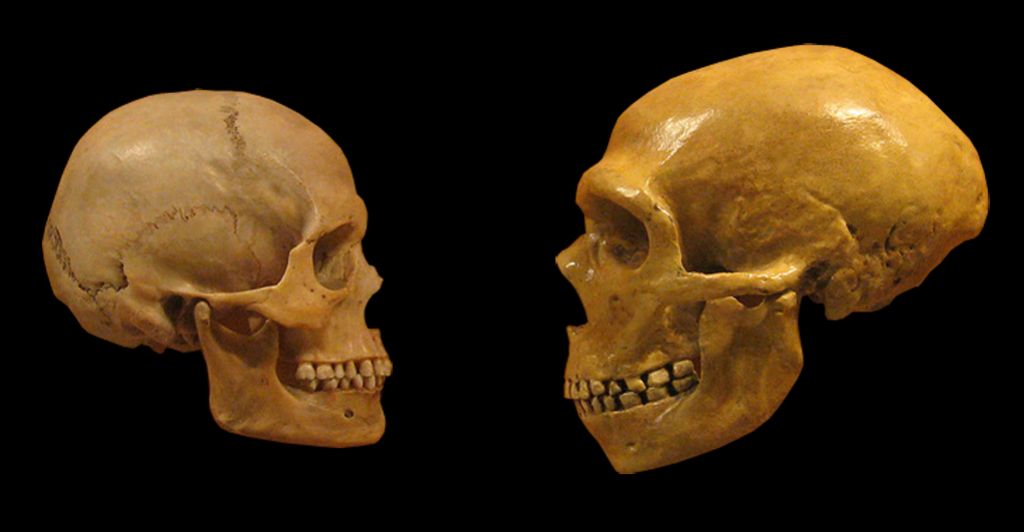 Being a generalist specialist, a unique niche, is the hallmark of our species, say researchers â€” and the reason Homo sapiens (left) are still around but other hominins, including Neanderthals (right), are not. (Credit: Wikimedia Commons)

Some animals are jacks of all trades, some masters of one. Homo sapiens, argues a provocative new commentary, are an evolutionary success story because our ancestors pulled off a unique feat: being masterly jacks of all trades. But is this ecological niche, the generalist specialist, the real reason our species is the last hominin standing?

When paleoanthropologists and archaeologists define what makes our species unique, they usually focus on our use of symbolism and language, as well as our skills in social networking (long before Facebook) and technological innovation. Those arguments for human exceptionalism have been challenged in recent years, however, as researchers have uncovered evidence that other members of the genus Homo, notably Neanderthals, were capable of similar cognitive processes, from artistic expression to producing fire at will.

But maybe, say two researchers, we got it wrong. What defines our species, and has allowed H. sapiens to survive and even thrive after all other hominins went extinct, is not about making better stone projectiles, or networking, or sprucing up the cave walls with a little ochre artwork. Weâ€™re the last hominins on Earth because weâ€™re really good at adapting to a huge range of environments, including the extreme.

Over The River And Through The Woods (And The Tundra, And The Desertâ€¦)

To make their case, researchers mapped out the likely ranges of archaic members of the genus Homo according to current fossil, paleoenviromental and archaeological evidence. Being a fan of the scientific method, I think itâ€™s worth noting here that this map almost certainly will change as new finds turn up. But for now, working with the best body of evidence weâ€™ve got, itâ€™s clear that early H. sapiens, once they left Africa, seemed to explode across the Old World, moving into territory previously occupied by one or at most two other hominin species.

A map of the estimated ranges of archaic members of the genus Homo, spanning the period H. sapiens emerged in Africa and dispersed across the rest of the Old World, roughly 60,000-300,000 years ago. (Credit: Roberts and Stewart, 2018. Defining the â€˜generalist specialistâ€™ niche for Pleistocene Homo sapiens. Nature Human Behaviour. 10.1038/s41562-018-0394-4)

What might not be immediately evident from the map is that early H. sapiens dispersal wasnâ€™t just about setting foot on a new continent; it was also about moving into new and often extremely challenging environments, from deserts to arctic climes, from treeless, high-altitude plateaus to dense tropical rainforests.

To be clear, there is good evidence that other hominins called extreme environments home. Denisovans appear to have adapted to high-altitude life in Central Asia, for example, while diminutive H. floresiensis was at home in equatorial island rainforests. Itâ€™s been argued, heatedly (no pun intended), that Neanderthals were high-latitude specialists. But only H. sapiens turn up in all of those environments.

Itâ€™s the â€œunique ecological plasticityâ€� of our species thatâ€™s our defining trait, argue the researchers, and itâ€™s what gave us a leg up on surviving, whether moving into new territories or adapting to changing climate conditions. While this conclusion may seem obvious to us now, itâ€™s only been possible to reach it thanks to the flood of new evidence thatâ€™s revised the timeline of human evolution and dispersal.

The new research has shown our species evolved earlier than once thought (our start date is now at least 300,000 years ago) and spread beyond Africa sooner than expected: Consider, for example, the first H. sapiens fossil found in the Arabian Peninsula â€” once thought inhospitable to early humans â€” and described earlier this year, or a H. sapiens partial jaw from Israel thatâ€™s 177,000-194,000 years old.

The key to proving their hypothesis is correct â€” and to understanding how this ecological plasticity arose in our species â€” will be acquiring not just more evidence of a H. sapiens presence at different sites, but also strong paleoenviromental data, particularly in Africa where the earliest H. sapiens lived.

In the meantime, the researchers have coined a novel niche for the intrepid early H. sapiens: the generalist specialist. The team looked at the ecological niche profiles of specialists, such as pandas, and generalists, like the trash panda (aka the raccoon). They concluded that H. sapiensâ€™ unique generalist specialist niche allowed early members of our species to adapt to, and specialize in, living in wildly different environments. 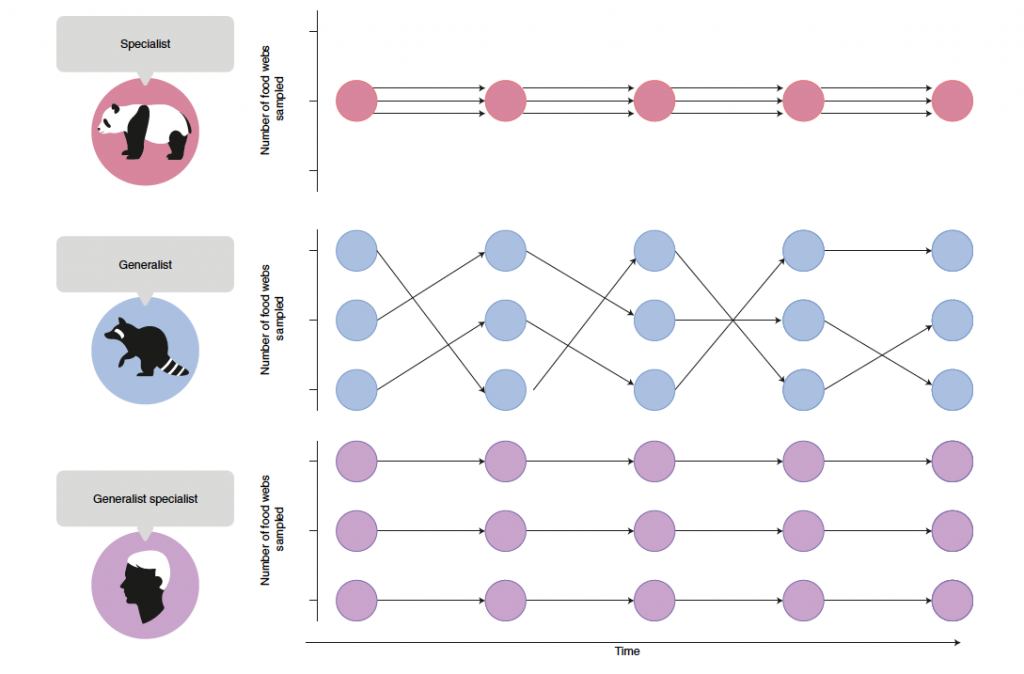 Pandas are considered specialists because all individuals utilize a single food web. Raccoons, on the other hand (paw?), are generalists adept at exploiting whatever food web they can find, as anyone who has left an unsecured trash can out at night probably knows. Our species has often been considered a generalist, but the authors of todayâ€™s commentary propose a new ecological niche for us: the generalist specialist, with different populations capable of adapting to and specializing in a wide range of environments and resources. (Credit: Roberts and Stewart, 2018)

While occupying the unique niche of generalist specialist will no doubt appeal to fans of H. sapiens exceptionalism, itâ€™s unclear that it provides what the researchers describe as a â€œframework for discussingâ€¦how our species became the last surviving hominin on the planet.â€� Specialists tend to face extinction, for example, only if their specialized ecological niche is wiped out â€” or they are out-competed by an invasive species. Ahem.