The Five Brightest Planets Align in the Night Sky 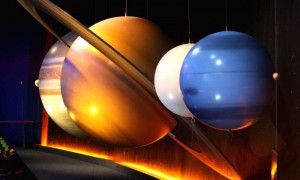 This month, the five brightest planets in our solar system align and be visible in the night sky. (Credit: Derek Bruff/flickr, CC BY-NC)

For the second time this year, the five brightest planets in our solar system — Mercury, Venus, Jupiter, Saturn, and Mars — will be visible in the night sky at the same time.

The planets will form a line that rises up from the horizon in the western sky and it will be easiest to see after sunset this Thursday, October 18. However, all month these planets will be visible in the same general areas of the sky.

Mercury and Venus will be most visible west and closer to the horizon, while Saturn will be higher up in the sky and northwest, Mars will be visible even higher. The night of October 18, Venus and Mercury will be side-by-side. Because Mercury is the faintest and hardest to see of these planets, having ultra-bright Venus by its side will make Mercury much easier to see.

Later in the month, on October 24, you might also be able to see Uranus and Neptune in the night sky — they just might be a little more difficult to spot.

This fantastic sight doesn’t always come around so often. While this is the second time the planets have been visible like this in 2018, and they were also visible twice in 2016, before then it had been a decade since the five brightest planets were visible together in the night sky like this.

The next time the five brightest planets align in the night sky in this way will be in July 2020, but instead of being so close together, as they’ll appear this month, they will be stretched across the sky and possibly tougher to see.