The first true-color images of Saturn taken during Cassini&#039;s close encounter are coming in — and they&#039;re beautiful! 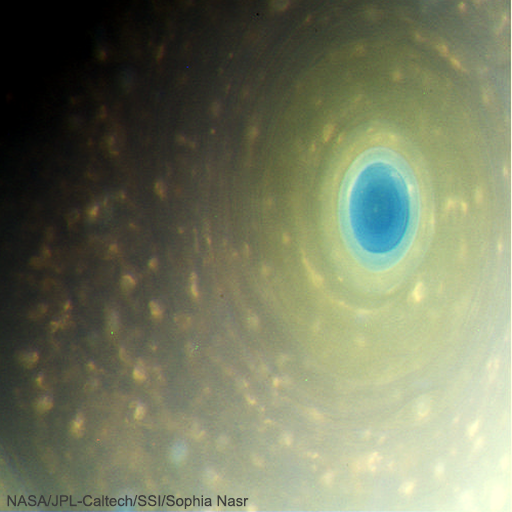 A processed, true-color image of Saturn’s polar vortex based on photos taken by Cassini on April 26, 2017 during the spacecraft’s first dive between the planet and its rings. (Source: NASA/JPL-Caltech/SSI/Sophia Nasr)

We’ve already been treated to spectacular black and white closeup images of Saturn, beamed home to Earth by the Cassini spacecraft after it dove between the planet and its rings. Now, we’re getting to see what things look like in true color.

Among the first of these images is the one above, processed by Sophia Nasr, an astro-particle physicist working on dark matter. She will begin her PhD studies in physics at UC Irvine in September 2017. (For her full bio, see the end of this post.) I first spotted Nasr’s image on Twitter, where she may be posting more. You can find her here: https://twitter.com/Pharaoness

SEE ALSO: Cassini shoots through the gap between Saturn and its rings, returning the closest views ever of the planet

That striking, sky-blue feature is the eye of a persistent hurricane at Saturn’s north pole. The feature is 1,200 miles across, about 20 times larger than the average hurricane eye on Earth. And clouds are swirling around it as fast as 330 miles per hour.

The striking cerulean color is not at all false. It comes from scattering of sunlight, the same phenomenon that produces a blue sky here on Earth.

To produce the image, Nasr used Photoshop to combine three photographs taken using blue, green and red filters. With a little additional tweaking of contrast and other factors, Nasr produced something akin to what the scene would look like to our eyes if we were hitching a ride on Cassini.

Just as an aside, I actually dreamed last night that I was doing just that. It was quite the wild ride (considering that we were moving at 77,000 miles per hour — Cassini’s actual speed as it zoomed between Saturn and its innermost ring). But in my dream, the eye was blood red, probably because I had seen false-color images of it before (shot in near-infrared wavelengths). So when I woke up and found Nasr’s image on Twitter, I was amazed.

Here’s an animation of the images Nasr used — red, green, blue — and concluding with the natural color result:

Each filter tends to bring out different features in the clouds and gas swirling around the eye. To learn how to do this kind of processing in Photoshop, see this tutorial at the Planetary Society.

Sophia Nasr isn’t the only person to produce a true-color view of the hurricane eye. Here’s another one, created by Jason Major, a graphic designer and space buff:

The hurricane eye on Saturn is part of a much bigger feature, called the Hexagon.

This false color animation is also from the Cassini spacecraft. When it was first produced by NASA in 2013, it was the highest-resolution view of the feature up until that point. You can see the eye of the storm swirling at the center.

And here’s a broader view: 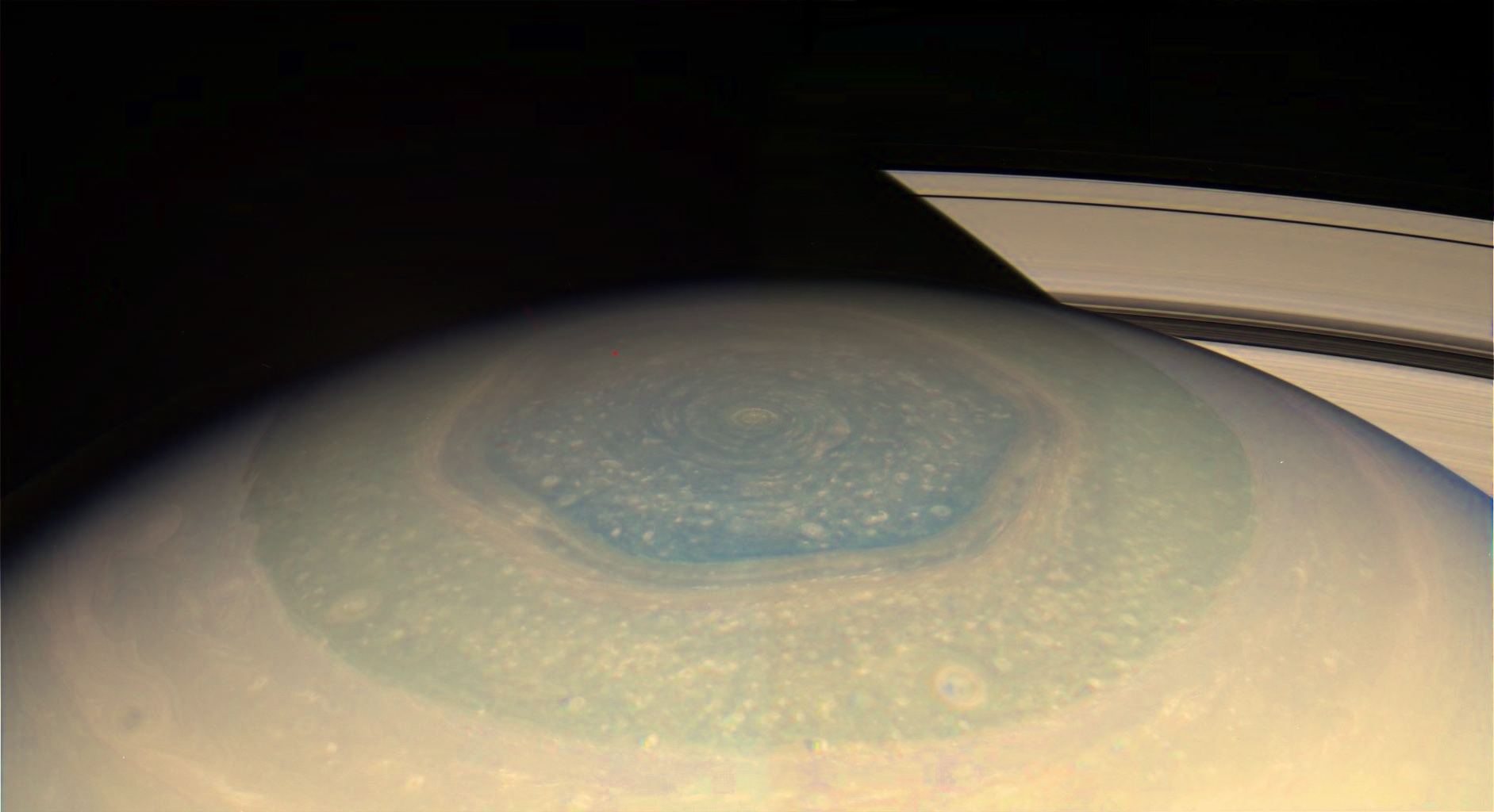 The Hexagon is produced by a six-sided jet stream pattern at Saturn’s north pole. It has been observed ever since the Voyager 1 and 2 spacecraft passed by in 1980 and 1981. For a detailed explanation of what sustains it, see this post by Emily Lakdawalla at the Planetary Society (who also did the Photoshop tutorial).

In coming days I’m sure we’ll be treated to yet more beautiful, color imagery acquired by Cassini during its daring, swooping dive. And remember this is just the first of 22 dives, part of what NASA is calling the “Grand Finale.”

This is the final chapter in Cassini’s epic journey. The spacecraft will loop around Saturn approximately once per week, plunging 22 times between the rings and the planet. And then on September 15, 2017, the spacecraft is scheduled to dive into Saturn’s atmosphere, putting an end to the mission.

To conclude, here’s that full bio Sophia Nasr sent me:

Sophia is an astro-particle physicist who researches dark matter, and will begin her PhD studies in physics at UC Irvine in September 2017. While astrophysics, particle physics, and cosmology are her passions, she also revels in planetary science and space missions that uncover mysteries of the planets in our solar system. Sophia is heavily involved in scientific outreach, using her social media reach to not only help people learn about science, but learn to love it.

I can say that I love it even more after seeing her imagery! And I’m looking forward to more.