The Fake “War Between Neuroscience and Psychiatry”

Neuroscientists have launched an assault on the American Psychiatric Association headquarters and are engaged in bitter, boardroom-to-boardroom fighting. Psychiatrists have captured the leader of a militant pro-brain faction. A ceasefire, brokered by the American Association for the Advancement of Science, is due to come into effect at midnight.

Yes, indeed. A blog post by Daniel Barron in Scientific American yesterday claimed that there is a War between Neuroscience and Psychiatry

Here’s how the piece starts:

Earlier this month, JAMA Psychiatry published a land-breaking editorial. A group of psychiatrists led by David Ross described how and why post-traumatic stress disorder (PTSD) should be clinically evaluated from a neuroscience framework. The fact that this editorial was published in one of psychiatry’s leading journals is no small feat.

The appearance of pro-neuroscience paper in JAMA Psychiatry is, apparently, a notable achievement because psychiatry “houses a large and powerful contingency that argues neuroscience has little clinical relevance.”

But that’s not really true. Modern psychiatry is very closely integrated with neuroscience.

The the paper Barron linked to, by Ross et al. is far from being the first incursion of neuroscience into JAMA Psychiatry. A full 16% of all papers published in that journal mention ‘brain’ in their title or abstract, which is higher than the proportion that mention such typical psychiatry terms as “mental“, “diagnosis“, and “medication(s)“.

In fact if you Google JAMA Psychiatry, their tag-line is “The Science of Mental Health and The Brain”. 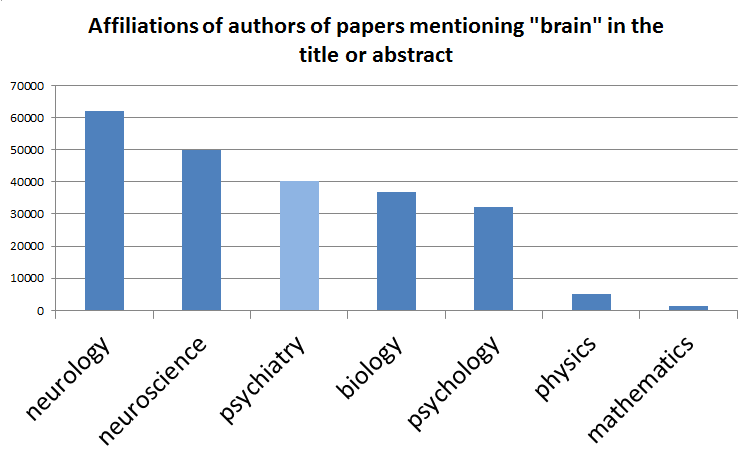 But when Barron complains about psychiatrists who think that “neuroscience has little clinical relevance”, I don’t think he’s talking about the small minority who reject the use of psychiatric drugs. Rather, I think he’s referring, rather unfairly, to psychiatrists who believe that mental illnesses are to some extent brain disorders, but who don’t think neuroscience has succeeded in allowing us to understand these disorders, yet.

Barron says that understanding is here. He takes the example of PTSD and talks approvingly about “key neuroscience themes” such as “fear conditioning, dysregulated circuits, memory reconsolidation, and epigenetic and genetic considerations.” Studying these themes, he says, and adopting “a mechanistic approach” allows psychiatrists to “trace the specific causes of PTSD to specific treatments that can target those causes.”

For example, “patients with PTSD have an overactive sympathetic nervous system [due to] overproduction of adrenaline” and this should “guides the clinician to prescribe propranolol and prazosin. These medications block aspects of the adrenergic system, thus targeting specific mechanisms that alleviate PTSD symptoms.”

Which is all lovely, neat and scientific. However, it’s naive to think that we understand the brain well enough for it to work.

The big discoveries in psychiatric medications were driven by serendipity, not through mechanism-based research. Someone noticed that an existing drug had effects that would be useful for psychiatry. The first antidepressant was invented as an antibiotic. The first antipsychotic was designed as a sedative, and so on.

It may be that propranolol and prazosin do help to treat PTSD, but the proof is in the pudding: we need randomized controlled trials to tell us how effective they are. We can’t assume that they will work, based on what we think we know about the mechanisms of PTSD. There might be a mechanism we’ve misunderstood, or one that we’ve missed.