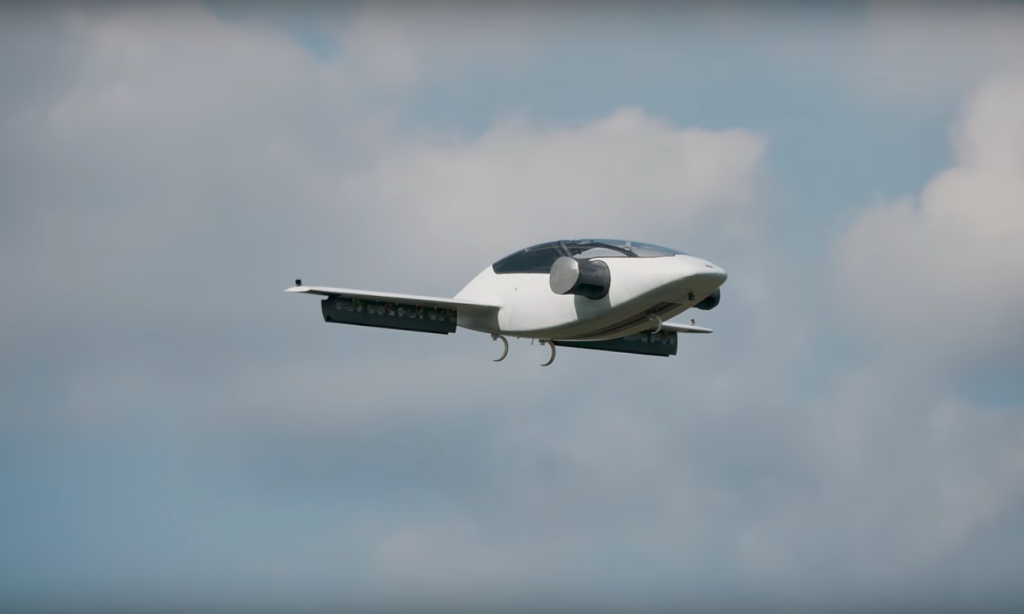 A prototype of the Lilium Jet takes off on a vertical takeoff and landing test flight. Credit: Lilium

The old science fiction fantasy of a flying car that both drives on the ground and flies in the air is unlikely to revolutionize daily commutes. Instead, Silicon Valley tech entrepreneurs and aerospace companies dream of electric-powered aircraft that can take off vertically like helicopters but have the flight efficiency of airplanes. The German startup Lilium took a very public step forward in that direction by demonstrating the first electric-powered jet capable of vertical takeoff and landing last week.

The Lilium Jet prototype that made its maiden debut resembles a flattened pod with stubby thrusters in front and a longer wing with engines in back. The final design concept shows two wings hold a combined 36 electric turbofan engines that can tilt to provide both vertical lifting thrust and horizontal thrust for forward flight. Such electric engines powered by lithium-ion batteries could enable a quieter breed of aircraft that someday cut travel times for ride-hailing commuters from hours to minutes in cities such as San Francisco or New York. On its website, Lilium promises an air taxi that could eventually carry up to five people at speeds of 190 miles per hour: about the same speed as a Formula One racing car. And it’s promising that passengers could begin booking the Lilium Jet as part of an air taxi service by 2025.

“From a technology point of view, there is not a challenge that cannot be solved,” says Patrick Nathen, a cofounder and head of calculation and design for Lilium. “The biggest challenge right now is to build the company as fast as possible in order to catch that timeline.”

Nathen and his cofounders met just three and a half years ago. But within that short time, they put together a small team and began proving their dream of an electric jet capable of vertical takeoff and landing (VTOL). Lilium began with seed funding from a tech incubator under the European Space Agency, but has since attracted financial backing from private investors and venture capital firms.

Getting Lilium off the ground probably would not have been possible just five years ago, Nathen says. But the team took full advantage of the recent technological changes that have lowered the price on both materials—such as electric circuits and motors—and manufacturing processes such as 3D printing. Lower costs enabled Lilium to quickly and cheaply begin assembling prototypes to prove that their computer simulations could really deliver on the idea of an electric VTOL jet.

Of course, Lilium is not alone in the race to rule the air taxi services of the future. More than a dozen startups worldwide have been developing some version of an air taxi vehicle, including the Silicon Valley startups Zee.Aero and Kitty Hawk that both have backing from Google cofounder Larry Page. Last week, Lilium joined many additional startups and aerospace giants alike in attending the Uber Elevate Summit hosted by the ride-hailing giant in Dallas, Texas. At the start of the event, Uber announced it had enlisted partners to help demonstrate the first flying taxi services in the cities of Dallas and Dubai by 2020.

Still, Lilium seems confident that its electric VTOL jet can win out over the competition. Nathen pointed to the Lilium Jet’s design as being fairly seamless in moving from the vertical takeoff phase into the forward flight phase. The vertical takeoff phase consumes the most power because the aircraft depends entirely upon the engines to produce downward thrust and lift during that stage. But once a VTOL aircraft transitions into forward flight, it achieves a “very efficient flight state” that requires much less thrust and power from the electric propulsion system. 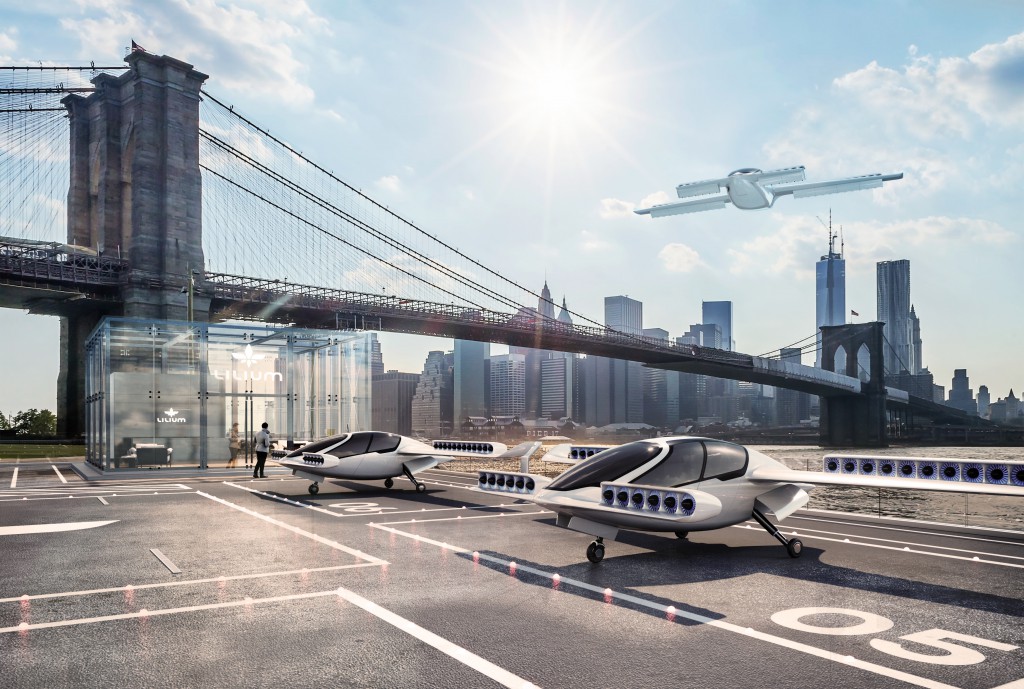 A concept illustration of Lilium Jets acting as air taxis in the future. Credit: Lilium

Other competitors are likely aiming to achieve a similarly smooth transition into the more efficient flight phase. But Nathen says that the Lilium Jet has an edge because its design gives the pilot full maneuverability and control during the tricky transition phase from vertical takeoff to forward flight.

“With this propulsion system and also the flaps that are always sucking air over the airfoil, we always have attached flow over the wing, and with the moving flaps we are able to steer the body as well,” Nathen says. “This is the main difference compared with the other VTOL concepts that are currently being developed all over the world.”

Next Steps for Lilium

The vertical takeoff and landing test performed remotely without a pilot last week was just the beginning for Lilium. The German startup still needs to test its two-seater prototype in the other flight phases beyond vertical takeoff by going through the transition phase and finally achieving forward flight. A first manned flight test with a fully-functioning jet is planned for 2019. The Munich-based startup also has yet to build and test the larger five-person version of the electric VTOL jet that it envisions as a safe, cost-effective and speedy form of travel for future commuters.

Many companies and experts believe that the future belongs to fully-automated air taxis flying on autopilot. Nathen acknowledged that seems to be the direction the industry is moving toward. But he added that Lilium plans to have human pilots operating the Lilium Jets with very simplified manual controls. The startup aims to replace most of the typical cockpit instruments found in modern aircraft with a joystick-steered control system that can give pilots “an extremely easy way to fly this aircraft.”

It sounds like a lot to do before Lilium can deliver on its 2025 promise. But Nathen says he and his cofounders calculated the timeline as a “realistic but conservative” estimate based on their experience with the development process. Lilium has also already begun talking with the European regulators who would need to sign off before the Lilium Jet—or any competitor—takes to the skies.