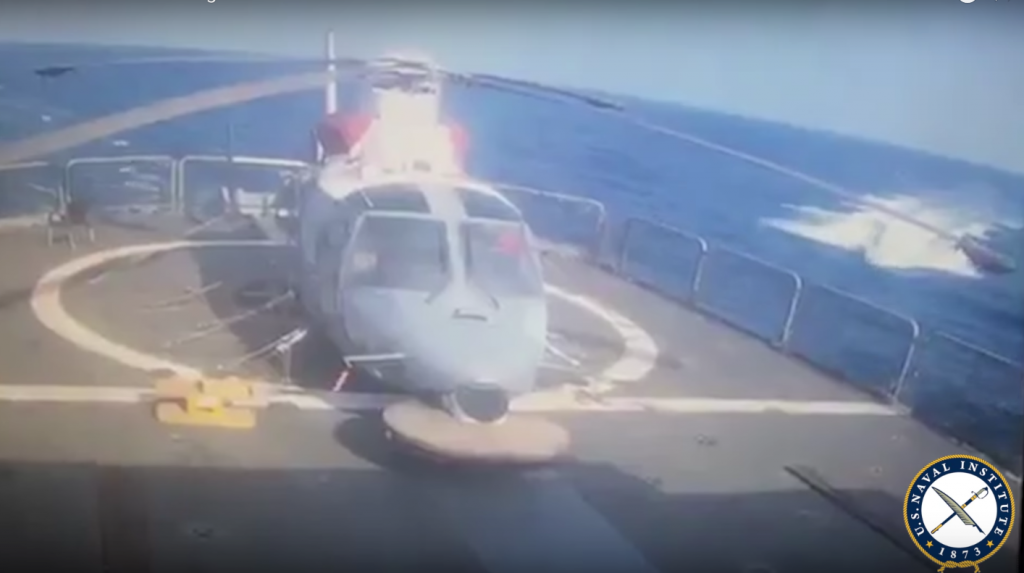 A video screenshot shows a robot boat packed with explosives just moments before it strikes a Saudi missile frigate and explodes on Jan. 30, 2017. Credit: USNI News

A suicide boat attack that killed two sailors aboard a Saudi warship was apparently carried out by an unmanned, remotely-controlled boat. The U.S. Navy says the incident likely represents the first ever use of a suicide robot boat as a weapon on the high seas.

Suicide boat bombings carried out by human crews willing to die in the attacks are nothing new. Such an attack killed 17 sailors and wounded 39 others aboard the U.S.S. Cole, a U.S. Navy destroyer refueling in the port of Aden, Yemen on Oct. 20, 2000. But the deadly debut of the suicide robot boat as first reported by Defense News shows how fairly cheap weapons can be deployed against much more advanced warships without even requiring a human “martyr” to pilot the suicide boat.

This first known use of a suicide robot boat was carried out by Houthi rebels fighting against Yemeni government forces in a brutal civil war that has lasted since early 2015. The rebels targeted a Saudi missile frigate called Al Madinah while it was on patrol off the coast of Yemen. Saudi Arabia is leading a Middle Eastern coalition of Sunni Arab countries that has been supporting the government with both airstrikes and a naval blockade aimed at putting down the Houthi insurgency.

Video taken from the deck of the Saudi missile frigate shows the robot boat careening directly into the rear of the warship and exploding near its helicopter pad. That video was first obtained by the U.S. Naval Institute (USNI) News.

The attack was first reported in the Saudi Press Agency on Jan. 30, 2017. But the assessment of the attack being carried out by a suicide robot boat did not emerge until a Feb. 19 Defense News interview with Vice Adm. Kevin Donegan, commander of the Bahrain-based U.S. Fifth Fleet and head of U.S. Naval Forces Central Command.

Donegan pointed to Iran as a likely culprit in helping the Houthi rebels obtain or develop the necessary technologies for the suicide robot boat. He also expressed concern about the possible growing threat that swarms of suicide robot boats could pose to commercial shipping passing through the Red Sea, especially given how the technology found its way into the hands of a “non-state actor” such as the Houthis.

So how can a suicide robot boat be stopped? The U.S. Navy has been testing a number of weapons such as lasers to counter the threat that small boats pose to its expensive warships. But one of the Navy’s best possible counters to suicide robot boats may be to intercept such attacks with a swarm of U.S. Navy robot boats. The U.S. Office of Naval Research has been testing such robot boat swarm technology as a way of screening and protecting larger warships. (The U.S. Navy has its own history of exper

The development of robot boats as suicide bombers should come as no surprise given the spread of militarized robot technologies on land and in the air. Islamic State has gained attention recently for converting ordinary commercial drones into flying bombs or even flying bombers. Even the U.S. Navy experimented with its own suicide drones during World War II and the Korean War.