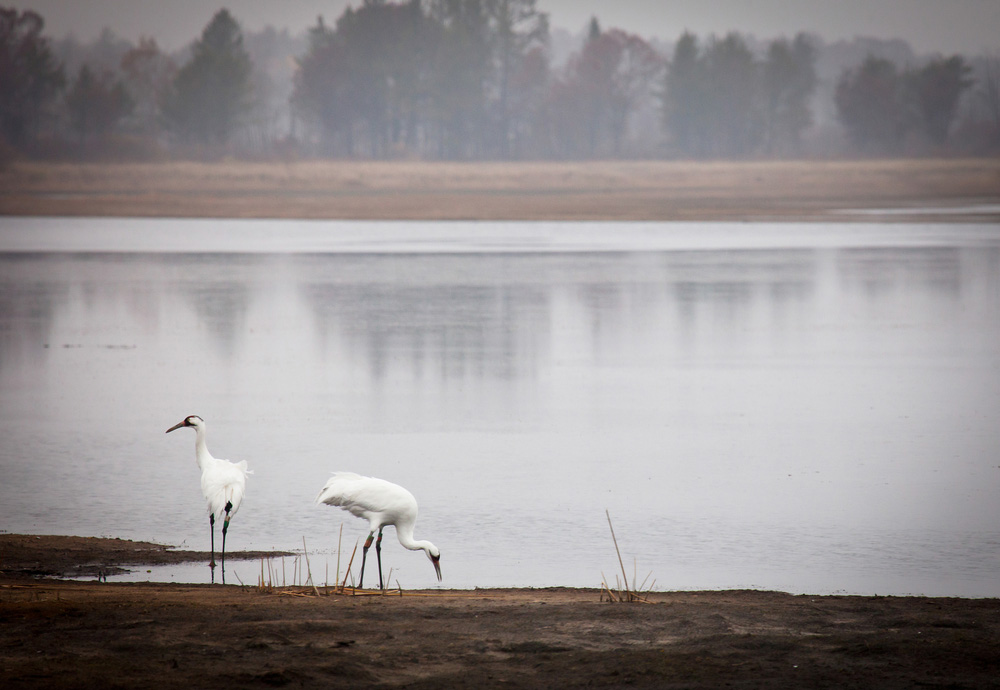 A pair of whooping cranes look for food at Necedah National Wildlife Refuge in Wisconsin. A new study shows that migrating birds could suffer as climate change shift the onset of spring. (Credit: critterbiz/shutterstock)

Thanks to climate change, spring now comes earlier. But how much sooner the season arrives varies across the U.S. That’s according to a new study published Wednesday in the journal PLOS ONE that assessed the first appearance of leaves and flowers in nearly 500 U.S. National Wildlife Refuges over more than 100 years.

Hundreds of migratory birds travel thousands of miles across the U.S. each year. Many birds move from Central America, where they spend the winter, to locations across the northern U.S. to breed and raise young. The success of their international travels depends on good timing. The birds must coordinate their arrivals with spring’s appearance to ensure enough food is available to eat at their destination.

Though some birds have adjusted when they migrate, it’s still unclear whether they’ll be able to keep up with changes in food availability across such vast distances over the long-term.

Eric Waller, a physical scientist at the Western Geographic Science Center of the United States Geological Survey in Menlo Park, California, who led the new research, wanted to know how the timing of the beginning of spring has changed over the last century and whether differences might affect migratory birds.

So, the researchers mapped data of first leaf and first bloom appearances, indices that mark the onset of spring, across 496 national wildlife refuges in the U.S. stretching back to the beginning of the last century. They found that spring now starts earlier — with leaves budding up to 3 days sooner each decade — in 76 percent of the wildlife refuges.

When the team compared the change of spring’s arrival to North American bird flyway paths, they found spring arrived a quarter of a day earlier each decade along the Central migratory route, but nearly half a day earlier each decade along the Atlantic path. Spring also came sooner at more northern latitudes, which could impact when food is available for birds along their migratory paths. So researchers assessed how a premature spring might affect blue-winged warblers and whooping cranes, two bird species that use distinct habitats and migratory pathways.

“When considering breeding and non-breeding habitats of migratory birds — such as the whooping crane and blue-winged warbler — continental-scale shifts in the onset of spring have species- and flyway-specific ramifications,” Waller said in a statement.

Waller and colleagues found spring came nearly half a day earlier each decade at both birds’ breeding sites, but not where they spent their winters. That means they may arrive at breeding sites after insects and other grub are at their most abundant.