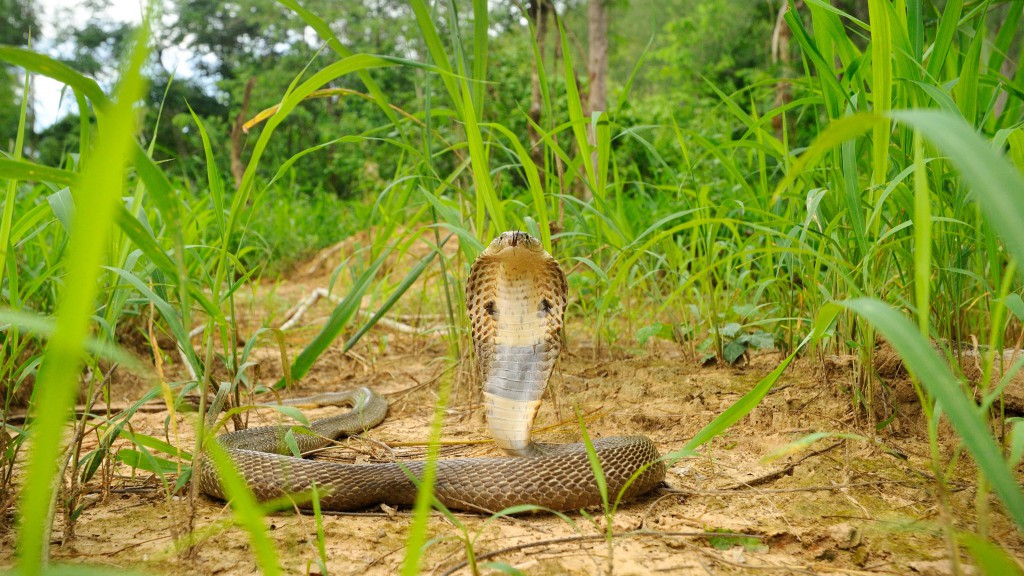 Vishal Santra got more than he bargained for when he peered into a chicken coop in the Hooghly District of West Bengal, India in 2004. He was helping the local community with dangerous snake removals when he was called upon to wrangle an unwelcome guest in a fowl pen: a monocled cobra, Naja kaouthia. Monocled cobras, which can reach lengths of about 5 feet, are highly venomous animals, so Santra knew to avoid a quick strike. But the animal didn’t lunge—instead, from over a foot away, the serpent spat at Santra’s face, getting a small amount of venom into his eye.

Santra, a wildlife consultant for Simultala Conservationists, might have been more prepared for the defensive shot if the snake were one of the monocled cobra’s close cousins. There are fourteen species of spitting cobras in the genus Naja—seven from Africa, and seven from Asia. But Naja kaouthia is not considered one of them, so the spitting was unexpected. There had been rumors, of course, of the monocled cobra’s spitting abilities—some have even referred to the them as “quasi-spitters“—but such claims remained scattered and largely unconfirmed until Santra’s encounter. Eager to replicate the behavior, Santra taunted the snake with a clay pot—and the snake spit again.

In a new paper for Herpetological Review, Santra and his colleague, Wolfgang Wüster from Bangor University, not only tell the story of this initial spitting individual, they also document other known cases and the mechanics of monocled cobra spitting. The pair and their colleagues have witnessed spitting in approximately 120 to 130 adult monocled cobras from the Hooghly, Burdwan, and Nadia districts—the overwhelming majority of the monocled cobras they’ve caught there—as well as in animals from the Bishnupur and Imphal West districts in Manipur State and the State of Arunachal Pradesh in northeastern India.

Spitting cobras stand out from many of their relatives in the family Elapidae because they possess venoms that are highly cytotoxic—which destroy tissues—rather than the paralysis-inducing neurotoxic venoms found in other elapids. (Intriguingly, a recent analysis suggested that the change in toxicity facilitated the adaptation of spitting, rather than the other way around.) Some spitting cobras can launch their venoms more than six feet, and aim for sensitive areas like eyeballs.

Figure 1 from Santra and Wüster 2017. A) Spitting in Naja kaouthia (Nalikul, Hooghly District, West Bengal, still from slow-motion video). B) Full body photo of snake shown in A. C) Spitting in N. mossambica (Hoedspruit, South Africa). Note differences in the exit angle of the venom from the fang.

But feats like that require special adaptations to the fangs and head, which monocled cobras do not possess. Their spitting ability is much more limited. When taunted, the cobras Santra and Wüster filmed all spat more downward than forward, with the venom exiting the fangs at a more acute angle than seen in African spitting species.

Unluckily for Santra, the monocled cobra that spit at him, while lacking in distance, had impeccable aim. A small amount of the venom that splashed on his face got in Santra’s eye. The pain was excruciating and immediate, and Santra was unable to open the eye for nearly half a day afterwards. Even the next day, his eye continued to weep.

Intriguingly, while Santra and Wüster have shown that monocled cobras from eastern India readily spit when threatened, populations in places like Thailand do not seem to. Morphologically, there’s no reason they can’t—the snakes’ fangs don’t appear to be any different across the animal’s range. One possibility is that there is hidden diversity in the presumed species, and that N. kaouthia is actually multiple cryptic species, one or more of which do not spit. Further research on this species from multiple locations is needed to be sure.

One thing is certain: anyone who works with these animals should be on guard that spitting is possible—something no one wants to find out as Santra did: the hard way.