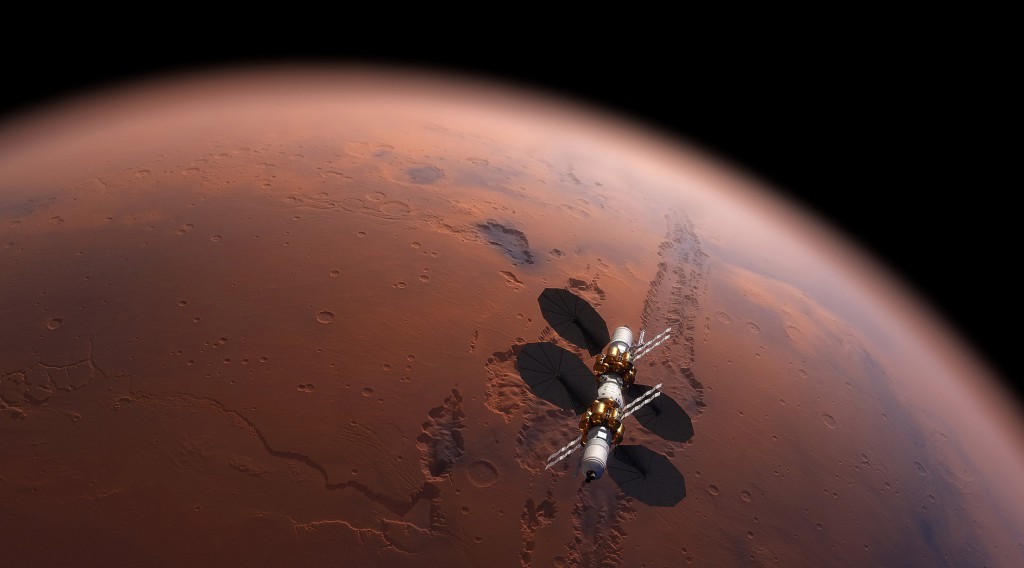 Lockheed Martinâ€™s Mars Base Camp is part of a vision to bring astronauts to the Red Planet. But to enjoy living there longterm, many scientists have long dreamed of altering the planetâ€™s atmosphere. (Credit: Lockheed Martin)

Mars might not have the right ingredients to terraform into our planetary home away from home â€“ even with the recent discovery of liquid water buried near its south pole.

Research published Monday in Nature Astronomy puts a kibosh on the idea of terraforming Mars. At the heart of the study is carbon dioxide. Carbon dioxide, a greenhouse gas, is abundant on Mars â€” its thin atmosphere is made of the stuff, and the white stuff we often see on the surface is dry ice, not snow. CO2 is even trapped in the rocks and soil.

That abundance has long fueled visions of a fantasy future where all that trapped carbon dioxide is released, creating a thicker atmosphere that warms the planet. SpaceX founder Elon Musk has even proposed nuking Mars to make this happen.

But in this new study, veteran Mars expert Bruce Jakosky of the University of Colorado Boulder and Christopher S. Edwards of Northern Arizona University, surveyed how much carbon dioxide is available for terraforming the Red Planet. They combined Martian CO2 observations from various missions â€” NASAâ€™s MAVEN atmospheric probe, the European Space Agencyâ€™s Mars Express orbiter, as well as NASAâ€™s Odyssey and the Mars Reconnaissance Orbiter. The results throw shade on the dreams of futurists.

The paper looks at two approaches that have been discussed. In the first, humans simply raise Marsâ€™ atmospheric pressure until space colonists can walk around with a breathing apparatus instead of the full astronaut pressure suit used in spacewalks. The other scenario looks at creating an atmosphere that allows liquid water on the surface and roughly breathable air.

Either scenario needs plenty of CO2. And â€¦ thereâ€™s just not enough. The polar caps are actually quite shallow deposits of carbon dioxide, and even exhausting all of Marsâ€™ existing CO2 resources still creates just 15 millibars of the atmospheric pressure â€” on Earth, roughly 1,000 millibars is considered average pressure at sea level. Even vaporizing Marsâ€™ carbon rich sedimentary rocks, laid down when the Red Planet was watery, would only release about 12 millibars. None of the scenarios the scientists looked at could make much of a difference, even considering unlikely conditions like creating an artificial magnetic field.

Mars is a cold, nearly airless desert, and it seems likely to stay that way.

This may not affect plans for a pressurized Mars base, but it makes the idea of actually colonizing Mars a whole lot less appealing. And while some future ideas like redirecting comets could bring more gases and water to Mars, those are way, way beyond our current means.