Sobering Finds in Most Comprehensive Study Ever on Antarctic Ice Loss 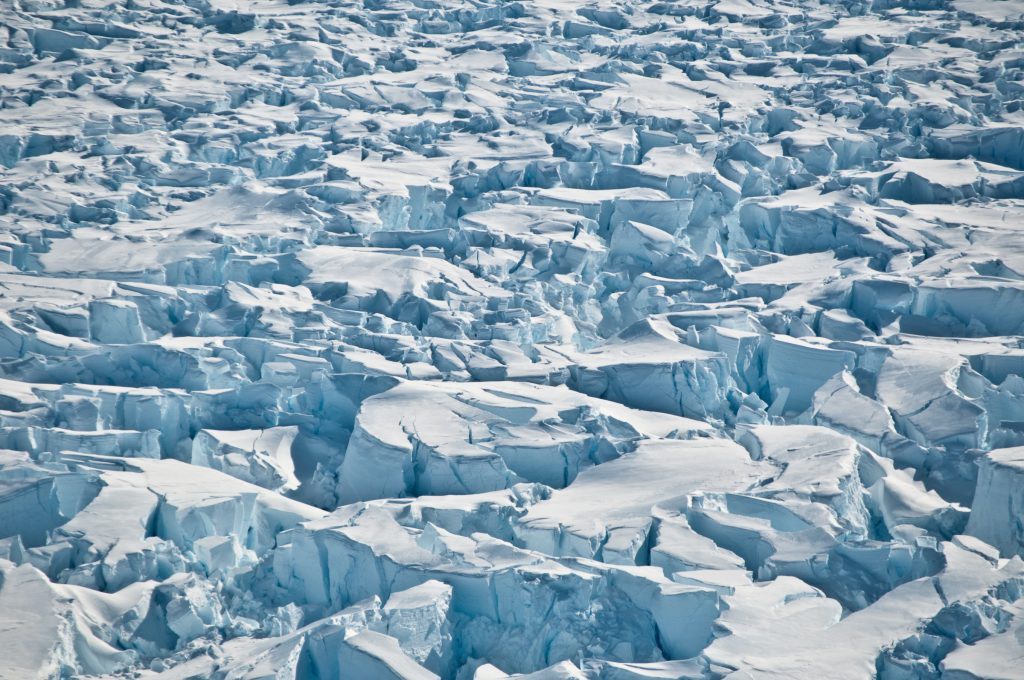 Some 3 trillion tons of ice has melted from Antarctica since 1992, and thereâ€™s not much time to change course. Thatâ€™s according to a sweeping group of studies published Wednesday in the journal Nature that looks at the past, present and future of Antarctic ice sheets.

Scientists are calling it the most complete picture ever of ice loss on the southern continent.

â€œScientists are really speaking with one voice and we hope that it will help the public understand the problem,â€� says project team member and ice sheet expert Beata Csatho of the University of Buffalo.

The main study looks at the past 25 years and shows that the ice melt in Antarctica raised sea levels by nearly one-third of inch. Two-fifths of that rise came between 2012 and 2017.

It may not sound like much, but sea level rise is not distributed evenly around the world, and even small amounts can increase flooding damage during storm surges. The changes will also likely impact ocean chemistry and marine ecosystems, the scientists said.

This main climate assessment is called the Ice Sheet Mass Imbalance Inter-comparison Exercise. It was led by Erik Ivins of NASAâ€™s Jet Propulsion Laboratory in California and Andrew Shepherd of the University of Leeds in England. Support came from NASA and the European Space Agency.

Many previous studies have shown ice melting from the southern continent, whatâ€™s different here is the broad scope and wide agreement on details among so many international researchers. The analysis boasts 84 scientists as co-authors and made use of 24 different satellite surveys.

In perhaps their most alarming find, Antarctica was melting at a steady rate â€” one-fifth of a millimeter per year â€” before 2012, when the rate suddenly tripled and stayed at that pace. The current melt rate is now faster than at any time over the past quarter century.

â€œThis has to be a concern for the governments we trust to protect our coastal cities and communities,â€� Shepherd said in a media release. 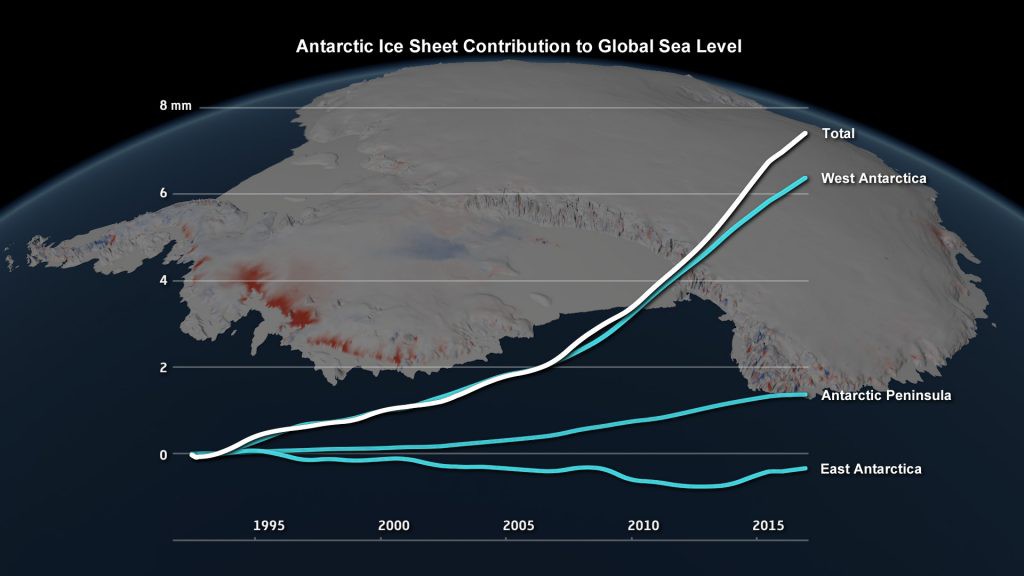 Sea level contribution due to the Antarctic ice sheet between 1992 and 2017. (Credit: imbie/Planetary Visions)

The satellite data also showed that the most extreme melting came from two enormous glaciers in West Antarctica â€” Pine Island and Thwaites.

In addition to fast melting glaciers in West Antarctica, as well as the Peninsula, part of the problem is that East Antarctica isnâ€™t gaining much ice. Climate change brings warm weather, which increases precipitation in many regions. This brings more snowfall to parts of the southern continent and helps offset sea level rise, past research suggested. But in this latest assessment, scientists say the vast reaches of East Antarctica have actually gained little ice since â€˜92.

The headline-grabbing paper was just one of a group of large studies published simultaneously in Nature. Others looked at the history of ice sheets across the continent, as well as the global influence of the Southern Ocean, which circulates around Antarctica.

Another study attempted to look 50 years into Antarcticaâ€™s future. Their findings showed that the decisions we make over the next decade will determine whether or not Earth is locked into an additional 3 feet of sea level rise. The team studied two different futures â€” one where humans take extreme action to avoid climate change and another where the planetâ€™s governments do not tamp down greenhouse gas emissions.

They also imagined what could happen to the land in Antarctica itself without concerted regulation as the ice melts.

The scientists suggest that rampant mining, tourism and overfishing could decimate the landscape and its animals, introducing invasive species and changing the entire structure of ecosystems. Current international treaties prohibit such extreme resource extraction, but as the continent warms, it could become tough to resist, the scientists say. Permanent hotels could pop up along with a heavier human footprint. And because the local environment is so important to global ecosystems, the effects could extend far beyond the Antarctic Circle. 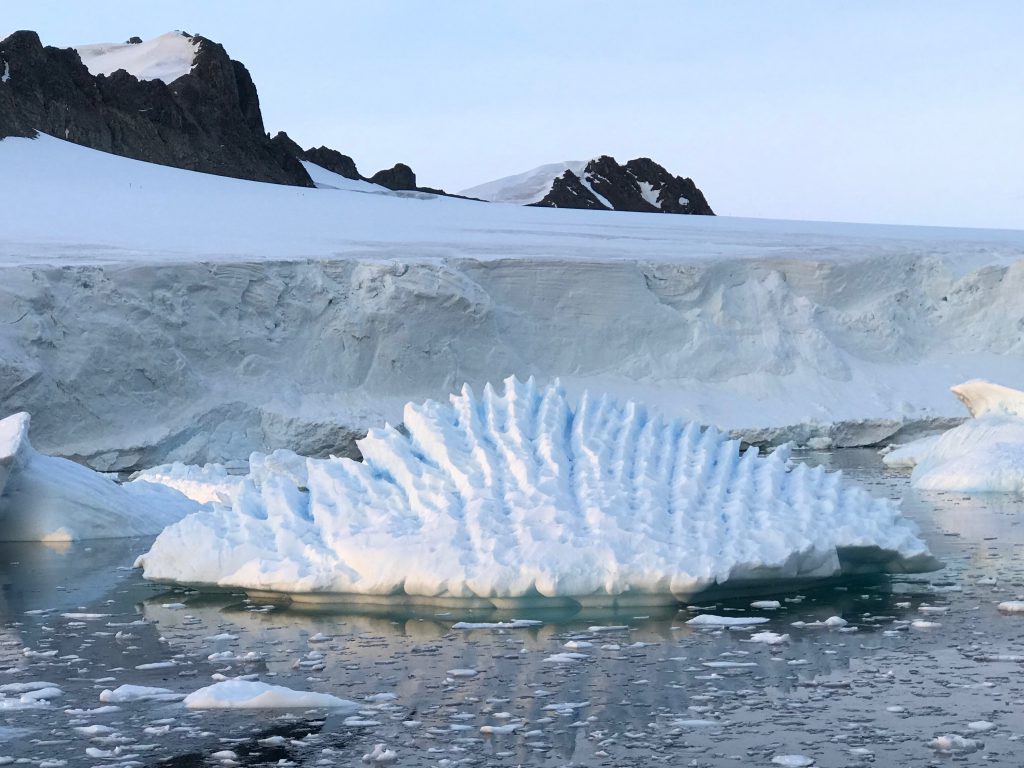 The sobering results come as climate scientists gear up for several large-scale missions that will provide an even more detailed image of ice loss. Among them is a much-anticipated NASA satellite called ICESat-2, which launches this fall and will use lasers to study ice sheets. On the ground, the National Science Foundation has teamed with its UK counterparts at the Natural Environment Research Council on a $50 million mission to send eight teams of international researchers to poke and prod the fast-melting Thwaites Glacier.

The biggest questions now facing climate scientists are how much and how fast Antarctica might melt. With these sweeping efforts underway, scientists should have a much better idea of the long-term consequences over the coming decade â€” just as a crucial decision-making window closes.

One of the study authors, climatologist Chris Rapley of the University College London said that, back in 2005, heâ€™d suggested the sleeping giant seemed to be waking up. These latest results suggest the giant has begun â€œstretching its limbs,â€� he said.