Soar over Pluto&#039;s mountains and icy plains in this cool flyover based on data from NASA&#039;s New Horizons spacecraft 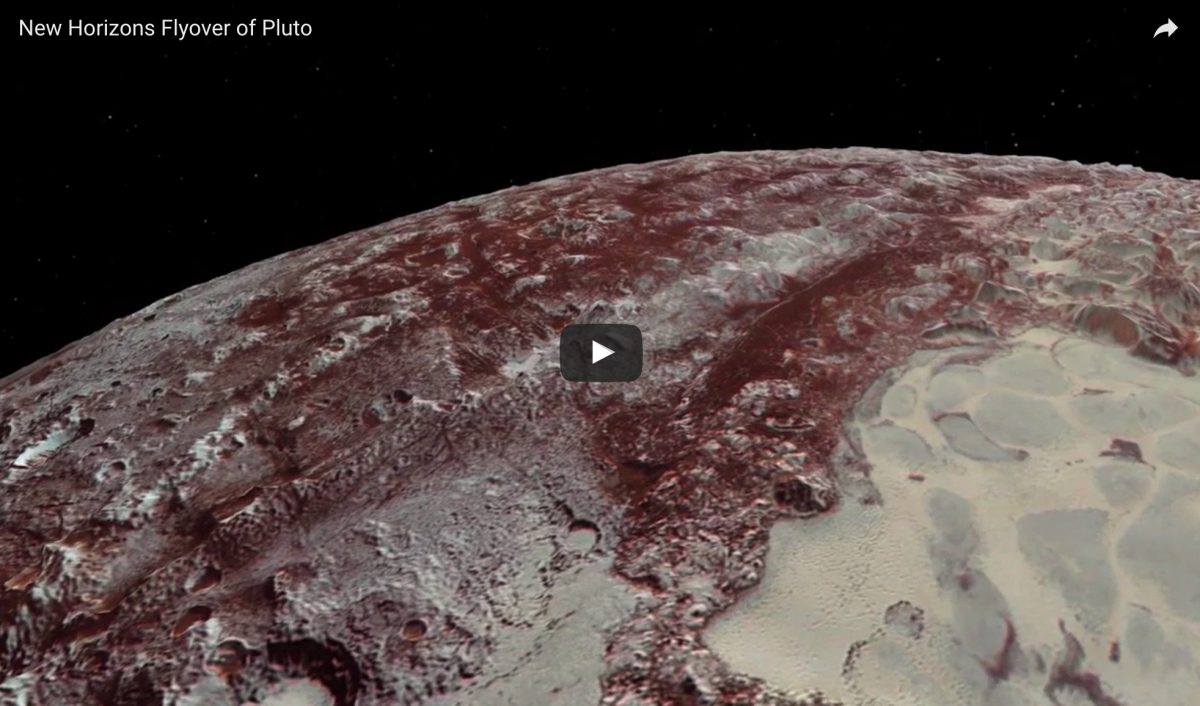 While mission scientists were at it, they also produced a spectacular flyover of Charon, Pluto’s largest moon

The still images of Pluto sent home to Earth by NASA’s New Horizons spacecraft in July of 2015 were remarkable enough.

The incredible distance to Pluto — 4.67 billion miles! — meant that until then, the dwarf planet was long shrouded in mystery. And then, BOOM! — mind boggling images of jagged mountains, flowing glaciers and icy plains.

Now, mission scientists have draped imaging data over a digital elevation model of Pluto to create the flyover above — a video showing what it might be like if you could visit Pluto in a spaceship.

As NASA describes the scene, the dramatic Pluto flyover begins:

. . . over the highlands to the southwest of the great expanse of nitrogen ice plain informally named Sputnik Planitia. The viewer first passes over the western margin of Sputnik, where it borders the dark, cratered terrain of Cthulhu Macula, with the blocky mountain ranges located within the plains seen on the right. The tour moves north past the rugged and fractured highlands of Voyager Terra and then turns southward over Pioneer Terra — which exhibits deep and wide pits — before concluding over the bladed terrain of Tartarus Dorsa in the far east of the encounter hemisphere.

The digital mapping and rendering that went into creating the flyover were carried out by Paul Schenk and John Blackwell of the Lunar and Planetary Institute in Houston. They also gave the same treatment to data returned by New Horizons after it flew by Charon, Pluto’s largest moon. Here’s the result:

The equally exciting flight over Charon begins high over the hemisphere New Horizons saw on its closest approach, then descends over the deep, wide canyon of Serenity Chasma. The view moves north, passing over Dorothy Gale crater and the dark polar hood of Mordor Macula. The flight then turns south, covering the northern terrain of Oz Terra before ending over the relatively flat equatorial plains of Vulcan Planum and the “moated mountains” of Clarke Montes.

It must be said that both Pluto and Charon wouldn’t look exactly like this if you were flying over them in a spaceship. To help us see the topography, in both video flyovers the relief has been exaggerated by two to three times. NASA also says the colors of surface features on Pluto and Charon have been enhanced “to bring out detail.

Even so, this is as close as we’ll ever get to a real flyover. I hope more such planetary experiences are in store.