Snakes Use Their Tongues and Tails as Lures for Prey 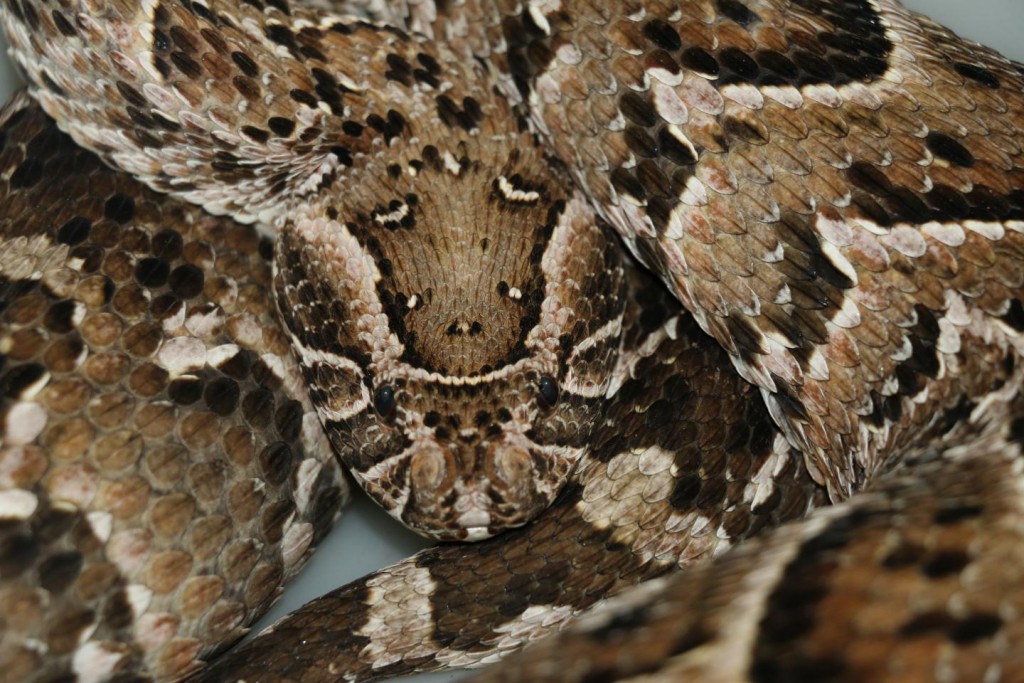 The African puff adder kills more people with its venomous bite than any other snake on the continent. To find prey, it doesn’t need to go hunting; the snake simply lies in wait and attacks small animals that wander past. An ambushing puff adder is both camouflaged and unsmellable to predators. This snake is not goofing around—but it does like to stick its tongue out. Researchers discovered that puff adders in the wild waggle both their tongues and their tails to lure prey, like a prolonged and high-stakes hokey-pokey dance.

Xavier Glaudas, a postdoc at the University of the Witwatersrand in South Africa, and herpetology lab directory Graham Alexander didn’t set out to study any bizarre new snake behaviors. They simply wanted to watch puff adders hunting in the wild, Glaudas says. They used a simple strategy no one had tried before: pointing videocameras at snakes and watching for a long, long time.

First the researchers tracked down snakes that they’d previously implanted with radio transmitters. Puff adders may stay in one place for hours or days—or even weeks, Glaudas says—waiting to ambush prey. They might hunker down under a bush during the day and return to the same lookout at sunset, he says, or find a new one. Once the scientists found a motionless, ambushing snake, they set up a surveillance camera on a tripod pointed at the animal, then left it to its business.

They ended up with footage of 36 ambushing puff adders totaling more than 4,600 hours. This was about 193 continuous days’ worth of video footage (a fact that merited an exclamation point in the authors’ paper, although maybe they just couldn’t see what keys they were pressing anymore).

Out of all these hours, Glaudas and Alexander spotted a few minutes that made them “quite surprised,” Glaudas says.

On 5 occasions, an ambushing snake briefly used its tail as a lure. It held the tip of its tail above the ground and waggled it, trying to catch the attention of a prey animal. And on 11 occasions, snakes used their tongues as lures. Ordinarily, puff adders dart their tongues in and out to sample the air. But this behavior looked different: a snake trying to lure prey held its tongue out for more than 10 times as long as a standard tongue flick.

Before this, no one had seen puff adders using their tails or tongues as lures. Tongue luring was especially interesting because the researchers noticed that snakes didn’t try it with every kind of prey. A snake only used its tongue—which “resembles a small black worm,” the authors write—when trying to tempt frogs and toads. For other small animals passing their ambush site—birds, mammals, reptiles—they didn’t stick out their tongues.

Glaudas speculates that this may be because amphibians are easier targets than other animals. The cameras captured several occasions where tongue luring worked to draw in amphibian targets. Other prey such as rodents, Glaudas says, “may possibly be difficult to fool.”

This was also the first time anyone had seen any kind of snake on land using its tongue as a lure. Similar behaviors had been spotted in four species of aquatic snakes, along with one turtle and a bird.

Captive puff adders might not use their tongues as lures, Glaudas guesses—maybe because people usually toss rodents into their tanks for food, not amphibians. But because these predators can tailor their hunting methods to different kinds of prey, it might take watching thousands of hours of video footage to learn all their tricks.