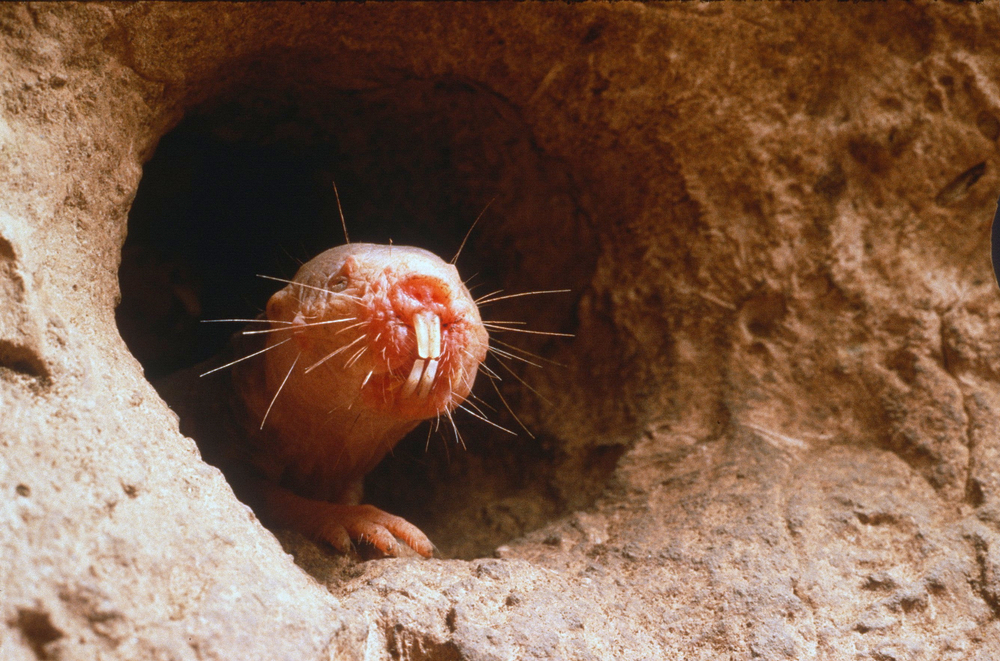 In colonies of naked mole ratsâ€”wrinkly, pink-skinned rodents with oversized front teeth that live in extensive underground tunnel systemsâ€”one special couple gets to reproduce, creating the entire next generation for the colony.

For most mammals, breeding comes at a heavy cost â€” reproduction shortens lifespans. But for naked mole rats, procreating appears to slow aging, the exact opposite of whatâ€™s normally seen. In a new study, researchers pin down the genetic alterations that give breeding naked mole rats such long lifespans to attempt to explain how it happens. Itâ€™s challenging our current models of why aging happens at all.

Naked mole rats are medical marvels. The rodents are resistant to some types of cancer and they stay in good health throughout their exceptionally long lives. The animals can live to be about 30 years old, 368 percent longer than models of longevity predict. They also remain fertile throughout their lives, another paradox for scientists.

According to a popular theory of aging, animals can either invest their bodyâ€™s resources in maintaining healthâ€”thereby increasing their lifespanâ€”or they can devote that energy to reproduction, which ensures the survival of the species but shortens individualsâ€™ lives. Until now, the accepted knowledge was that one is a trade-off for the other. Animals canâ€™t have it both ways. But naked mole rats again prove an exception.

Most naked mole rats are workers charged with finding food, defending the colony and taking care of the breeding pairâ€™s young. The presence of a breeding pair suppresses sexual maturation in the workers by inhibiting sex hormones necessary for them to transition through puberty. Whether male or female, these sexually stunted rodents look and behave similarly â€” even their genitalia â€” but all have the ability to become a breeder in the right circumstances. If a naked mole rat establishes a new colony for example, that individual will undergo a series of changes written into their genomes to become a breeder.

Martin Bens, an aging researcher at the Leibniz Institute on Aging in Jena, Germany, who led the new research, knew naked mole rat breeders lived longer than non-breeding, worker rats, but he wanted to figure out why. To find out, he and a team of researchers assessed what genes might be at play. They took stock of how gene expression differed between a breeding pair and the rest of the naked mole rat colony. For good measure, they also compared gene expression in another social rodent: guinea pigs, which live about 12 years on average, and who can all become parents.

When the team analyzed the rodentsâ€™ gene expression in 10 tissues central to aging, sexual reproduction and status, they found the genes that made naked mole rats different from guinea pigs were also the genes that differentiated breeding pairs from worker rats. In addition, genes the formation of ATP seem be upregulated in naked mole rats, while other genes related to the immune system and the ability to metabolize fatsâ€”processes associated with agingâ€”were turned down in naked mole rats but ratcheted up in guinea pigs, the team reports Thursday in BMC Biology.

â€œThis means that our current understanding and theories of aging are still incomplete,â€� Bens told Discover in an email.

Caleb Finch, a biogerentologist at the University of Southern California in Los Angeles, who was not involved in the research, applauds the work, but calls it early days. Heâ€™d like to know how gene expression differs in multiple tissues between very young and very old individuals in both species.

In a study published back-to-back with Bensâ€™ research, Alessandro Ori, a group leader at the Leibniz Institute on Aging, has begun to address that question by examining liver proteins in young and old naked mole rats compared to guinea pigs. In that work, Ori and team found the livers of elderly naked mole rat livers are unique. They possess a greater concentration of detoxifying enzymes and improved fat metabolism, both things that might help them live longer. And the same molecular networks affected by aging in the naked mole rats are found in humans, as well, hinting at insights into our own longevity.