Saturn&#039;s Hexagon Could Be an Enormous Tower

Above Saturn’s north pole, clouds swirl in a distinct and stunning hexagonal shape. Discovered by NASA’s Voyager mission in 1981, Saturn’s hexagon is striking to behold, and one new study suggests that this six-sided vortex may actually be hundreds of kilometers tall.

After the Voyager mission pushed human exploration far out into the solar system and, subsequently, discovered Saturn’s hexagon whirling at a low altitude, the Cassini spacecraft returned to the ringed planet in 2004 and continued these observations. The spacecraft even spotted a high-altitude vortex at the planet’s south pole, but this vortex was not hexagonal.

Now, as part of a new study using Cassini data, researchers have discovered, for the first time, a high-altitude vortex forming at Saturn’s north pole. This vortex was spotted as the planet’s northern hemisphere approached summertime. And it has a hexagonal shape like the famous hexagon originally discovered closer to the planet’s surface. These findings suggest that the high-altitude vortex may be influenced by the low-altitude vortex, potentially forming an immense, tall tower, according to a statement. 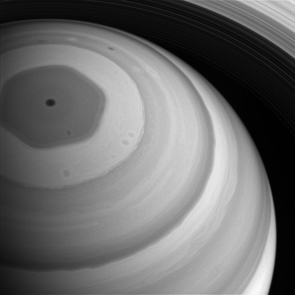 Leigh Fletcher of the University of Leicester, UK, the lead author of this new study, described Saturn’s hexagon in an email as “a meandering jet stream” with a “hexagonal, six-sided appearance when viewed from over the pole.”

“The hexagon is just a current of air, and weather features,” Andrew Ingersoll, of the Cassini Imaging Team, said about the structure, according to a NASA statement.

While we’ve known about Saturn’s hexagon since 1981, this discovery of a hexagonal vortex at a higher altitude was a shock to the team. Fletcher said that “the presence of the hexagon, hundreds of kilometres above the clouds, was a total surprise.” The team didn’t expect to find an almost mirror image of Saturn’s famous hexagon shape farther up in the clouds.

Unfortunately, Saturn’s seasons last for a long time. “One Saturnian year spans roughly 30 Earth years, so the winters are long,” co-author Sandrine Guerlet from Laboratoire de Météorologie Dynamique, France added in the statement. So, these “seasonal vortexes,” or vortexes associated with seasons like Saturn’s summer, can’t be observed for long stretches.

That means Cassini couldn’t see what was happening in the north pole’s high altitudes for many years because it was simply too cold to make observations.
However, Fletcher said that it’s not clear if the vortex is always there but is just too cold to observe, or if the vortex only appears in warmer seasons. However, thanks to Cassini’s remarkable lifespan, the craft was able to watch the planet long enough to gather invaluable data on Saturn’s incredible vortices.

Still, a number of questions remain. “How did the hexagon come to be, how has it been stable for so long, and is it connected in any way to the deeper interior of Saturn?” Fletcher said. It’s also unclear how similar the northern and southern vortices are, as only one pole seems to have hexagonal vortices, according to the statement. But Fletcher said that despite outstanding questions, this work is “an important constraint on all our future models of this fascinating structure.”

This new study was published September 3, 2018 in the journal Nature Communications.