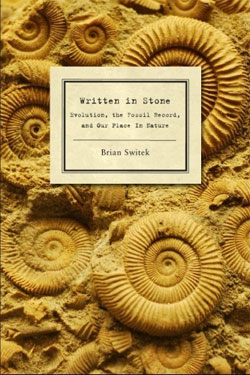 Rocks are full of stories. They contain the petrified remains of long-dead animals and in every fossilised bone, scale and track, there are awe-inspiring accounts of the history of life on this planet. Of course, fossils themselves are poor narrators. To uncover their tales, you need a storyteller with an expert’s knowledge and a writer’s flair. Brian Switek is that storyteller.

In his first book, Written in Stone, Switek uses the remains of prehistoric creatures to illustrate how the first tetrapods (four-legged animals) invaded the land from the sea, how the ancestors of whales went back to the sea from the land, and how a special branch of the dinosaur family eventually took to the air as birds. This is thrilling stuff, full of memorable characters including shovel-tusked elephants, huge leviathans, and fuzzy dinosaurs. In a wonderful penultimate chapter, Switek even tackles our own origins in one of the best accounts of the topic that I have read.

These stories haven’t been chosen at random. Each one reveals a subtle new aspect about the nature of evolution, which Switek brings home with uncompromising accuracy. The book is the richer for it. Instead of the claims of “missing links” and direct ancestors, we get a much subtler picture of life’s history, complete with failed experiments and bursts of diversity. There is grandeur in this view of life and Switek captures it well. Immersing yourself in these stories, you get a true sense of life’s incredible diversity, the great panoply of forms of which today’s species are a small and ever-shrinking part.

But Written in Stone is really a book about two kinds of fossils. Switek doesn’t just consider bodies entombed in rock; he also digs up fossil ideas. Through quotations and historical anecdotes, Switek unearths the intermediate hypotheses that illustrate how our knowledge has itself evolved. Some of these past ideas are fanciful and seemingly absurd (birds evolving from flippered dinosaurs, anyone?) but they greatly enrich what could have been a textbook account of the fossil record.

Switek tell the stories of the men and women who influenced the way we think, with figures like Lyell, Owen, Darwin and Koch looming larger than life. He tells us not just about the discoveries but the way they were discovered, from the 17th century to the present day. And I do mean present; the book is remarkably up-to-date and even includes findings about dinosaur colours and Neanderthals that were published earlier this year.

This is science narrated with maturity, reverence and grace; the epilogue alone is worth the asking price. The abundance of technical terms might alienate some readers, but the prose is always captivating and contains nary a hint of hype or sensationalism. The result (and mainstream journalists should take note) is that Switek’s writing speaks for itself. When he says that a petrified Archaeopteryx is “the most beautiful fossil ever discovered”, you believe him.

Some disclosure is required: I have seen this book grow from an early draft chapter that I commented on several years ago to the polished tome that sits on my desk now. I introduced him to the agent who helped him to make the book into a reality. And I’ve seen Brian rise in fame in the science writing world and nodded sagely at his uncommon ascent. I consider him to be a friend and colleague but even if that weren’t the case, my review would be similarly positive and my conclusion would be the same: Written in Stone, quite simply, rocks.

Brian Switek blogs at Laelaps, as part of the Wired blog network. He can be found on Twitter at @laelaps.