Researchers Apologize For Writing “Derpy” In A Paper

It appears that memes and science don’t mix well. A pair of researchers have published an apology in a peer-reviewed journal – for using the word “derpy” in an earlier paper.

In April 2016, Archives of Sexual Behavior published a piece called Fighting the Derpy Science of Sexuality by Banu Subramaniam and Angela Willey.

In this paper, Subramaniam and Willey criticized studies of biological differences between human groups:

The various sciences of‘‘difference’’ – sex, gender, race, class, sexuality, nationality – where studies that claim evidence for biological differences between two groups often make the cover stories in scientific journals and popular magazines. In-group variation rarely leads to a re-consideration of a priori categories and studies with negative results do not get the same space, in journals or in the press… biological research marches on in its derpy ways.

A fair point, if rather one-sided. However, the authors now say that they were wrong to use the term “derpy”, because it’s been brought to their attention that it has been used as an “ablist slur”. Willey and Subramaniam say that their intentions were innocent:

The word ‘derpy’ was introduced to us as a pop-cultural term that meant believing in something despite the fact that it has been disproven.

In the original paper, they quoted Paul Krugman who in a 2015 article defined “derp” as the phenomenon where “people keep saying the same thing no matter how much evidence accumulates that it’s completely wrong.”

I think I see the problem. As I’ve seen it used, there’s a distinction between “derp” (meaning vapid or silly talk) and “derpy”, which is more or less a synonym for stupid. “Derpy” doesn’t mean “believing in something despite the fact that it has been disproven”, it’s much broader. In other words, you don’t have to be derpy to derp, and if you are derpy, derping might be the least of your problems.

As far as I know, this is science’s first “derpy”-based scandal, but the entertainment world is way ahead of science in this regard. In 2012, the My Little Pony: Friendship is Magic cartoon ran an episode featuring a klutzy character called “Derpy”. However, after worries that she appeared to be a stereotype of the “mentally handicapped”, the character was renamed (and her voice re-recorded).

A change.org petition to “save Derpy” wasn’t enough to prevent her dederpification. 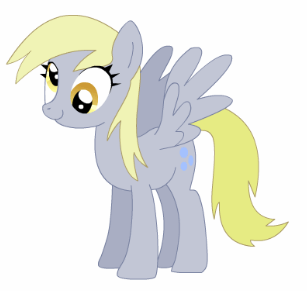 I wouldn’t say that “derpy” is always used as an ablist slur, although it does have a subtext of “intellectually impaired”. The eyes pointing in different directions (strabismus) that is ubiquitous in visual representations of “derpy” individuals does call to mind disability, not just below-average IQ.