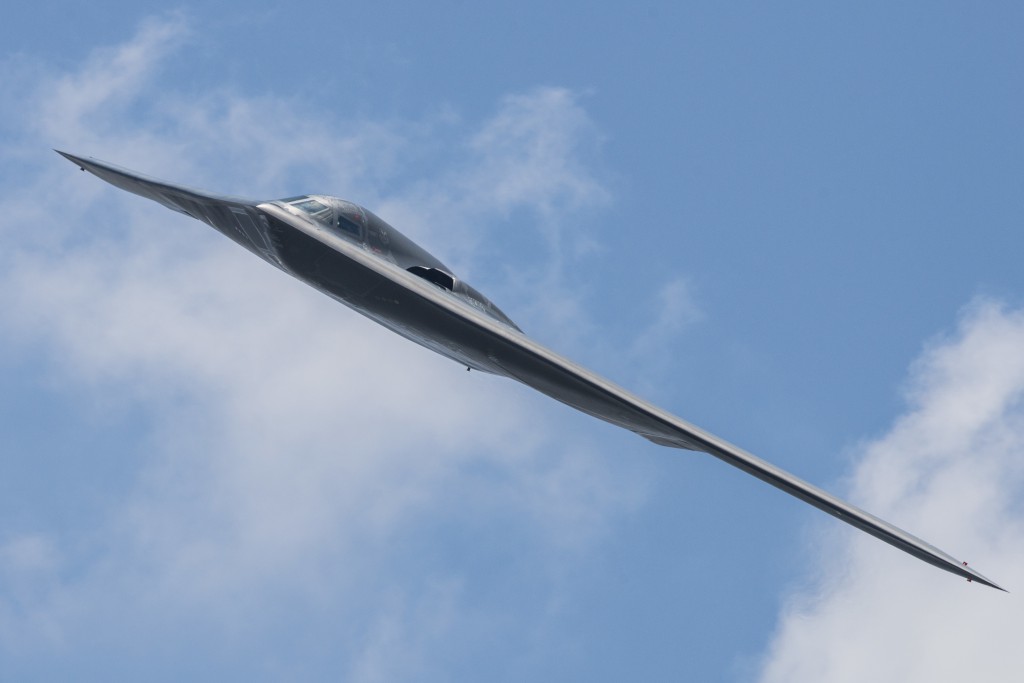 A 509th Bomb Wing B-2 Spirit conducts a fly-by during the Scott Air Force Base 2017 Air Show and Open House June 11, which celebrates the base’s 100th anniversary. The Air Force plans to replace the B-2 Spirit bomber with the similar-looking B-21 Raider bomber starting in the mid 2020s. Credit: U.S. Air Force photo/Senior Airman Tristin English

The U.S. Air Force’s future B-21 Raider bomber may have the option to remove the human pilots from the cockpit and effectively become a large drone bomber. In one of the more unlikely scenarios, B-21 Raiders could theoretically end up carrying nuclear bombs or missiles without a human pilot onboard. That seems like an extremely remote possibility given the U.S. Air Force’s current views, but other countries may not hesitate as much to turn uninhabited aircraft into nuclear drone bombers, according to a new report.

Nobody in the U.S. defense community seems to be pushing nuclear drone bombers as a great idea, says Paul Scharre, project director for the 20YY Warfare Initiative at the Center for a New American Security (CNAS). But Scharre and his colleagues still recommend that the Pentagon examine the possible implications of nuclear drone bombers in their recent report titled “Drone Proliferation: Policy Choices for the Trump Administration.” After all, other countries that have nuclear weapons may also have a different risk calculus in mind when considering the idea of putting nuclear weapons aboard drones.

“Given that countries are getting access to larger drones that can operate with larger payloads, and some of those countries have nuclear weapons, how should we be reacting?”says Paul Scharre, project director for the 20YY Warfare Initiative at the Center for a New American Security (CNAS). “It hasn’t gotten much attention in the U.S. defense community because it’s considered a crazy idea, but other countries may think about this quite differently.”

Russia is one example of a country that may have a different mindset. In 2012, a Russian Air Force lieutenant general suggested that Russia could deploy an uninhabited nuclear bomber by the 2040s. There is some precedent for Russia’s having greater comfort in handing nuclear weapons over to robotic systems, given its reliance on a “Dead Hand” system (also called “Perimeter”) that ensures automatic nuclear launches and retaliation against the United States if the U.S. military was ever to destroy the Russian leadership and command and control centers.

Unlike nuclear-armed cruise missiles or ballistic missiles, an uninhabited nuclear bomber could potentially end up on patrol in a holding pattern during a crisis situation. Such a delicate situation would require the drone nuclear bomber to have extremely trustworthy onboard autonomy and reliable communications with its remote human handlers, so that humans could ensure that they retain control over its nuclear payload. That complication of command and control is just one factor that the U.S. military might want to study, even if it’s simply to prepare for the possible complications of another country deploying nuclear drone bombers.

The U.S. military has been careful to keep a human in the loop for its “nuclear triad” system that can deploy nuclear weapons from land-based missile silos, from stealthy submarines hidden under the sea, and from an aging fleet of 66 nuclear-capable strategic bombers in the air. That nuclear triad will receive a much-needed upgrade to the air arm when the B-21 Raiders begin becoming operational in the mid 2020s and begin replacing B-52 and B-2 bombers that have typically already been in military service for more than 45 years.

It’s fine to keep human pilots aboard nuclear-armed strategic bombers as long as they have the stealth or other capabilities to survive their missions. But many nuclear-armed countries lack the ability to build sophisticated, long-range bombers that can survive the gauntlet of enemy air defenses and deliver nuclear bombs or missiles to their targets half a world away, Scharre says. One or more of those countries may see drones as nuclear delivery vehicles that have some tactical advantages in future wars.

“When you look at North Korea, Pakistan and India, those countries are in very different strategic positions in terms of vulnerability compared with the United States,” Scharre says. “Just because it’s not a great idea in a U.S. system doesn’t mean others don’t think about it that way.”