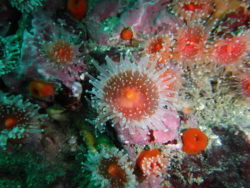 When I was a kid, my family and I used to love watching “The Undersea World of Jacques Cousteau.” Every week we’d set out the TV tables and share our dinner with the French marine explorer as he led us on underwater adventures and taught us to appreciate the beauty of science and the sea.

His show is one of the main reasons I became an environmental reporter and earned my scuba diving certification in Monterey Bay, and it made a similar positive impact on millions of other kids and families across the globe.

Although it aired almost a half century ago, the message of Cousteau’s program was never more relevant than it is today. Pollution, climate change, and intense resource depletion now threaten ocean landscapes on an unprecedented scale and galvanize Cousteau disciples like me to search for ways to help.

So I was excited to learn about Reef Check, a nonprofit founded in 1996 that turns scuba divers into citizen scientists and deploys them to collect data about the world’s coral reefs and, more recently, about the kelp forests and rocky reefs in my home state of California.

In 1997, Reef Check conducted the first-ever global survey of coral reef health. Five years later the organization published a report that pulled together data collected by thousands of citizen scientists in 80 countries. That report concluded that no reef in the world remained untouched by human impacts and, since then, Reef Check scientists and citizen scientists have studied coral reefs in every tropical sea on the planet and used their data to inspire people and businesses to protect them.

The project is a partnership with the California Department of Fish and Wildlife and grew from California’s Marine Life Protection Act. The 2001 law led the state to create 120 underwater Marine Protected Areas (MPAs)—similar to California’s state park system—that form a sanctuary network from Oregon to Mexico.

“The hope is that California’s MPAs will help coastal ecosystems be more resilient in the face of challenges like climate change and disease by reducing other stressors such as human recreation and overfishing,” Freiwald said.

In 2005, California started contracting with Reef Check to train and lead an army of scuba diving citizen scientists who monitor both inside and outside the MPAs to evaluate how well the program is working.

“We are the only program that does this over the entire California coastline,” Freiwald said. 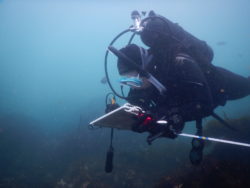 Reef Check runs citizen science trainings every spring, and so far about 1,200 university students and individuals from the general public have participated.

“Volunteers are required to have open water dive certification and at least 30 dives under their belt, and they must provide their own gear. But the dives are only around 60 feet deep and no special diving skills are required,” Freiwald said

The trainings are four days long (two weekends in a row) and teach participants the scientific method and how to identify 75 different species of fish, invertebrates, and kelp.

The first training weekend includes time in the classroom, at an aquarium, and in the pool, and the second weekend involves six ocean dives over two days where participants practice the skills of underwater monitoring. They learn how to monitor a 2 meter by 2 meter transect area, count various species of fish, invertebrates, and algae, and record data on a slate.

“We offer a pretty rigorous training because we want to produce scientifically valid data,” Freiwald said.

At the end of the training, participants take a species identification test and are only allowed to monitor species they have passed on the test. However, volunteers are not required to know every species to start monitoring and many increase their skills gradually by repeating the training over several years.

The trainings are offered for a fee, but once a volunteer completes the training the monitoring sessions are free.

Throughout the summer, Reef Check volunteers go out in teams of eight to 18 people and explore rocky reefs covered with crabs, sea stars, and tiny shrimp; dancing kelp forests that shelter bristle worms, rockfish, and sea otters; and cold waters filled with sand dabs, jellies, and an occasional octopus.

The data they collect is shared with the state of California and is also made public on the Reef Check website, and recent findings show these ecosystems are being hit by multiple stressors.

“For instance, during the last few years a combination of rising ocean temperatures and a disease called Sea Star Wasting Syndrome decimated sea star populations and led to a drastic increase in sea urchin numbers and a severe reduction in the size of kelp forests in Northern California,” Freiwald said. This information is being shared with scientists and conservationists to devise strategies to help these ecosystems heal. 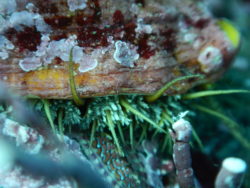 Lastly, the data collected by Reef Check is shared with the citizen scientists themselves, who combine it with stories of their underwater experiences to educate their friends and communities about ocean conservation—ensuring that laws like the California’s Marine Life Protection Act stay strong.

“It is amazing how dedicated the people who participate are,” Freiwald said.

I think Jacques Cousteau would be impressed.