Rebirth and Recovery in the Shadow of Chernobyl 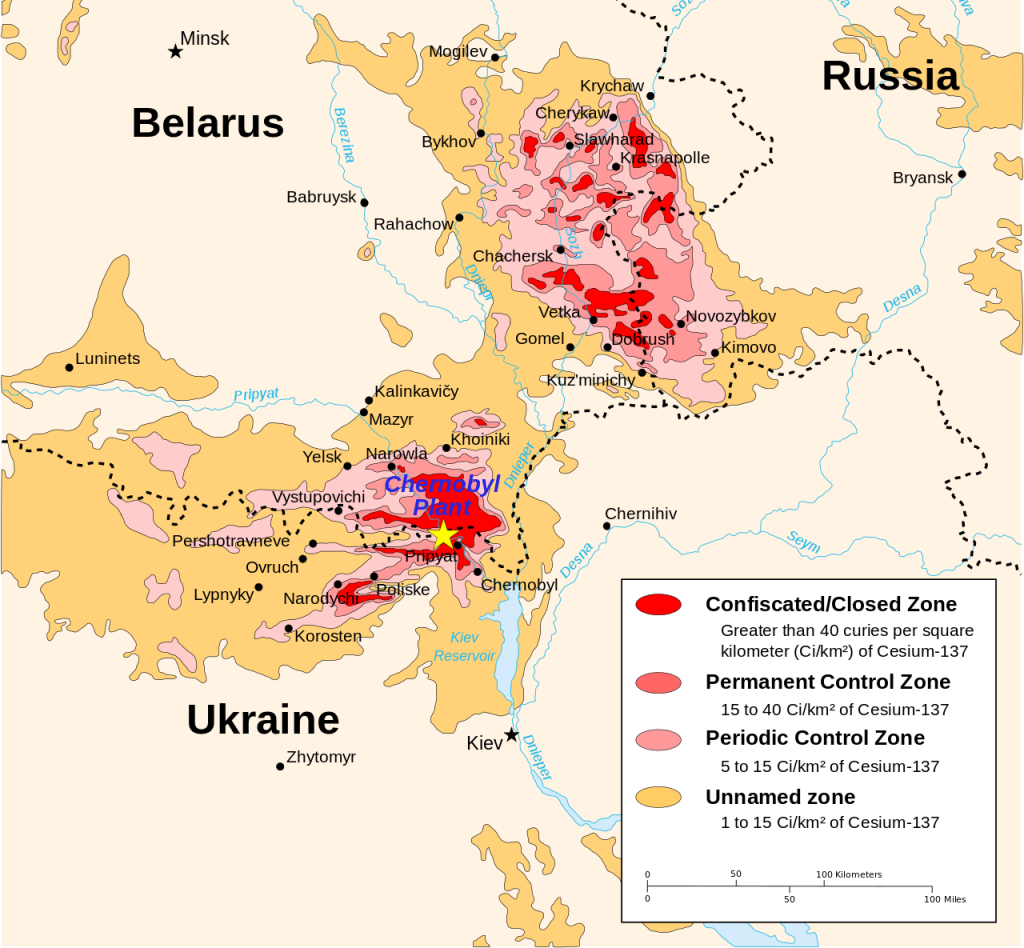 Contamination map of the Chernobyl region in 1996. Twenty one years later the hottest areas remain off limits, but quasi-normal life has returned in the less affected “unnamed zone,” including the Rivne Province at the west (left) end of this map. (Credit: CIA Factbook/Sting/MTruch)

Regular readers of this blog know that I normally focus on cosmic topics: comets, exoplanets, dark matter, the search for alien life, and the like. I don’t tangle so much with the everyday challenges of life here on the ground. I enjoy taking a break from the quotidian. But the truth is, the two sides are never very far apart. They are both–all–part of one universe, governed by one set of physical laws. The nuclear reactions that regulate the afterglow of a supernova explosion are the exact same ones that established the harsh consequences of the Chernobyl nuclear accident.

I’m not picking that example at random. I recently had the privilege of working with two historians (Kate Brown at the University of Maryland Baltimore County, and her colleague Olha Martynyuk of the National Technical University of Ukraine) on their first-person exploration of the legacy of the 1986 Chernobyl incident on villagers living in the outer part of the contaminated zone. They returned from their trip full of unexpected stories about life in one of the most notoriously irradiated parts of the world. Their experience got me thinking once again about the juxtaposition of cosmic and terrestrial issues.

In an exploding star like supernova 1987a, the energy of radioactive decay is a side-effect of devastation, but also a sign of life to come. The heavy elements forged in that nuclear inferno are crucial for the emergence of planets and, on at least one world, biochemistry. It’s easy to see the smaller-scale devastation that came with the Chernobyl accident. The signs of birth and rebirth are not so obvious, but they are there, too. For one, there is nuclear power itself which, despite its all-too-obvious dangers, has been important in electrifying the modern world–and doing so without carbon emissions and the other hazards associated with coal power.

When Brown and Martynyuk recently visited the towns of Polesia, a forested region within Ukraine’s Rivne Province, they found another kind of rebirth underway. As they write: “We expected to see tumbled-down peasant cottages and villages inhabited mostly by elderly, as in many regions directly in the lee of the plant. Instead, we zoomed along on remarkably good roads, checked into a comfortable new roadside hotel, and drove through freshly built suburban houses surrounded with grills, sprinklers, lawn dwarfs, you name it.”

A significant part of the new local wealth comes from the contaminated land itself. Villagers have built a lucrative local industry out of harvesting woodland berries and mushrooms. As long as their bounty meets European Union radiation standards, they can export a little bit of the Chernobyl legacy, and use the currency to buy clothing, processed foods, and consumer goods from the West. The turnaround is a result of declining radiation levels, a surprisingly mature understanding of radiation risks in Western Europe, and above all a resilient local culture.

Brown and Martynyuk watched the pickers (almost all of them women) hard at work, revitalizing the Polesian economy on a human-powered scale. Kids are generally not supposed to be in the woods because of the radiation, but they were there, too. The two historians took photographs to document this rarely discussed rebound. I’ve included a selection of their photos here, along with commentary based on their observations. Brown and Martynyuk were especially impressed by a berry picker named Galina Ches’ko, who shared with them her feelings of resignation and determination to make the best of her situation.

Life in Polesia is not easy, and it is not terribly healthy either. Then again, I can’t help thinking about all the other chemical insults we have inflicted on the Earth, and on ourselves. People often regard radiation as a unique threat, utterly distinct from chemical dangers such as aresenic-laced rice or carbon soot from stoves and power plants. In reality, we face a continuous spectrum of risks–nuclear and chemical, natural and human-generated. It is up to us to do our best to manage them and to live up to our own responsibilities. We cannot stop stars from exploding or cosmic rays from crashing into our atmosphere, but we can be more responsible in how we minimize and manage our own acts of contamination.

What is most heartbreaking about the Chernobyl story is not the inherent risk of nuclear power, but the cruel callousness of the authorities whose job it was to keep those risks under control. Government failed the people in the Chernobyl region. But today the pickers of Polesia are unceremoniously accomplishing what big development agencies and bureaucratic programs failed to do: returning the contaminated Chernobyl territory to commercial activity, and adapting to life on a damaged planet.

All photographs are courtesy of Kate Brown and Olha Martynyuk. Read their full account of the Polesian berry pickers here. 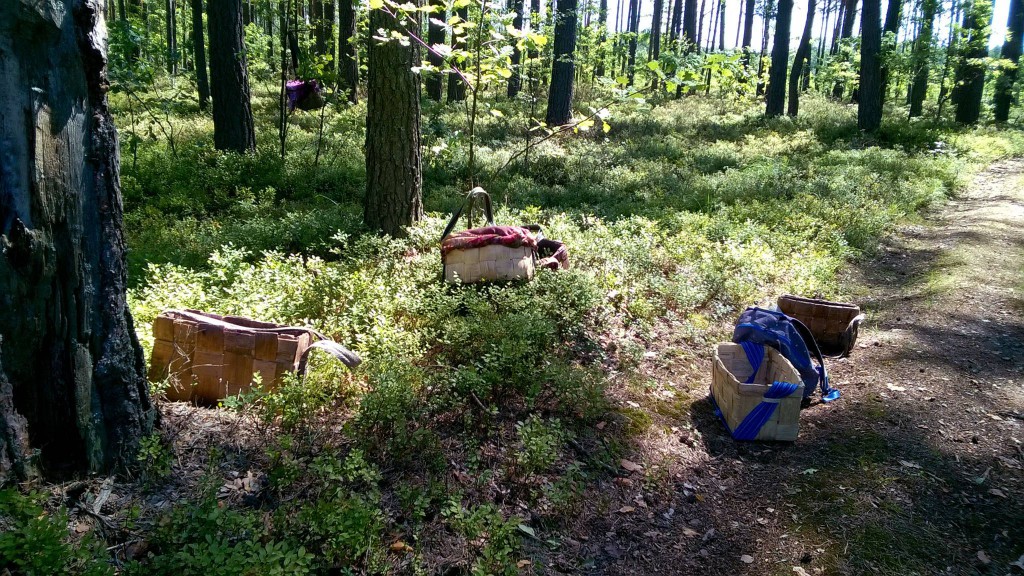 Groups of adolescent berry-pickers in Rivne Province leave boxes in the grass and disappear for a short time to pick berries. After they have collected enough in their small baskets, they come back and pour the whole yield into a big wooden one. The boxes are covered with stained floral headscarves that are no longer used by the elder women. 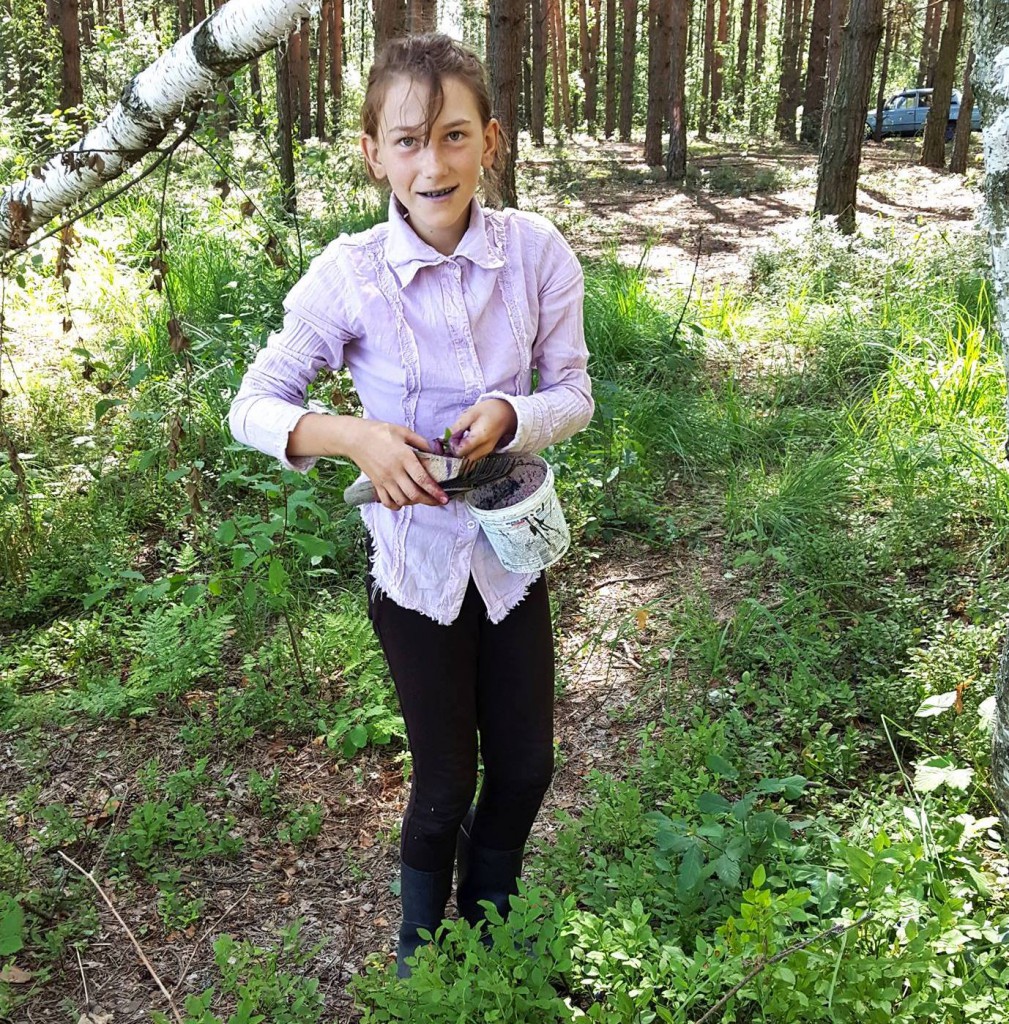 Children are more susceptible to radiation, but this Polesian girl works in the forest as a berry-picker anyway. She carries a small plastic basket tied to her waist. Once she fills it using a scoop, she pours the mildly irradiated berries into a wooden basket. 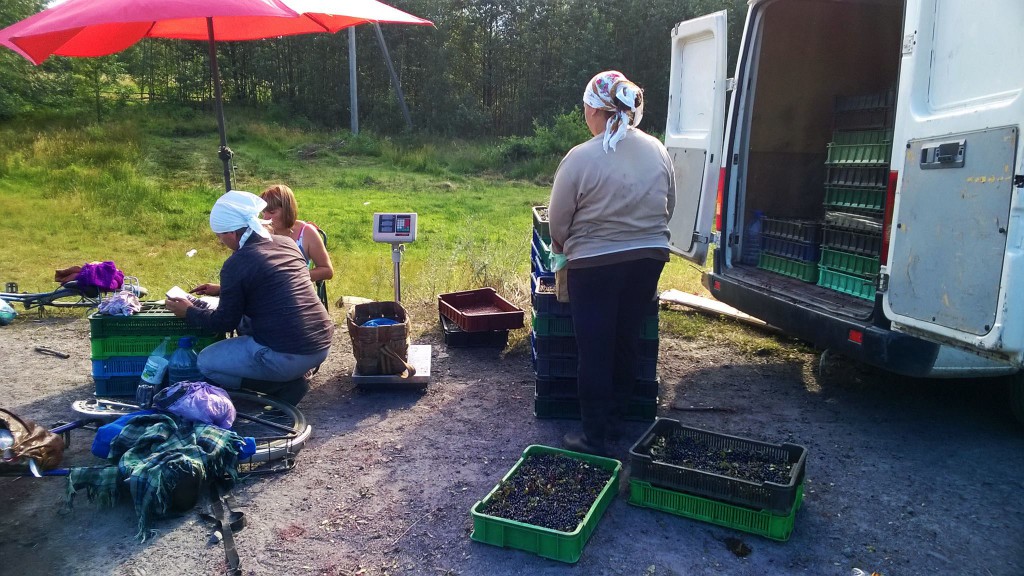 Pickers bring berries to retailers in wooden boxes, carrying them by hand or on bicycles. The retailers first weigh the berries, then pour them from the pickers’ baskets to their plastic boxes, pack them into a van, and pay the pickers. Each wooden box holds about 20 liters of berries. Once the van is packed, the retailers depart to a wholesaler, where the berries are weighed and checked for radioactive contamination. 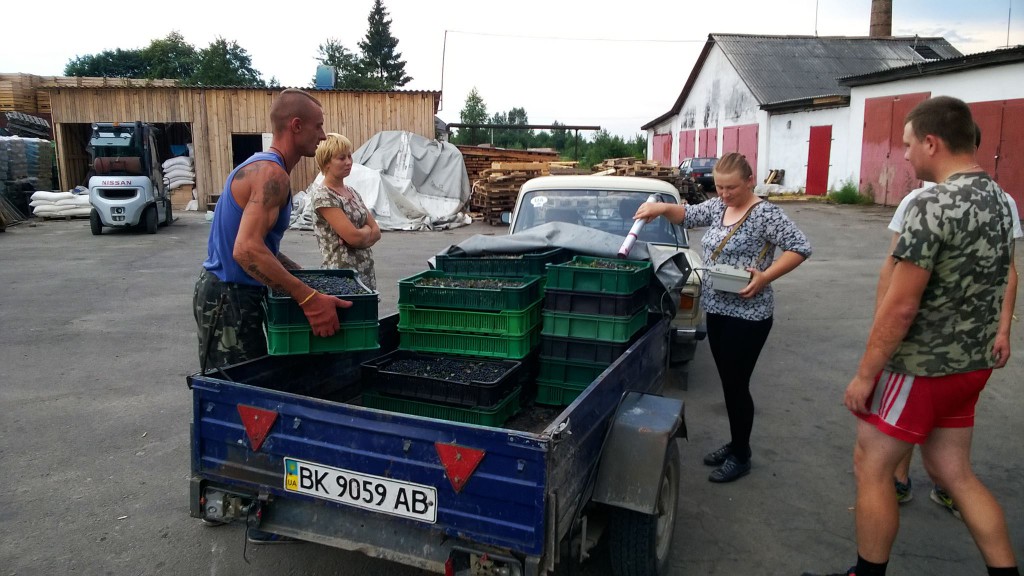 While the men carry the heavy boxes of berries, the women measure radiation levels and negotiate the price. The wholesale representatives make a rough measurement using an old Soviet-era Geiger counter. Boxes that give off a strong signal get flagged for a more detailed examination, where the exact radiation levels are recorded in becquerels per kilogram. The blonde woman to the left anxiously watches the process, worrying that radioactivity clinging to her old trailer might give a false reading to the berries. 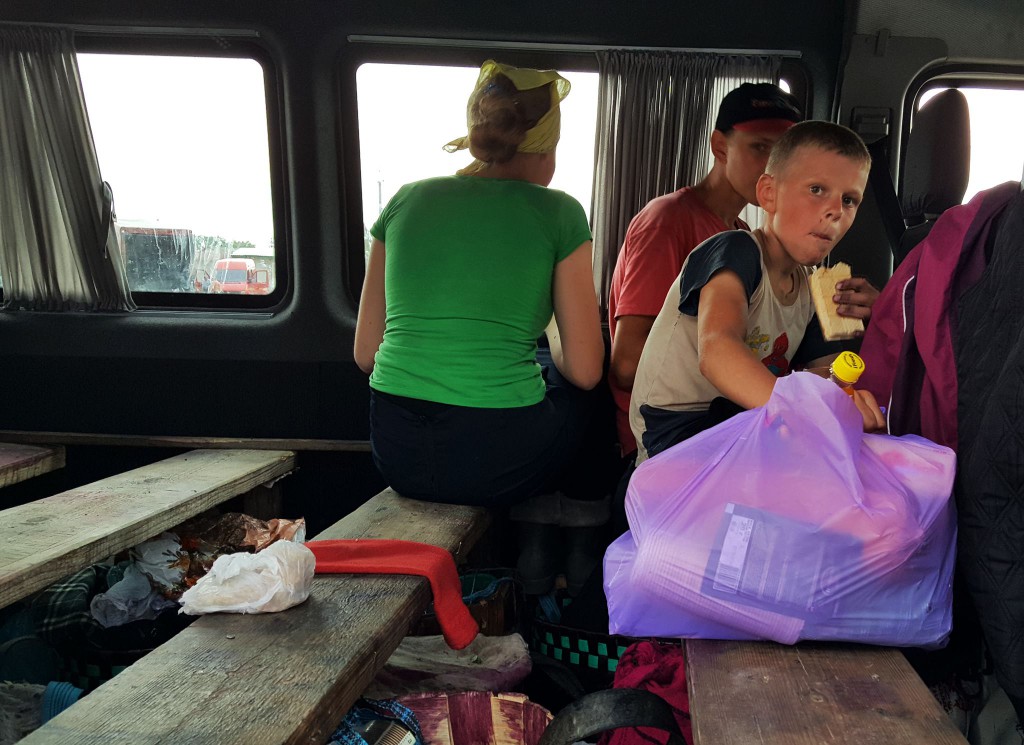 After selling crops to the wholesaler, the retailers and berry-pickers reward themselves with food purchased in the supermarket next door. Soft drinks, ice-cream, chocolate and sausages are among the most popular products. In this way, radioactive produce leaves the Rivne Province and uncontaminated (though not necessarily healthy) processed foods come in from abroad, restoring some nuclear balance. 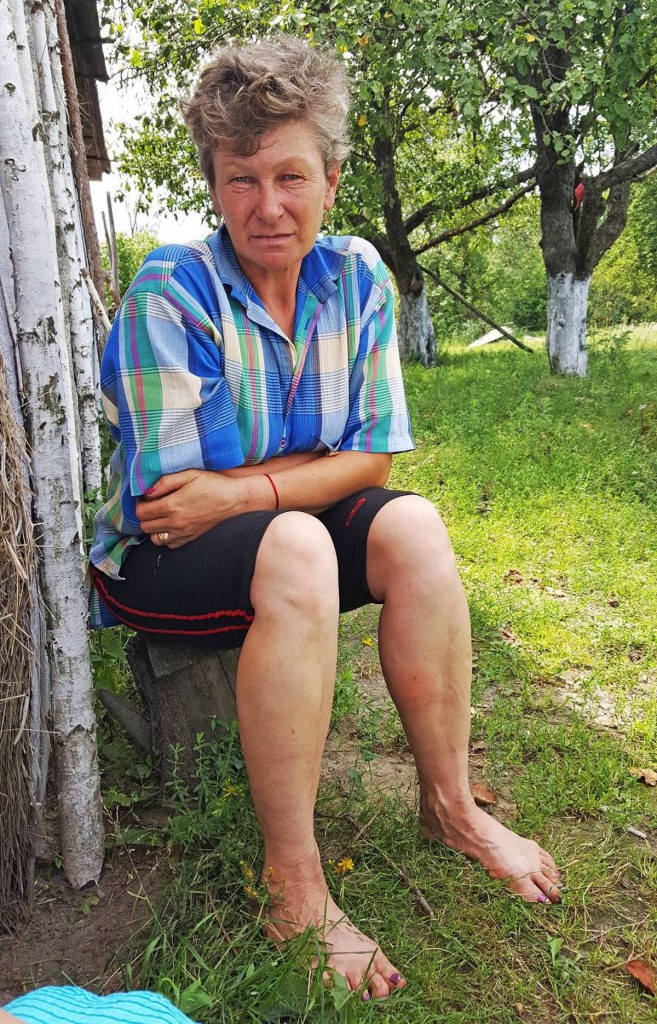 Galina Ches’ko, a veteran berry picker, enjoys a rest on a bench behind her house. A former teacher of physical education, she leads an active life. By lunch she has already gathered enough berries to earn $20 to $25, a significant supplemental income. “Where else could I make that kind of money at my age?” she asks defiantly. “We don’t pay attention to where the radiation is. We eat everything without boundaries.”