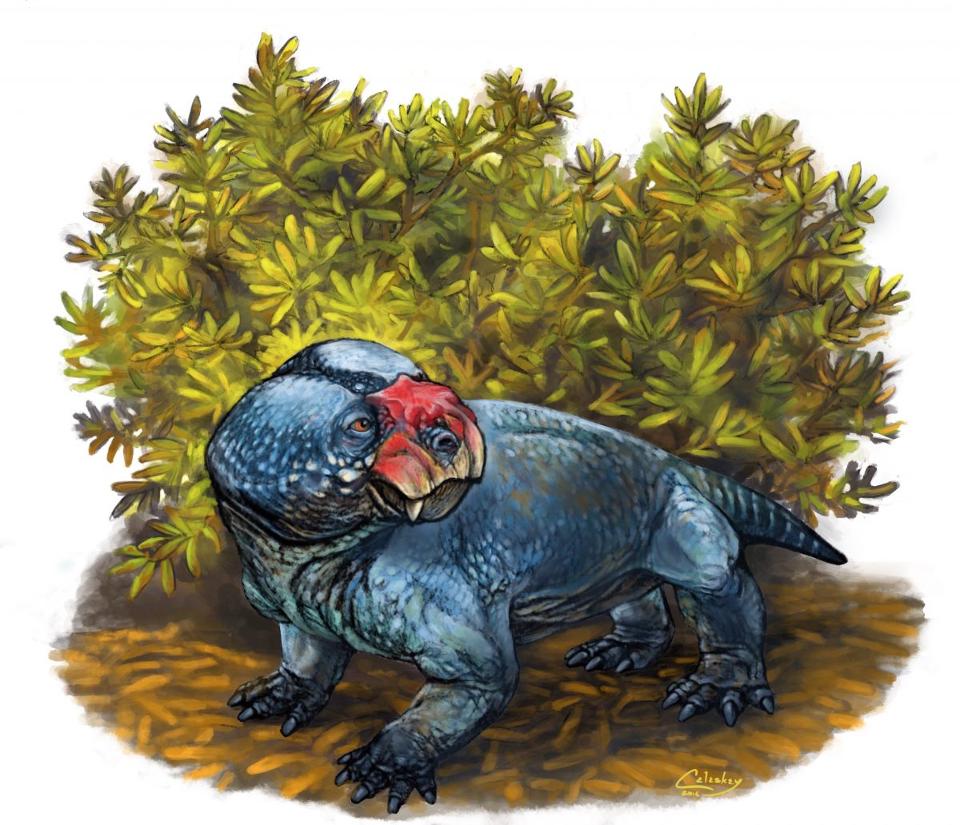 You may have seen the story: Last week scientists decided to name a recently discovered mammalian ancestor after the Pokémon, Bulbasaur. But in this case, fiction is stranger than truth.

Indeed, the new species goes by the name Bulbasaurus phylloxyron, but its association with pocket monsters is coincidental. In taxonomy, it’s common to name a new species after its prominent features, and Bulbasaurus (bulbous lizard ) phylloxyron (leaf cutter) is simply a nod to its unique nasal protuberance and beak. Therefore, the German and South African researchers who unearthed it are, in fact, not weaboos.

Bulbasaurus may not have sported plant vines, but it belongs to a family of squat, homely, water-loving, creatures that shrugged off the Early Triassic hellscape.

Sporting a turtle-like beak and tusks, Bulbasaurus may look somewhat reptilian, but it belongs to a taxon called dicynodonts. Dicynodonts, nested under the order therapsida, which includes mammals, were the most successful herbivores in the Permian era, surviving the extinction event that ushered in the Triassic.

The Bulbasaurus specimen was originally collected in South Africa by the study’s lead author Roger Smith. But researcher Christian Kammerer identified some surprising traits when poring through fossil collections housed at Iziko Museums of South Africa. Among other peculiar features, those tusks stood out the most.

After performing an phylogenetic analysis, Kammerer concluded that Bulbasaurus was an early ancestor of a family of dicynodonts called geikiids, which are known for their flashy, keratinous noses. With this finding, researchers essentially slapped mortar into a puzzling evolutionary gap. But what were those flashy beaks used for?

According to Chicago’s Field Museum associate curator and dicynodont expert Kenneth Angielczyk, there’s “good evidence that they were using these features for display purposes, similar to the way modern antelopes use their horns for display and species recognition. Apparently geikiids thought lumpy faces were sexy.”

Apart from their unique appearance, these hard-nosed leaf-cutters were also tough as nails. According to scientists’ best understanding, the survivors of that extinction event may have stuck in there with dinosaurs until the end of the Cretaceous. They were likely burrowing species who avoided the worst of a punishing environment by holding fort undergound.

“The Early Triassic would have been a baking, post-apocalyptic landscape just covered in vast herds of these squat, piglike creatures,” says lead researcher Christian Kammerer—so metal.

So, while nowadays Bulbasaurus has less of a claim on existence than Fushigidane, at least its final form was a hell of a lot tougher than Pikachu.