New Bragging Rights for Pluto? It May Be the Biggest Dwarf Planet 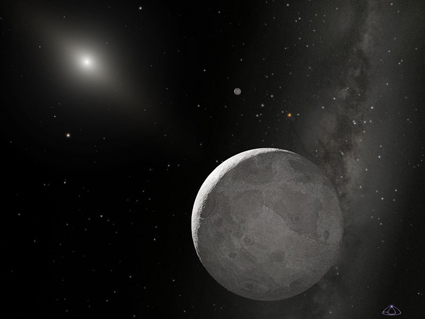 Pluto’s dinky diameter wasn’t the official reason it was demoted from the planetary club back in 2006, but symbolically, size was the last straw. When Caltech astronomer Mike Brown spotted the object we now call Eris back in 2005 and astronomers figured it to be larger than Pluto, the former ninth planet’s fate was sealed. Now Pluto’s reclassification as a “dwarf planet” and the subsequent public outcry is behind us, but new research suggests that the former planet’s symbolic death knell—Eris’ size advantage—was wrong.

The argument has been rekindled by astronomers who just completed detailed viewings of Eris from observatories high in the Chilean Andes. According to Bruno Sicardy of the Paris Observatory, Eris must be no wider than 1,454 miles, while the accepted value for Pluto’s diameter is 1,456.5 miles. And because of the uncertainty of measuring diameter of such a distant object, Kelly Beatty at Sky & Telescope says, Eris’ official size could decease another 30 miles or more after astronomers analyze more of this data.

Images taken in December 2005 by Brown and others with the Hubble Space Telescope indicated a diameter of 1,500 miles (2,400 km), just 5% larger than Pluto’s. But the true size remained uncertain because even Hubble’s supersharp gaze is only barely able to resolve Eris’s disk. (Remember: it’s some 9 billion miles from the Sun, twice as far away as Pluto.) [Sky & Telescope]

This month, however, the window of opportunity opened for astronomers. Eris passed directly in front of a star, which allowed them to more accurately gauge its size.

Gathering the data for the measurements was a grand astronomical feat: Three teams of scientists watched the distant star disappear when Eris crossed in front of it. By analyzing how long the star was covered over, as seen from three vantage points in Chile, the astronomers could calculate how wide Eris’ round disk was. Previous estimates were based on indirect data, such as Eris’ brightness. [MSNBC]

Mike Brown, writing on his website, notes that making this measurement was a stroke of good fortune. Eris is so small and distant that the shadow it cast when passing in front of the star covered an area 25 times smaller than the Earth itself. Fortunately, the band of our planet that the shadow passed over included the part of Chile where observatories reside.

Brown warns that there are uncertainties even with the new measurements, though larger telescopes might try to duplicate the Chile feat and bring those uncertainties down. But if the numbers are correct, it means that there’s a lot more about Eris we don’t understand, foremost being the fact that the research still indicates that it’s 25 percent more massive than Pluto. From Brown’s site:

Though Eris is substantially more massive, they are essentially the same size. Eris must be made almost entirely of rock with a little coating of frost – which we see – on the outside. How could Eris and Pluto look so similar in size and exterior composition yet be totally unalike on the inside? As of today I have absolutely no idea.

Finally, there’s the payback for Pluto—if it’s bigger than Eris, then it’s the largest known object in its region, the Kuiper Belt. Alas, true planetary status will probably never return: Pluto will never “clear its neighborhood,” one of the three International Astronomical Union criteria, so a dwarf planet it shall remain.

Would things have gone differently for Pluto if Eris was initially identified as slightly smaller than it, rather than 5 percent larger? I put the question to Brown (who tweets as “Plutokiller“), and he replied via e-mail:

Funny, huh? My suspicion is that within the final error bars we won’t actually be able to say for sure which one is bigger. But the one thing we do know well and the one that probably matters the most to the solar system is that Eris is significantly more massive, so I suspect we would still have had to deal with Pluto!

For plenty more on what it means to be a planet, pick up the December issue of DISCOVER, which hits newsstands this week, and check out the piece “Why Size Matters” by resident Bad Astronomer Phil Plait.