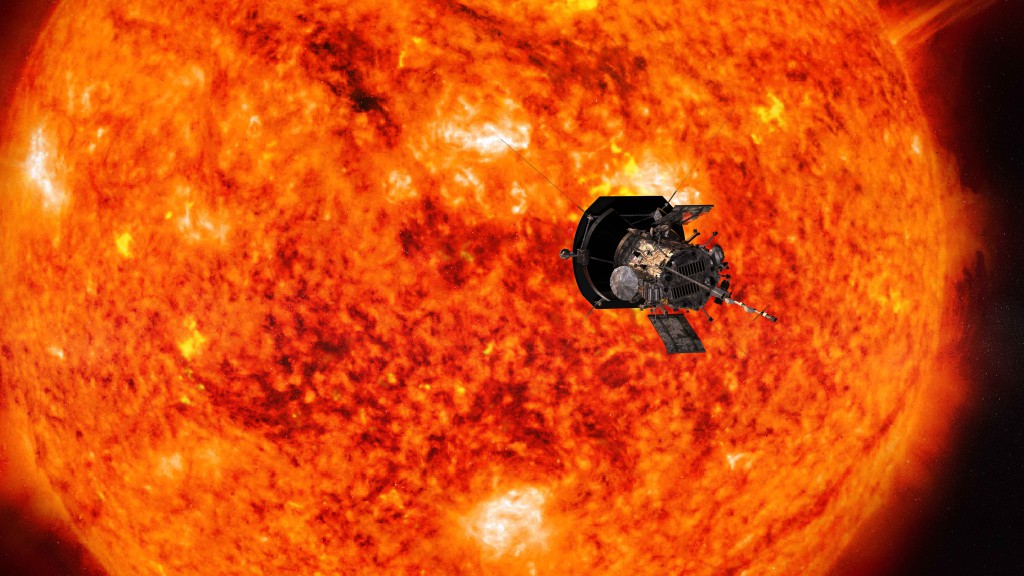 The Parker Solar Probe will help explain the mysteries of our sun’s atmosphere – a mission first envisioned more than half a century ago. (Credit: NASA/Johns Hopkins APL/Steve Gribben)

We often equate light with a lack of mystery. We elucidate or illuminate answers. So it’s tad ironic that the brightest object in our solar system remains one of its most mysterious.

Scientists still don’t understand why the sun’s corona, or atmosphere, is hotter than its surface — or why the solar wind accelerates as it races away.

If you polled solar scientists, they’d probably say we have most of the picture, says David DeVorkin, a space historian at the National Air and Space Museum. However, it needs validation.

But Parker’s full measure rests not only its potential to solve a defining astronomical mystery, but also in its history. The spacecraft will soon become NASA’s oldest successfully-launched mission proposal. It emerged during the very culture wars and power struggles that built and defined NASA. 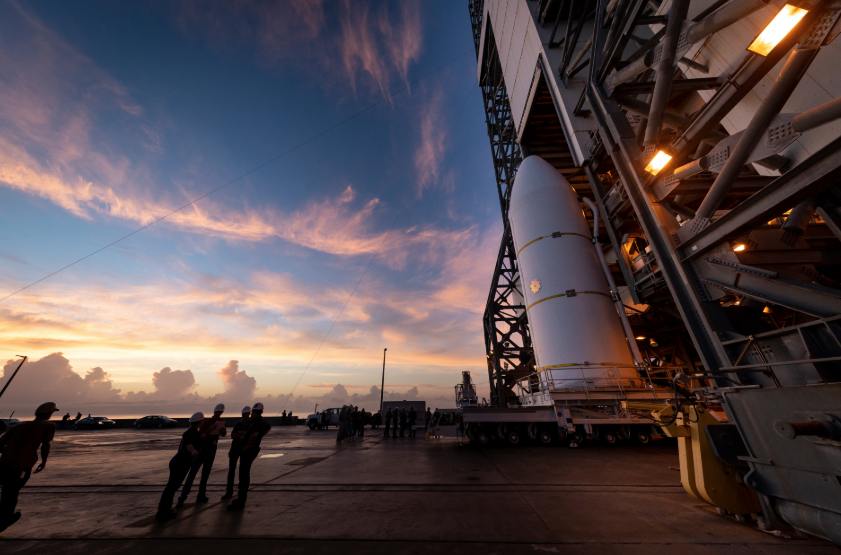 Back of a Bar Tab

There were many space programs before NASA. Most of those efforts emerged after a dinner party where physicist Lloyd Berkner proposed that the International Council of Scientific Unions host an International Geophysical Year (IGY). The IGY would last from July 1957, to December 31, 1958, and would prompt scientists from the world over, Cold War be damned, to collaborate on scientific experiments.

Of course, the U.S. and Russia used IGY space science to show off their ballistic missile “launch vehicles.” However, Eisenhower initially stipulated that the U.S. not use any classified rockets. America designed the Vanguard rocket instead. This set U.S. projects behind. Then the first Vanguard failed, and Russia launched two Sputniks, shocking the world.

Soon after, Eisenhower lifted that stipulation, brought on a scientific advisor, and launched the precursor to DARPA, the Advanced Research Projects Agency (ARPA). ARPA coordinated launches with Vanguard and other rockets, working with the Army, the Naval Research Lab, Air Force Space Technology Lab, Jet Propulsion Lab (JPL), and half a dozen other research organizations.

The experience of one physicist who would be crucial to the Solar Probe concept, John Simpson, exemplifies how harried this space race amalgamation was:

“I had a design, some prototype instrumentation and, in May 1958, visited Washington. D.C.. where I talked with Hugh Odishaw. He pointed out that a meeting was being held the next day. . . [that included] people from ARPA.

That night at the Cosmos Club I immediately prepared a draft proposal in the form of a series of sheets using the back side of the Cosmos Club correspondence paper and brought it with me to the meeting. I showed the Review Committee what I wanted to do in the way of an experiment. . .This led to our being given about 50% of the space of the payload capabilities for Pioneer-2 and I went home that night elated.”

As NASA administrator John Naugle once put it: “In the spring of 1958, a scientist coming to Washington to get an experiment flown found a very confusing situation. Where did one go to find a place to fly one’s instrument — ARPA, the National Academy of Sciences, USAF’s Space Technology Lab, one of the Military services, or the embryonic NASA?” 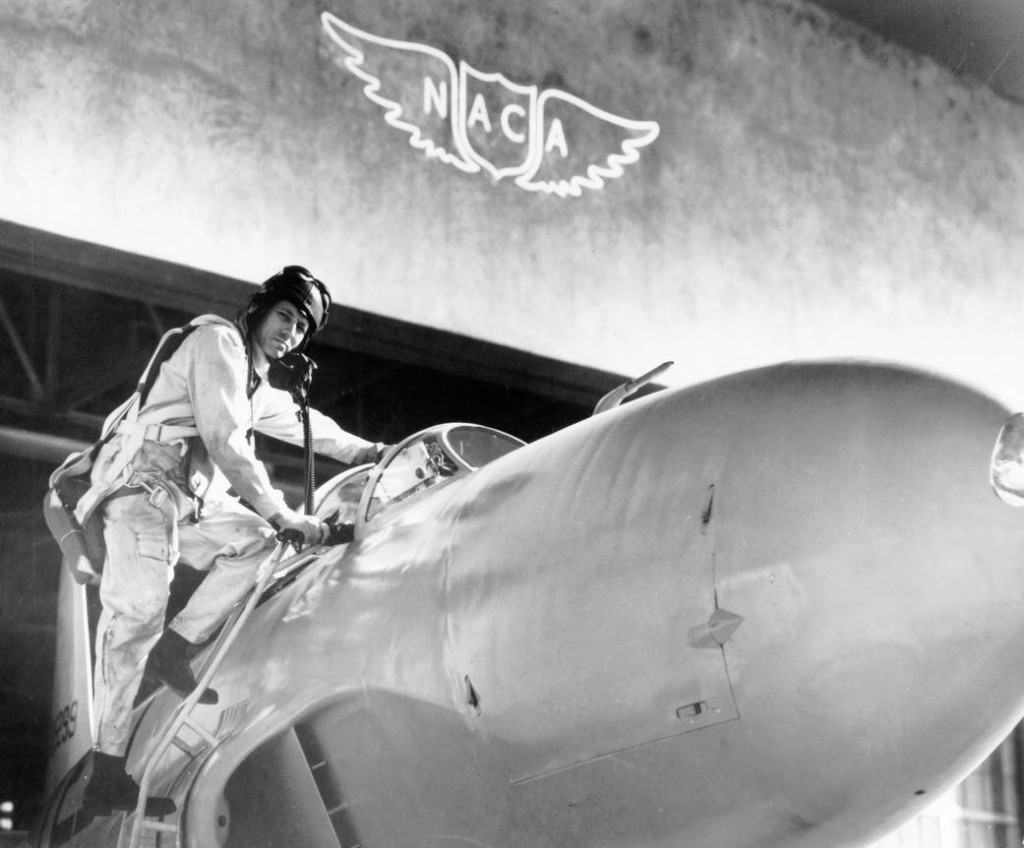 NASA emerged out of NACA, the National Advisory Committee for Aeronautics. The agency would go on to become the definitive government body for all things outer space. (Credit: NASA)

The Struggle to Define NASA

Impatient with their chimera’s failures, Eisenhower and Congress sought to establish a single space agency. Several organizations, namely JPL, the Atomic Energy Commission, and the National Advisory Committee for Aeronautics (NACA) lobbied to become that agency.

At the time, NACA had three labs and 8,000 employees, but space science was only 35 percent of their work. The committee’s director, Hugh Dryden, asked its young scientists if they thought it was worth the gamble to metamorphose NACA into a space agency. With their resounding yes, Dryden drafted a conservative proposal:

NACA would double its staff, create a new space research lab, and accelerate its flight program. It would coordinate projects between the Department of Defense, National Science Foundation (NSF) and academic institutions.

However, after Dryden dismissed the importance of manned space flight and of racing the Soviets, Congress converted NACA into NASA — a singular, managing space agency, headed not by Dryden (who’d stay on as Deputy Administrator), but T. Keith Glennan.

As this was all unfolding, Dryden was also working with Hugh Odishaw of the National Academy of Science. Odishaw was worried that the new NASA might be guided too much by military or administrative priorities, rather than what the scientific community deemed important. So, together, the formed the Space Science Board to advise NASA.

On July 4, Berkner sent a telegram “to hundreds and hundreds of scientists asking ‘What would you do with access to space?’” says DeVorkin. Twelve committees screened the flood of proposals.

One such committee, the Physics of Fields and Particles in Space Committee, was headed by John Simpson. And on October 24, in a report on proposed “Long-Range Plans” for NASA, NASA, Simpson’s committee recommended the first solar probe:

“Among longer range probes, it is of first preference that a probe carrying radiation measuring and magnetometer equipment be directed toward the Sun, penetrating inside the orbit of Mercury, if possible.”

But with Dryden gone, the board had lost its seat on NASA’s shoulder. So, it petitioned Abe Silverstein, who served both on The Board and as NASA’s Space Flight Director, to lend a liaison. Silverstein sent Homer Newell, his head of Space Science.

Through the IGY, Newell had history with Space Science Board brass like Odishaw, James Van Allen and Russell Porter. However, when Newell discovered the board had already screened over 200 mission proposals for NASA, it kicked off a love-hate relationship that would shape the space agency, and see many proposals benched.

NASA was already dealing with a culture clash between conservative NACA engineers and the bright-eyed scientists brought in from the Naval Research Lab and Goddard Space Flight Center, Agency officials also weren’t happy with the science advisory board, which they found presumptuous.

The idea of a solar probe to touch the sun’s corona was lost in the fracas.

The Rebirth of the Solar Probe 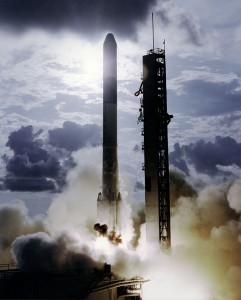 NASA launched one of the spacecraft for the Orbiting Solar Observatory at Cape Canaveral on June 21,1975. (Credit: NASA/via Wikipedia)

Sill, NASA managed to begin launching a series of spacecraft for the Orbiting Solar Observatory in 1962. But even that took convincing.

“NASA thought big. It wanted to launch a few big missions for the orbiting astronomical observatory series — lumping solar and planetary and stellar,” says DeVorkin. “The astronomers and physicists said ‘What?! The type of orbit and the type of craft we need for those. . .observations need different types of equipment. They can’t fly together!’”

By 1978, technological advancements allowed NASA to consider launching a solar probe to within a couple million miles of the sun — closer than even Parker — but that too fell by the wayside.

Then, in 2005, the concept was brought back to life by NASA and JPL. And the task hasn’t gotten any easier with time.

To get there, Parker must run a gauntlet: It’ll fly by Venus seven times over seven years to get the proper momentum to orbit the sun 24 times. Along the way, Parker will become the fastest moving human-made object ever. And with each orbit, it’ll plunge from freezing cold into a one million mile-per-hour, 1,377 degrees Celsius headwind. All the while, its solar panels and four instruments must stay tucked behind the shield during the closest orbits, when we won’t be able to communicate with the probe for 11 days.

Despite the many obstacles Parker has overcome — and those still ahead — six decades after the spacecraft was conceived it’s about to become the first probe to orbit closer to the sun than Mercury. And that seems like a technological marvel even for 2018.