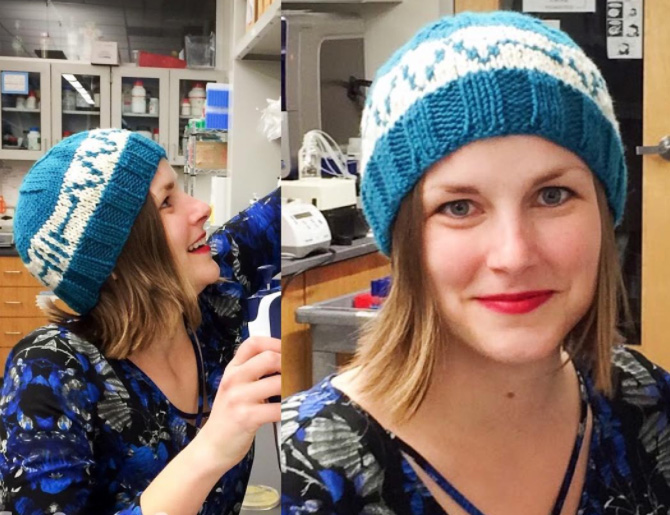 These days, a march on Washington, D.C. isn’t complete without the requisite headwear.

Heidi Arjes, a microbiology postdoctoral fellow at Stanford University and knitting enthusiast, is combining two of her passions to help science advocates make a bold statement during the upcoming March for Science on April 22.

Arjes, who identifies herself as both an optimist and a yarn addict, started “science-knitting” over 14 years ago. Her early designs, which she mostly made for friends and family, consisted of neurons, human organs and simple organisms like bees and mice. Now, she’s using the skills she’s honed over the years to unite members of the science community in order to generate public interest in their respective fields. You can see her work showcased on the website Craftimism.

Often clad in her own teal creations, Arjes has a repertoire of over 20 different designs, including themes highlighting archaeology, coding and computing, agricultural science and even renewable energy. One of her most popular designs is of a simple circuit depicting a battery and three resistors.

It’s been dubbed “the resistor hat.”

“I wanted something that on its own, could be a really good science hat that represented physics and engineering. I also like the double entendre with the resistor, it’s a nice subtle message,” Arjes explained in an interview with Stanford.

Inspired by a post she saw on the “March for Science” Facebook page, Arjes launched #ProjectThinkingCap, a knitting and crafting campaign aimed at not only sparking interest in science, but is also providing over a dozen science-knit designs to the public. Even non-knitters can get involved, as many of the patterns also come in simple, cutout headband kits. Some of Arjes’ creations have been donated, and will be distributed during the upcoming science march in Washington, D.C.

“Recent events have shown scientists that we need to stand up, be more vocal and do more outreach so that people can learn more about science,” said Arjes. “We want to make science accessible, so people aren’t afraid of it and so they realize how valuable it is for everyday life.”