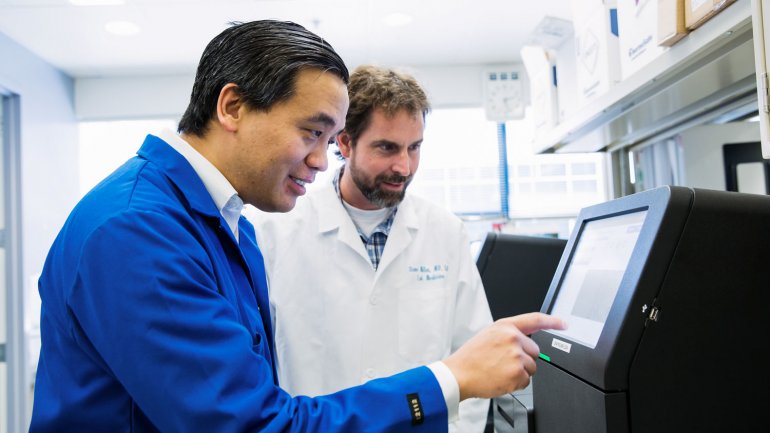 You wake up one morning feeling ready to take on the world. On your way to work, you notice your throat’s a bit scratchy, your forehead a bit warm. By lunch you’ve got a pounding headache and it hurts to breathe. Co-workers agree, you’ve got whatever’s been going around. You end the day early, using the last of your strength to drag yourself to bed.

Identifying the organism causing your misery can confound even trained physicians. When tests fail to reveal what ails you, doctors are often left to make an educated guess, finding a cure through trial and error—a test for this, a test for that. It’s a process that could take days, which is valuable lost time if the infection is severe.

But Charles Chiu is developing a technique to reveal all the pathogens giving you grief—bacteria, fungi, viruses—in a single test. And instead of waiting days, Chiu hopes to deliver results in as little as 3 hours. Chiu calls it Precision Diagnosis of Acute Infectious Diseases (PDAID), and if it proves effective in studies already underway, it’ll help doctors find the roots of illness faster and cut the time patients spend in hospitals.

Take meningitis, a swelling of tissue surrounding the spinal cord and brain, which landed nearly 60,000 people in the hospital in 2014. Viruses, bacteria, fungi and parasites can cause meningitis, or it can even be the result of other underlying diseases or injury. When a patient is admitted with meningitis symptoms, doctors immediately take blood and spinal fluid samples to send out and test for specific pathogens, weeding through the variety of causes.

“Some patients can have hundreds of tests that turn out to be negative,” says Chiu, a professor of laboratory medicine and infectious diseases at the University of California, San Francisco. Chiu says that between 50 and 70 percent of meningitis cases never come back with a positive diagnosis—negative results could mean the target microorganism isn’t present, or that it wasn’t present in large enough quantities to be detected. In those circumstances, physicians make an educated guess and see how the patient responds to treatments.

Testing for a hypothesized diagnosis is like a police detective drawing up a list of assumed suspects and only searching for their fingerprints at the crime scene. Chiu and his colleague Steve Miller, director of the clinical microbial laboratory at UCSF, have a better approach: wrangle up all the known pathogenic organisms that could be suspects. Instead of starting with assumed perpetrators, Chiu’s approach would lift all “fingerprints” from the crime scene and run them through a database to find a match.

Metagenomic analyses like Chius are already deployed in environmental research to reveal unknown organisms in samples from water, dirt and even subways. It relies on the indiscriminate amplification of all DNA present in a sample, followed by matching the amplified fragments to known species’ genomes using advanced computer algorithms. Because virtually all infectious agents leak some unique strands of DNA or RNA into their surroundings, Chiu’s and Miller’s test could quickly identify the responsible pathogen from blood, nasal swabs or any bodily fluid.

Chiu and Miller first field tested the technique after receiving a call from a Wisconsin physician concerning a critically ill 14-year-old boy. He had been admitted with meningitis to the hospital three times in the past four months. Test after test returned back inconclusive, forcing doctors to place the boy in a medically induced coma.

“We received a sample on a Friday,” says Chiu. “We were able to identify the cause of his illness within 48 hours on Sunday.”

They had detected traces of a leptospira bacterium, which the boy probably contracted while visiting Puerto Rico. Leptospira are susceptible to penicillin, and the boy responded well to the antibiotic treatment and went home in less than two weeks.

Buoyed by this success, Chiu and Miller embarked on a small clinical trial in California last year to run their DNA sequencing test alongside traditional diagnosis on 300 patients admitted to hospitals with meningitis or brain inflammation. Unlike the Wisconsin case, an automated system runs the sequence analysis and database matching so hospital lab directors, who aren’t trained in bioinformatics, can interpret the results.

“This is the future,” said Micky Kertesz at the Precision Medicine World Conference, held in Mountain View last month. “A test from a single blood draw [that can predict] a narrow, targeted treatment.” Kertesz is co-founder of Karius, a Silicon Valley company that is already providing such DNA sequencing tests.

Kertesz highlighted the case of a toddler who, shortly after receiving an stem-cell transplant, developed anemia accompanied by persistent fevers. Scans indicated a fungal infection, but doctors couldn’t pinpoint the species of fungus because blood tests kept coming back negative. The doctors relied on a broad spectrum, very toxic, antifungal drug that had limited effect. The location of the infection and age of the patient made an invasive biopsy too risky and continuing the drug regimen would destroy the boy’s kidneys. That’s how the case stood when Karius was contacted.

“We received 1.2 mL of plasma and within a day we were able to report back Candida,” said Kertesz. Based on the results, the toddler was switched to a much less toxic medication used to target this particular kind of infection.

All the DNA sequencing tests developed so far rely on GenBank, a vast genetic data repository maintained by the National Center for Biotechnology Information (NCBI). It’s an expansive database with nearly 400 million genomic sequence records, but it doesn’t contain everything.

Chiu recounted how, for the 14-year-old meningitis patient, they initially misidentified the species of the leptospira involved because that species’ data hadn’t yet been committed to the database. When they re-ran the sample six months later, it was correctly identified.

There are still issues to be worked out with the technology, but precision diagnosis could become a standard procedure in hospitals in the next five to 10 years. Already, technologies in development could reduce sequencing time from days to hours. If such improvements in turnaround times are matched by decreases in costs, the procedure might even find its way into emergency rooms or out in the field to monitor disease outbreaks.

No doubt, pathogens will still make us sick, but they can’t hide for much longer.