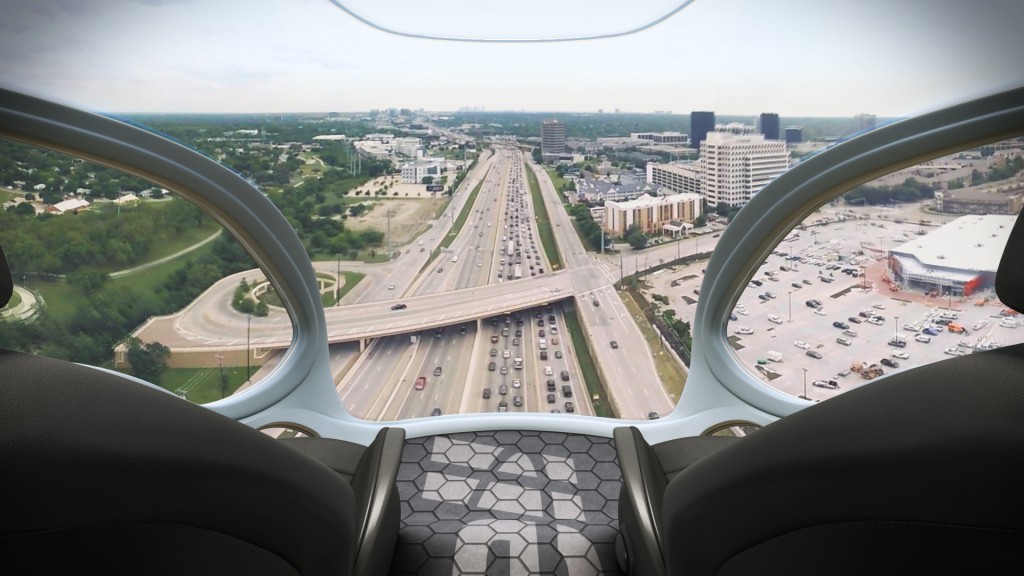 A conceptual illustration of the view from a flying car taxi service. Credit: Bell Helicopter

Uber sees no need for startups to bet on a risky “if you build it, they will come” strategy for flying taxis. Instead, the tech giant believes the demand for a faster aerial commuting option already exists among its 60 million monthly users–especially if the flying taxi service can cost about the same as hailing an UberX car. As a result, Uber has partnered with several companies to help build a “flying car” service that could begin public trials in the city of Dallas-Fort Worth, Texas and Dubai in the United Arab Emirates by 2020.

The announcement for the ambitious 2020 goal kicked off the start of the Uber Elevate Summit being held in Dallas from April 25-27. Besides naming partner cities, Jeff Holden, Chief Product Officer at Uber, introduced the companies partnering with Uber to make those early demonstrations of the “Uber Elevate Network” happen within three years. Such partners include one of the U.S. makers of the military’s tiltrotor V-22 Osprey, the Brazilian aerospace company Embraer that produces both military aircraft and commercial jetliners, and a small Slovenian aircraft manufacturer that is already making and selling electric aircraft.

“Urban Aviation is a natural next step for Uber in this pursuit, which is why we are working to make push a button, get a flight a reality,” Holden said in a statement. “This is Uber Elevate, and we are excited to announce the first group of Elevate partners – a group of visionary industry and government leaders – with whom we will work closely to take that idea off of paper and into reality.”

But first, Uber seems eager to ditch the term “flying car” altogether in favor of more technical terminology. The company’s motivation is understandable given that its flying taxi vision is definitely not about a science fiction vehicle that can go from driving on roads to flying in the air. In any case, having road capability would be redundant and unnecessarily complex from the perspective of developing air taxis that could hop over traffic snarls below.

Uber envisions customers someday getting normal Uber car rides to and from the “vertiports” that would act as landing pads for its flying taxi service. The tech giant believes it can launch the flying taxi service with a starting price comparable to its existing UberX service—currently Uber’s cheapest ride-hailing option for individual customers—by pushing development of electric-powered aircraft with multiple rotors that can take off and land vertically like helicopters. In addition, Uber envisions the production costs of such vehicles dropping as partner companies scale up manufacturing to levels similar to those in the auto industry.

Today’s helicopters are noisy, fairly expensive and rely on mechanically complex systems to support their large and powerful rotors. By comparison, Uber and its partners are looking to distributed electric propulsion (DEP) aircraft that would ditch the large helicopter rotors in favor of having many less complex rotors. It’s not unlike having a super-sized version of the quadcopters or other multirotor drones that people can already buy off the shelf.

The advantages of such electric-powered aircraft would include a much quieter flight capability, a relatively simpler flight control system for pilots to handle, and possibly lower maintenance costs due to being less mechanically complex than helicopters. All those factors matter in making flying taxis both cost-effective from a business perspective and tolerable to city and suburban residents living below their flight paths. Many companies envision such vehicles eventually being autonomous and capable of flying themselves, but Uber hopes that the first generation of such flying taxis would at least have fairly simple flight controls for trained human pilots.

Several of Uber’s newly-announced partners in developing such futuristic technology include notable names in the aviation industry. But the tech giant has also enlisted the help of scrappy smaller companies that have proven their technical chops from an innovation standpoint.

Uber will not be taking a hands-off approach during the development process. The tech giant plans to assist in developing airspace control software and hardware that will manage all those flying taxis it hopes to see in the skies above cities around the world. That is no small task given the daunting challenge of safely handling a surge in flying objects above densely populated urban areas.

But Uber’s new partnerships with reputable aviation companies—as well as preexisting collaborations with federal agencies such as NASA—shows the tech giant is willing to kickstart the international conversation on flying taxis in a big way.