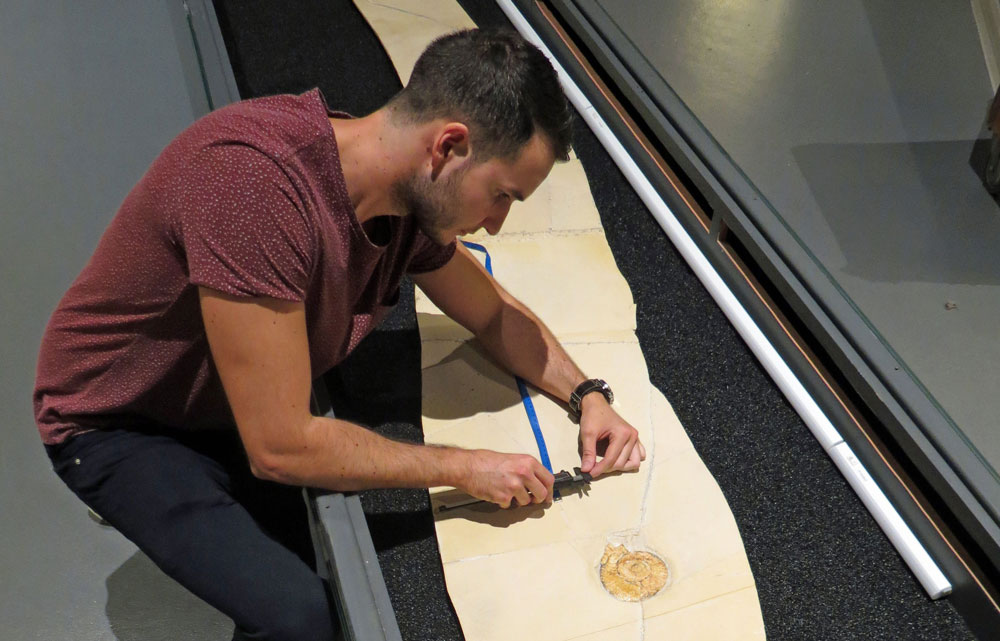 Paleontologists study creatures that have long ceased to be, all in the hopes of “resurrecting” the history of their lives on Earth.

But paleontologist Dean Lomax, an Honorary Visiting Scientist at the University of Manchester, has made a name for himself recreating a very specific part of ancient creatures’ lives: their final struggle before death.

Lomax has a keen eye for so-called mortichnia, which means “death march,” or the tracks left behind by animals as they dragged their near-lifeless bodies through the mud before meeting their end. In 2012, Lomax described what was thought to be the longest example of an ancient death march in a fossil specimen. Discovered in 2002 in the Jurassic limestone of Bavaria, this 32-foot meandering track also contained remains of the horseshoe crab that created it, making it one of the best fossils of a dying animal ever.

A horseshoe crab track and the crab that made it. (Credit: Dean Lomax)

The track indicates the hapless horseshoe crab was flung to the bottom of a lagoon during a storm, landing on its back before righting itself. It then wobbled off into the poisonous, oxygen-poor waters before its, presumably painful, demise. In a sense, the find gives paleontologists an opportunity to hit the replay button, and not only study a specimen, but also its behavior and environment.

“Specimens, such as the horseshoe crab mortichnia, are some of the most improbable fossils ever. They capture the final moments of an animal before it died, moments that are captured in time,” says Lomax. “I know that sounds sick, but it provides paleontologists with so much information about the animal, the trace it left behind, and the environment in which the animal was found.” 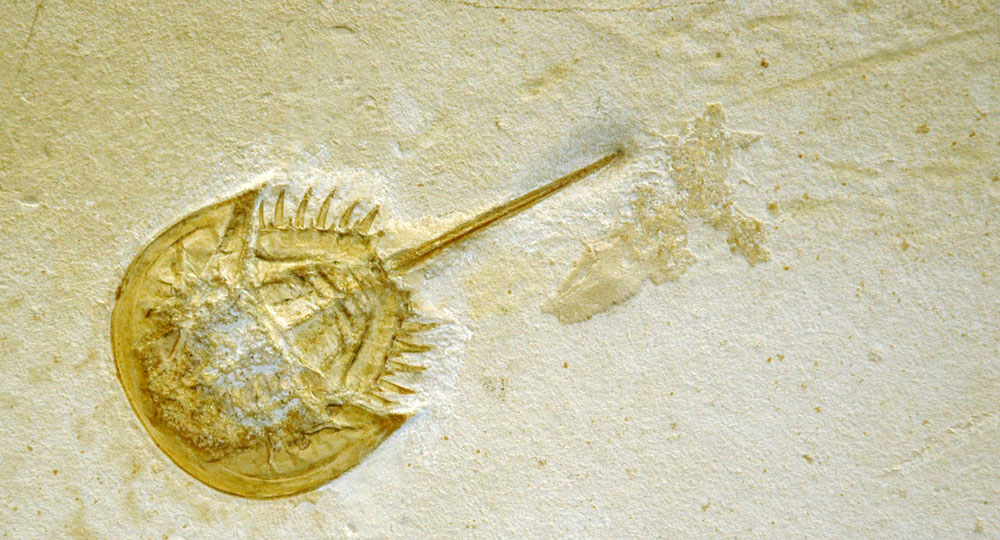 In May, Lomax found another death march, also pulled from Bavarian limestone. The fossil was collected in the 1990s, and this time, it was an ammonite—a marine mollusc—writing its final story. Ammonites have a series of gas chambers, which they use to move up and down in the water, and Lomax says the ammonite sunk to the bottom as gas exited its shell. In this case, the ammonite was already dead by the time it started ploughing a track—a “zombie death march,” if you will. 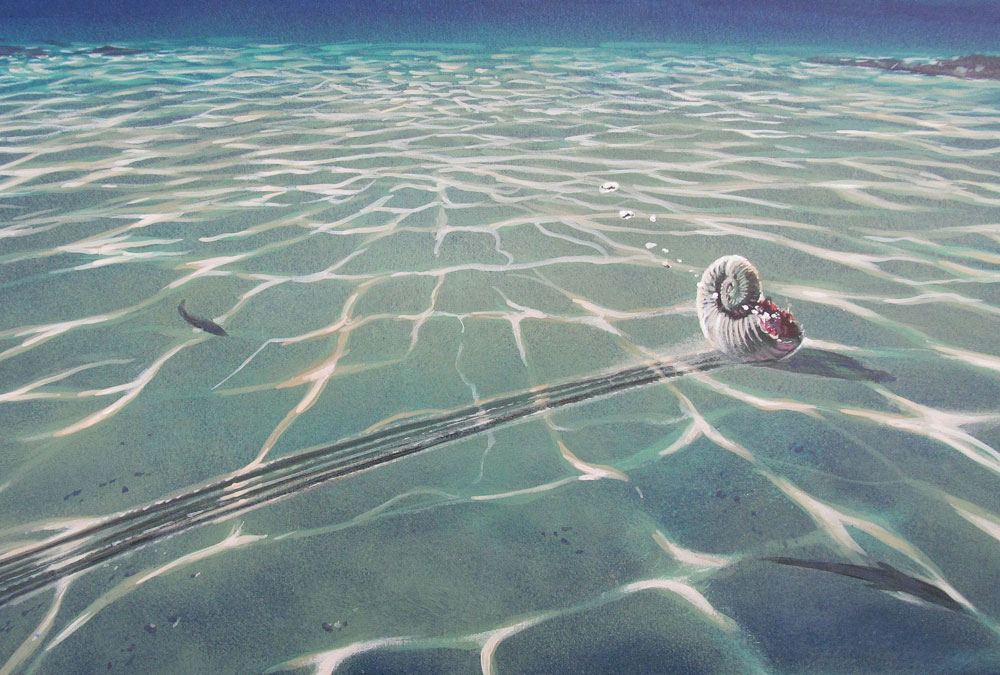 An artist’s depiction of the “zombie ammonite” and the end of its death march. (Credit: James McCay)

A Unique Climb to the Top

Lomax has been captivated by the study of extinct animals since he could pick up a rock hammer, and his rise in the field of paleontology is perhaps just as notable as the fossils he hunts. For Dean, the traditional route into science wasn’t a fit for him. He did not enroll in classes for an undergraduate degree, as is generally required for all professional scientists these days. Instead, Lomax allowed his love for fossils and his keen critical eye for research overcome the necessity of a degree.

“All I ever wanted to be was a paleontologist. I collected fossils, read books, and watched TV programs on the subject,” Lomax says. “Many thought I was strange for collecting long, dead animals, but I found it fascinating.”

Dean’s passion for paleontology has only grown, and today he is an ambassador for the field, with international standing and expertise as a professional researcher and a communicator in his own right. While at the University of Manchester, he completed his Master of Philosophy, a highly-valued achievement in its own right, but a unique accomplishment for someone without a traditional undergraduate degree. 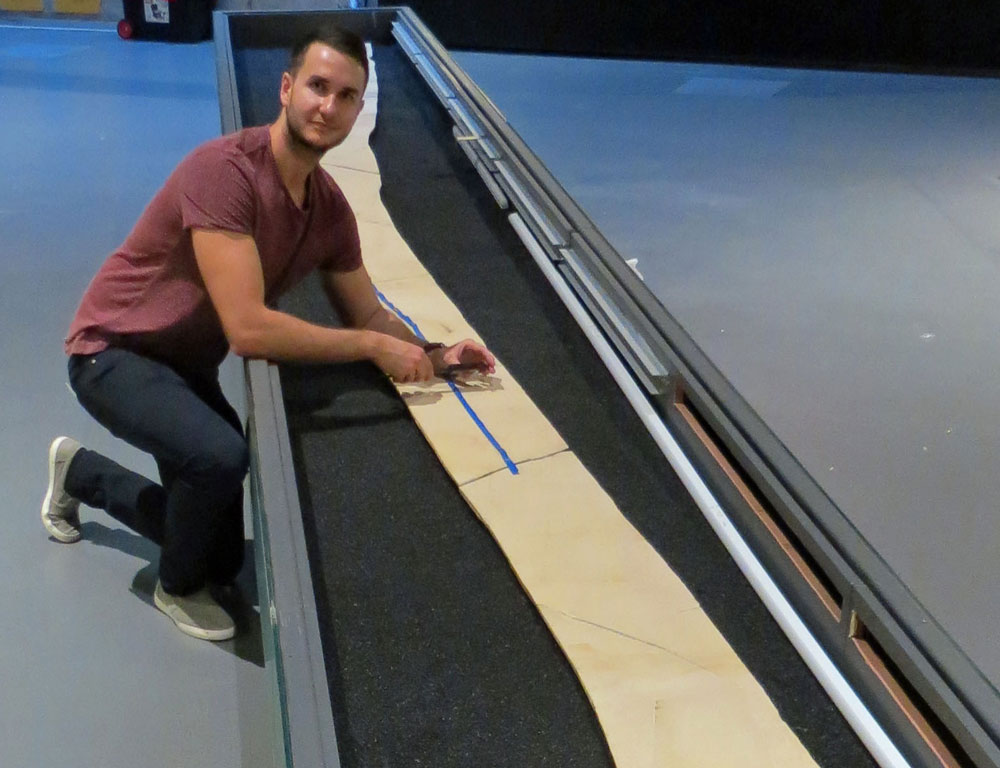 His story, importantly, shows that a non-traditional route into science, and choosing to go above and beyond normal duties, can elevate you in a given field. A degree doesn’t make a scientist, but dedication to unlocking the mysteries of the universe does.

“It’s important to bring long extinct animals back to life – metaphorically speaking, of course — so that through examination and study we can reconstruct what these animals would have looked like and what their environments would have been like,” says Lomax. “With fossils, there is life in death.”