Meerkats Can Thank Bacteria for Their Signature Butt Scents 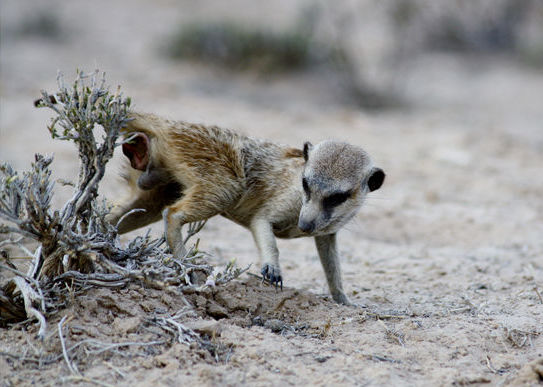 Meerkats can learn a lot from these scent signposts, says Sarah Leclaire of CNRS in France. The scents convey information about an animal’s age, kinship, sex, health, and social status. A meerkat sniffing a marked bush could probably tell which social group the animal who marked it belonged to, Leclaire says.

Now, to learn more about how these bacteria contribute to meerkat scents, the researchers took a close look at both the chemical makeup of the secretions and the bacterial DNA within them. They gathered scent samples from 37 anesthetized meerkats in a reserve in South Africa.

Focusing only on these “mixed” secretions from the pouches, the researchers then found that their chemical makeup was linked to an animal’s sex. Some volatile compounds were more common in male meerkats, and others in females.

Furthermore, they found that each group of meerkats living together had chemically similar smells. “Each individual has a specific scent,” Leclaire says. “However, members of the same group have more similar scent than members of different groups.”

Leclaire says studies like these are becoming more common as technology to sequence DNA advances. And her team’s results fit with other recent studies of the link between microbes and scents. These studies have looked at mice, elephants, and birds called hoopoes. “All suggest that bacteria shape (in part) social scents,” Leclaire says.

In other words, while Timon may have been the sassy sidekick onscreen, real-life meerkats—and other animals—may have their own microscopic sidekicks to thank for their signature smells.