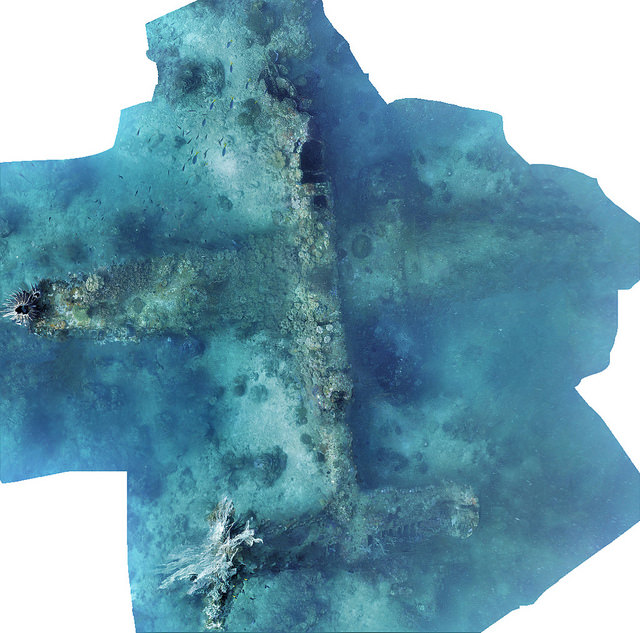 The underwater wreckage of a B-25 Mitchell bomber from World War II near Papua New Guinea. Credit: Project Recover

About 75 years ago, the North American B-25 Mitchell bomber became famous as the twin-engined plane that helped the United States launch the first retaliatory attack on the Imperial Japanese homeland during World War II. The medium bombers mainly deployed in the Pacific theater of war, where they often served as low-flying gunships that attacked both land and sea targets with bombs and machine gun strafing. But not all of the bombers and their six-men crews returned home from those missions, as evidenced by the recently announced discovery of a lost bomber after it had gone missing for the better part of a century.

In February, a team of marine scientists and archaeologists searched nearly 10 square kilometers of ocean floor near Papua New Guinea before finding the debris field from a lost B-25 bomber tied to six crew members who had gone missing in action more than 70 years ago. They also surveyed the known wreckage of a second B-25 bomber that had gone down at sea with one of its crew while the rest of the airmen were taken prisoner by the Imperial Japanese military. Such survey information will be turned over to the U.S. Defense POW/MIA Accounting Agency that is responsible for identifying and recovering the bodies of U.S. military personnel who have been missing in action.

“Our team of divers and scientists conducts site surveys to fully document the wreckage,” said Andrew Pietruszka, a Scripps Oceanography scientist and Project Recover’s underwater archaeologist, in a press release. “That documentation can then be used by the U.S. government to correlate soldiers still missing in action with the aircraft site we discovered, and to evaluate that site for the possible recovery of remains.”

The searchers–organized under the initiative called Project Recover–consisted of scientists from Scripps Institution of Oceanography at the University of California San Diego and the University of Delaware, along with the nonprofit organization BentProp, Limited. They used a combination of historical and archival data to narrow down the area of search for the lost bomber, before surveying the underwater area with divers, scanning sonar, high-definition imagers, aerial drones and underwater robots.

B-25 bombers represented one of the most versatile and heavily-armed U.S. aircraft of World War II. Besides conducting some high-altitude bombing raids, B-25s were modified for a variety of duties such as photograph reconnaissance missions, submarine hunting, and low-flying gunship raids on both enemy airfields and warships.

The bombers were especially active in launching low-level raids on various targets in and around Papua New Guinea starting from early 1942 until the end of the war in August 1945. Some of the deadlier variants of the B-25s could point up to 14 machine guns forward during their strafing runs on rows of Imperial Japanese aircraft parked on airfields, or in attacks on Imperial Japanese Navy warships. The B-25s also sometimes used wing-mounted rockets, parachute bombs and delayed-fuse bombs during these low-level attacks.

But their focus of operations in the Pacific meant that B-25 bomber crews had to deal with many hazards beyond combat. Military aircraft operating in the Pacific faced considerable navigation challenges in flying long missions over vast expanses of ocean and trying to relocate their land bases before they ran out of fuel. Engine trouble and weather problems also claimed many aircraft.

If the planes went down in the ocean, the odds were not great for search and rescue planes or ships to locate the lost bombers and recover the surviving crew. Laura Hillenbrand’s book “Unbroken” cites a report by the Far East Air Force air surgeon about how rescuers found fewer than 30 percent of men whose planes went missing between July 1944 and February 1945. And odds of rescue were even worse before the middle of 1944, which is when the U.S. military stepped up rescue organization efforts.