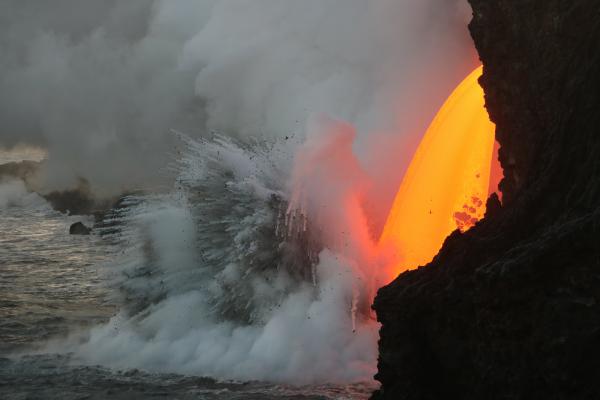 Lava flows into the ocean near Kilauea. (Credit: USGS)

For over a month, Hawaii’s Kilauea volcano has been spewing molten rock into the Pacific Ocean, creating what was until recently a glowing waterfall of lava.

The most active of the main island’s five volcanos, Kilauea has been erupting since 1983. While the outflows usually pose no risk to human settlements, they have occasionally washed over houses and consumed roadways on the island. The most recent event began on New Year’s Day when 21 acres of the Kamokuna lava delta collapsed into the ocean, opening up an underground lava tube and allowing its contents to spill into the ocean.

For the next month, a waterfall of lava plunged into the ocean creating a plume of steam and smoke and flinging bits of lava and rock over the nearby 100-foot cliff. The stream was finally cut off on February 3rd after additional portions of the brittle cliff collapsed, although based on the amount of steam emanating from the area it appears that lava still flows nearby. 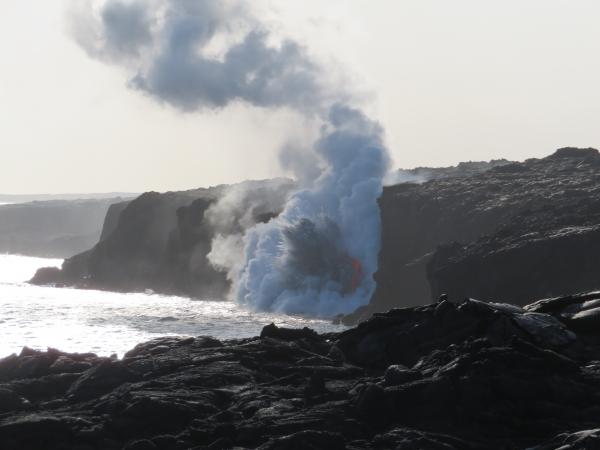 The United States Geological Survey posts updates on the volcano, and notes that the area is still quite dangerous.

Portions of the cliff are cracked and appear ready to slip into the ocean, and poisonous gases and pieces of molten rock may still pose a risk. That hasn’t stopped intrepid tourists from approaching dangerously close to the waterfall in boats, as well as USGS geologists by foot, who were near the cliff when it suddenly cracked and fell into the ocean—no one was injured. The National Park Service has set up a viewing area a safe distance from the flow where onlookers could watch the waterfall. You can also follow along online with a collection of webcams. 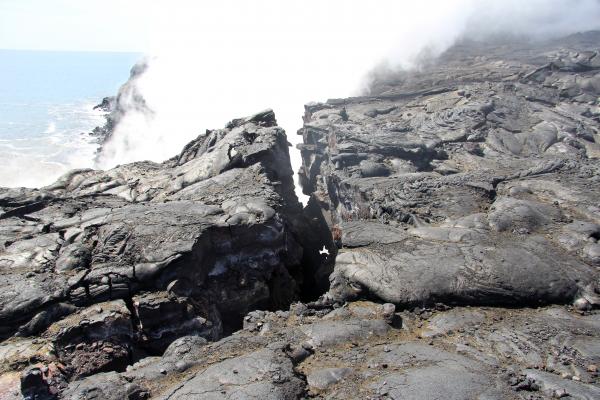 A portion of the fragile cliff with a large crack. (Credit: USGS)

Meanwhile, Kilauea is still erupting, and surface flows are visible up to 1.5 miles away from the main crater, where lava rises and falls along with fluctuations in subterranean conditions. The most recent vent to appear, back in May 2016, steadily built up a floodplain of solidified lava, as well as underground channels, called lava tubes, that allow it to flow unimpeded.

The lava reached the ocean in July, seven miles from Kilauea, and slowly accreted into a fragile edifice of brittle rock. When the unstable foundations could take the strain no more, it collapsed into the ocean, allowing the lava trapped in the tube to rush out.

It was estimated that between one and two cubic meters of lava rushed through the tube per second before hitting the ocean. Upon contact with the water, the lava catalyzes an explosive reaction that creates hydrochloric acid and an ongoing series of small detonations caused by rapidly expanding gases within the stream. Lava flows like this usually only last for a day or two before enough rock builds up to stem the flow. At Kamokuna, the ocean floor must slope down steeply enough that the rock simply falls downhill.

Kilauea has erupted 63 times since 1750, according to the USGS, including a massive event in 1790 that killed dozens of indigenous warriors. Their footprints are still visible in the lava plain. 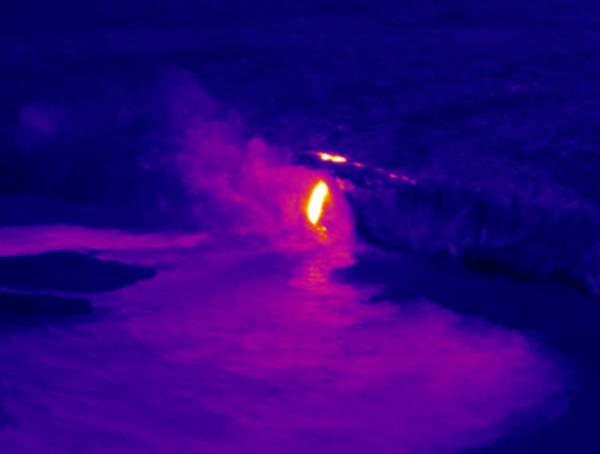 Thermal imagery of the lava flow. The crack is visible just above the waterfall. Geologists estimated it to be 428 degrees just below the surface. (Credit: USGS)

Hawaii’s volcanic history stretches back some 85 million years. The Hawaii is the work of a 3,600 mile-long string of volcanic upwellings that stretches almost to the coast of Russia. They are the result of a massive spear of magma that punches through the Earth’s upper layers and manifests as volcanic eruptions. Over the past 85 million years, the Pacific Plate, on which Hawaii sits, has slowly rotated, changing the location of the volcanic eruptions and dotting the ocean with islands.

In fact, another vent, called the Lōʻihi Seamount, is growing under the ocean off the east coast of Hawaii. Although it’s still more than 3,000 feet beneath the surface, it has shown signs of activity in the past few decades, meaning that it is likely still growing. Don’t start planning your vacation anytime soon though — Lōʻihi isn’t expected to breach the surface for thousands of years.