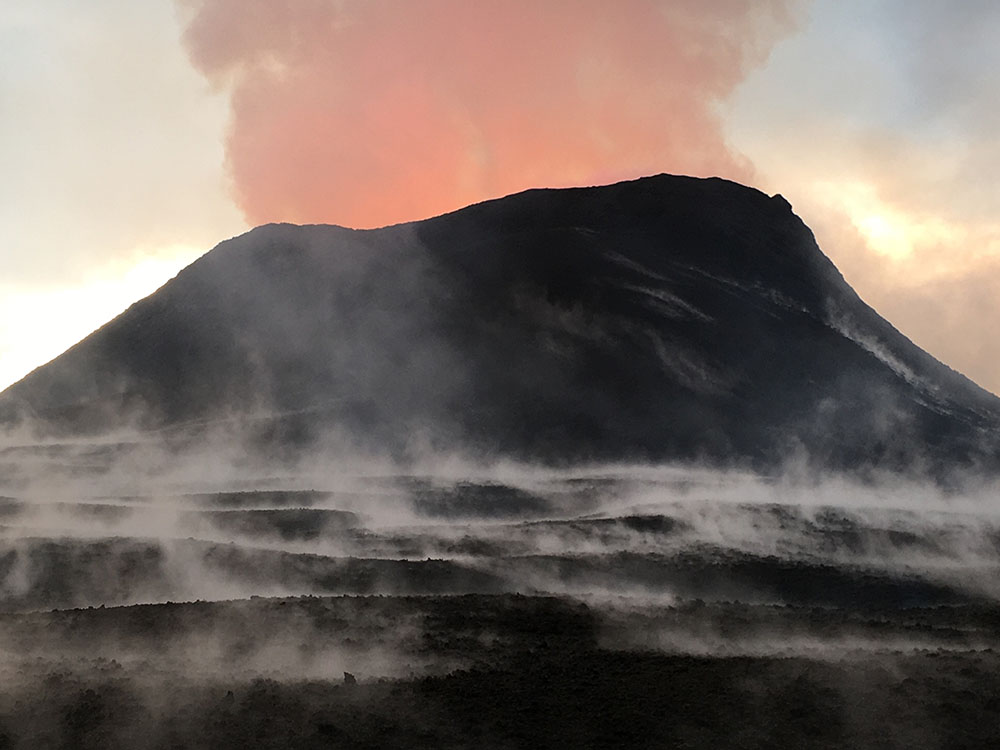 The eruption on KÄ«laueaâ€™s lower East Rift Zone continues onward, with Fissure 8 building an impressive cinder cone similar to the one that was formed during the 1960 eruption that the current lavas have wrapped around (see map below). The cinder cone, built by the fountaining of lava from fissure 8, is now over 50 meters (170 feet) tall with a pulsating lava fountain that reaches 20-50 meters (60-165 feet). All this lava is feeding a very entrenched lava flow that is still reaching the ocean at the former site of Kapoho Bay. Small lava flows or occasional spatter are still spilling from Fissures 6, 16 and 18, but right now it is really Fissure 8 that is driving the eruption. The lava in the channel has been clocked at 24 km/hr (15 mph) close to the vent itself, when the lava is hottest. By the time the flow reaches the ocean, it has slowed down significantly to ~2 km/hr (1.5 mph), mostly thanks to all the cooling that has happened, making the lava stickier and more resistant to flow. The fast moving lava from Fissure 8 might suggest that the eruption is tapping even hotter magma, allowing for such rapid flows to form. 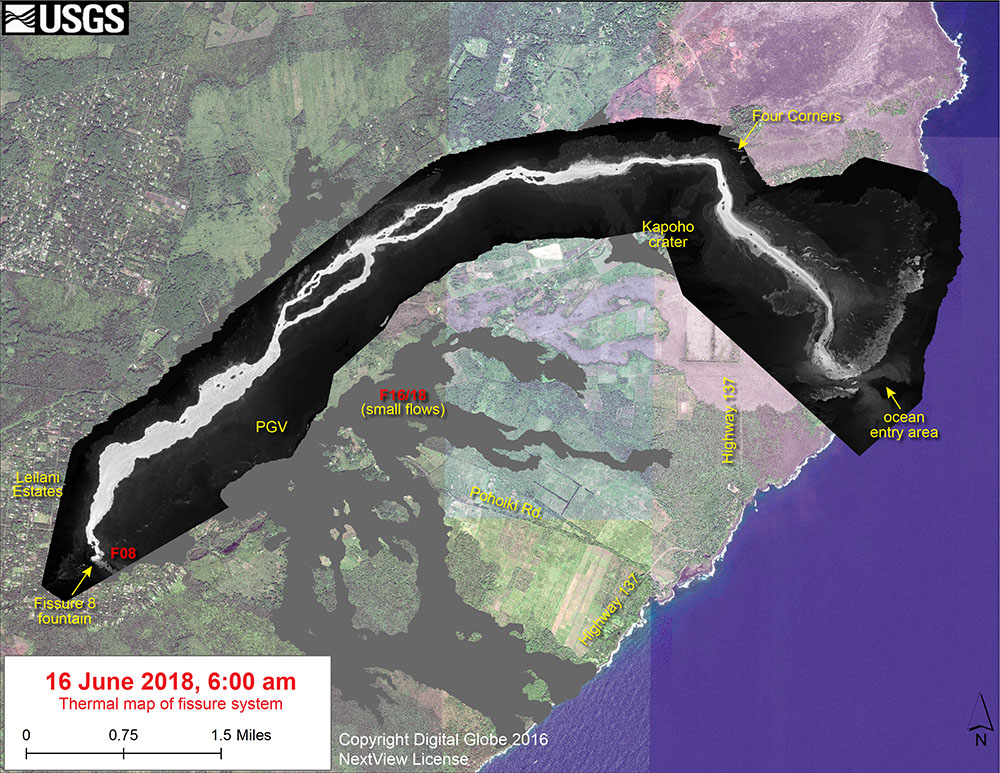 The thermal map (above) of the lava flow field shows the narrow and winding channel of the lava as it heads to the sea. In a few places, you can see small breakouts where the lava has spilled out of the channel. The sharp turn the lava makes before it reaches Kapoho Bay happens as it curves around that 1960 cone. If you look closely at where the lava hits the ocean and you can clearly see the plume of warmer water that reaches almost a kilometer out. This could be caused by the lava entering the ocean or even lava traveling in tubes further into the Pacific before erupting as pillow lavas beneath the waves.

Satellite radar image from @ASI_spazio #CosmoSkyMed system from June 18 added to animated GIF and showing changes at the #caldera of #Kilauea #Volcano, including continued slumping of #Halemaumau crater. pic.twitter.com/RBBDrvrZ2T

The summit of the volcano continues to subside as well (see above and below), to the tune of 60 meters (almost 200 feet) in the last week alone. This has been accompanied by explosions that send ash and debris thousands of meters into the air. These slow, slumping collapses of the shield volcano summits are common, usually caused by exactly what is happening now: draining of magma from the summit reservoir to some other part of the volcano. No one is quite sure how long the pattern of earthquakes, explosions and collapse might last, but the whole summit area of KÄ«lauea will end up coming out of this eruption with an entirely different look. 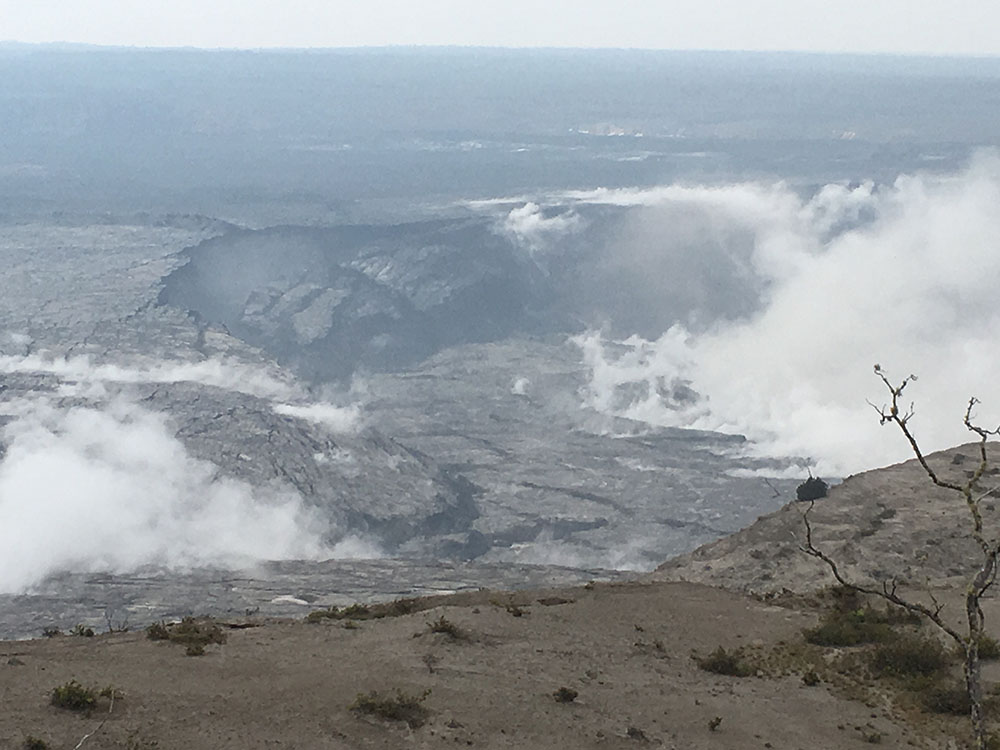 Meanwhile, in the Galapagos Islands off Ecuador, another big shield volcano is erupting (see below). The Galapagos, like Hawaiâ€™i, are a chain of island formed by a hotspot, so the eruptions in the two archipelagos are similar: lava flows and broad volcanoes. Luckily, the lava flows being produced by the eruption that started over this past weekend are not likely to impact people, but rather the rare wildlife endemic to the islands. Much like the current Leilani Estates eruption, this new event at Cerro la Cumbra on Fernandina started with fissure eruptions and lava fountaining and is now producing a number of lava flows that are moving towards the sea. This is the first eruption on the island since last September.