Just How Big is the KÄ«lauea Eruption? 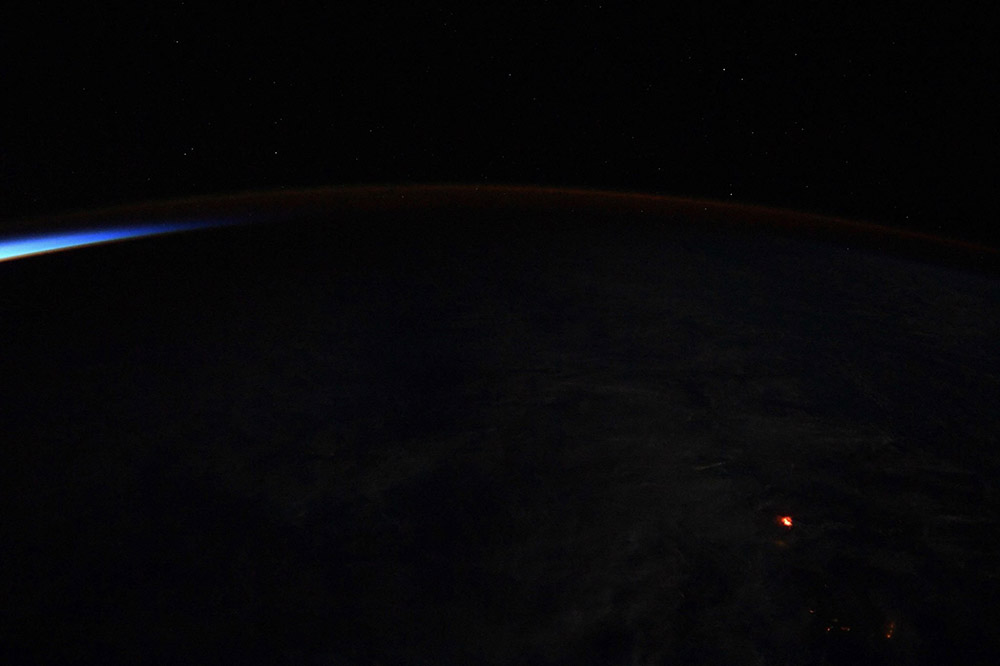 The eruption that started in Leilani Estates on the lower East Rift Zone of KÄ«lauea is rapidly approaching the end of its second month, and right now, there are no signs the eruption will be ending soon. For many of us, this eruption seems unprecedented: how often do volcanoes erupt lava like this for months at a time? It turns out that it isnâ€™t that uncommon, although in terms of the recent history of KÄ«lauea, this is a big event for the Hawaiian shield volcano. 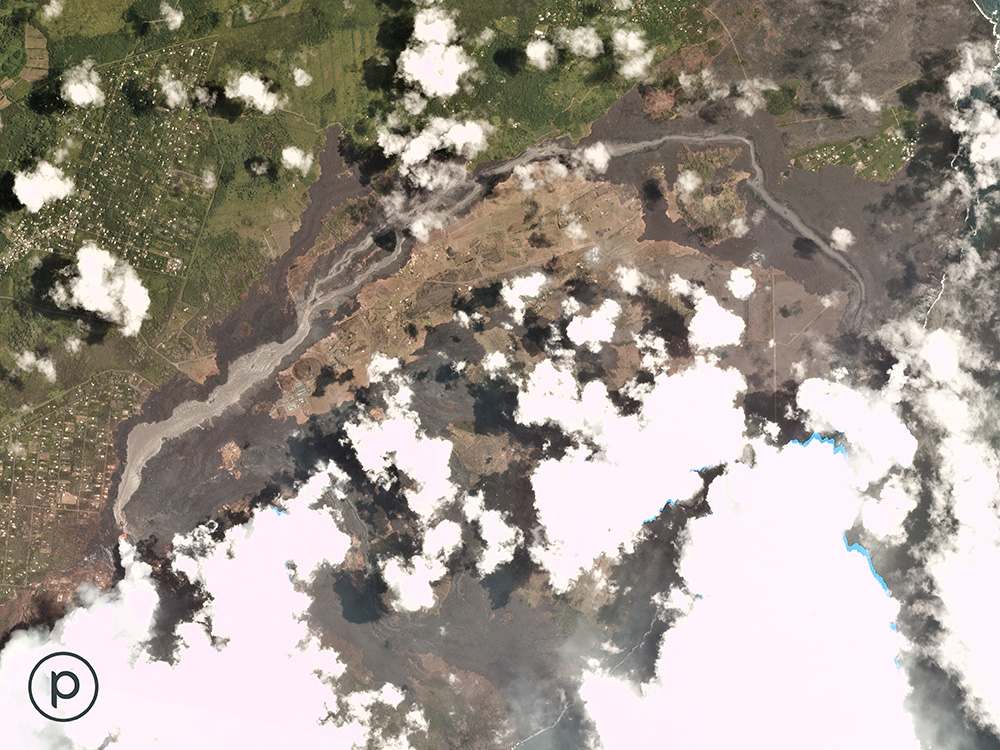 The silvery lava flow from fissure 8 snaking towards the ocean. The glassy nature of the recent flows give the freshest lava that color. Compare it to the thermal image (below). Planet, used by permission.

So, just how big? Iâ€™ve talked a bit about the scale of the eruption before, mostly to emphasize most of the Big Island of Hawaii has not been impacted at all by this eruption. At this point, the Leilani Estates eruption has covered 9.5 km2 with new lava. Of that, over 1.5 km2 is new land added to the island in the former site of Kapoho Bay (see map below). To add some context here, the whole Big Island is ~10,430 km2, so the eruption has coated ~0.09% of the island and added 0.01% to the island. Not exactly a huge amount, but it definitely feels big because of the impact the eruption has had to people living in the Leilani Estates and Vacationland area. 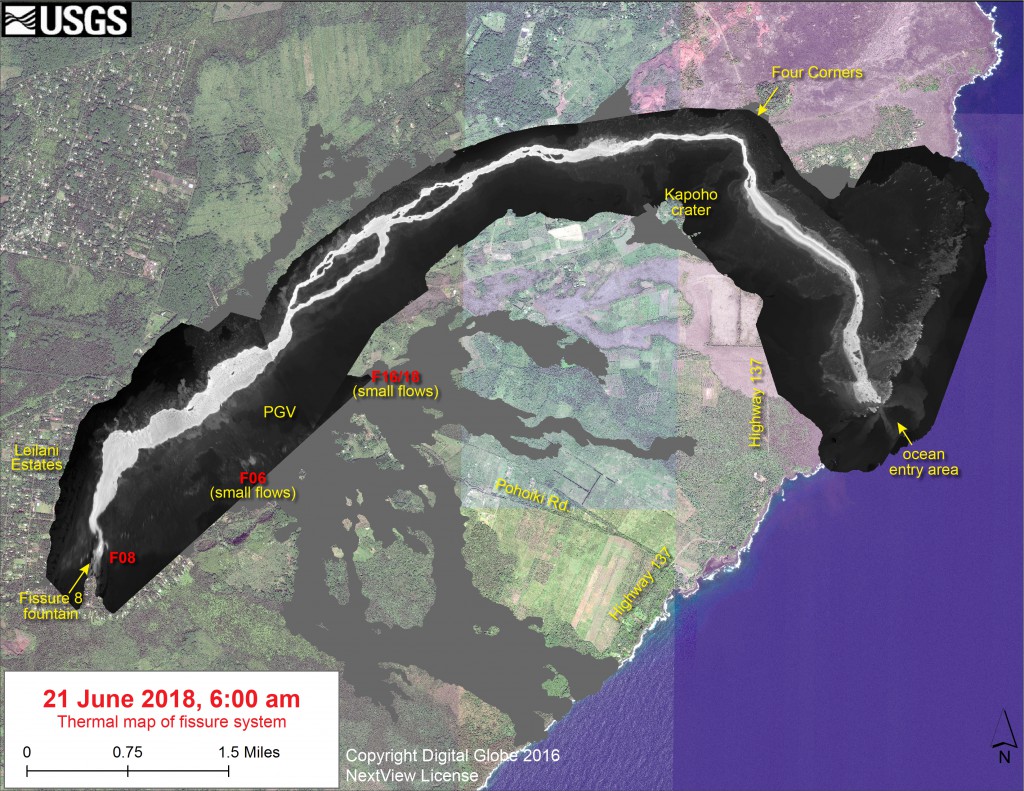 Now, estimate area is relatively easy. Satellite images and aerial shots from helicopters, along with geoscientists on the ground, help map out just how much of the land surface is covered with lava. However, to get a volume, you need to know something about thickness and it can be highly variable. Sometimes that variability comes from the thickness of the lava flow itself â€“ aâ€™a is likely a thicker flow than pahoehoe â€“ but that can be tricky because pahoehoe flows can inflate. The thickness is also a product of the land surface the lava is flowing over, so did it pond in a depression? Or is it merely a frosting? The edges of the flow field are likely thinner as well compared to the middle.

The USGS estimates that the eruption has produced roughly 0.25 km3 of lava. Thatâ€™s a lot! Using the 9.5 km2 area of the lava, that is an average of about 26 meters thick of lava across the whole Leilani Estates lava field! One thing to remember is that most eruptions actually leave more magma unerupted rather than erupted. So, we might have up to 2 km3 of magma that never reaches the surface in this eruption. Instead, it will slowly cool underground. The summit reservoir at KÄ«lauea is estimated to be 2-3 km3, so all the collapse at the summit could be explained by much of that summit reservoir emptying towards Leilani Estates. However, new magma is likely still being fed from KÄ«laueaâ€™s deeper source 100 kilometers below the volcano. 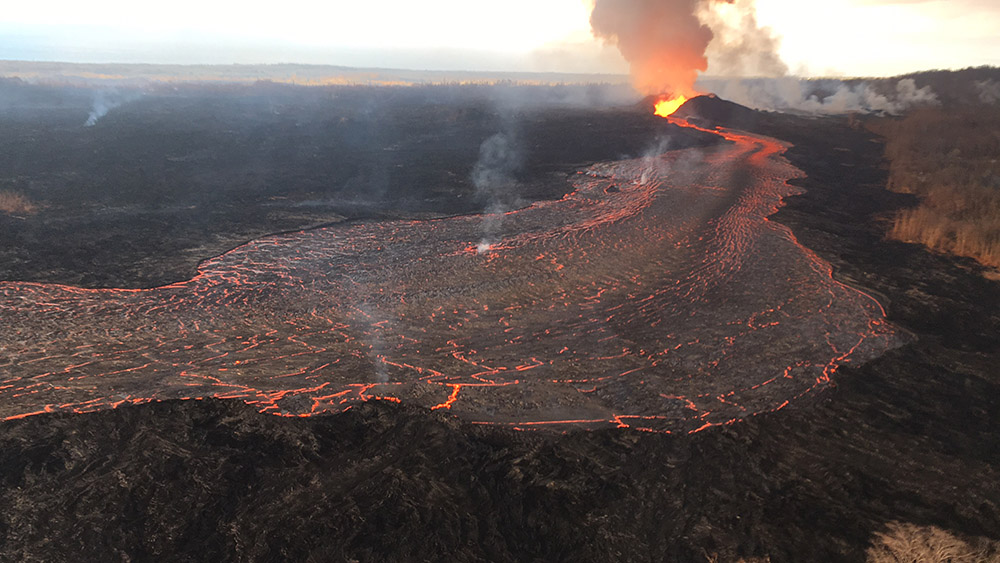 Where does that fit in to KÄ«laueaâ€™s history? Well, the last 35 years of eruption from the summit lava lake and Puâ€™u Oâ€™o generated ~4.4 km3 of new lava, so weâ€™re still well below that. That might be an unfair comparison. In terms of similar events, the Leilani Estates eruption might be the biggest weâ€™ve seen since at least 1790. The 1969 Mauna Ulu eruption that lasted a few years erupted 0.17 km3 while the 1960 East Rift zone eruption that last impacted the area of Leilani Estates and Vacationland was ~0.11 km3. So, weâ€™re above what was considered the largest eruptions from KÄ«lauea since Europeans started watching the volcano.

Where does that fit in terms of basalt lava eruptions at other volcanoes around the world and throughout history? The most recent eruption most similar to KÄ«lauea might be the Holuhraun Lavas in Iceland during 2014-15. This eruption was on the edge of BarÃ°arbunga and not only have a fissure/lava flow/fountain eruption but also a slow collapse within the summit caldera. That eruption went on for over a year and ended up erupting ~1.2 km3 of basaltic lava over 84 km2. Tobalchik on Russiaâ€™s Kamchatka Peninsula erupted for months across 2012-13, adding up to ~0.57 km3 of basaltic lava in the end. So, for both of these recent basaltic eruptions, Leilani Estates is still far below that measure.

Another famous basaltic volcano is Hekla in Iceland. In its 5 eruptions from 1947-2000, it erupted between 0.1-0.7 km3 of basaltic lava. If we jump across the planet, the 1886 eruption of Tarawera in New Zealand produced 1.3 km3 of erupted material. The interesting thing with that basaltic eruption was it was almost entirely explosive, spitting out almost 0.3 km3 per hour! Now, we get to the big ones.

The standard for basaltic eruptions in Iceland is the Laki eruption in 1783-84. During that period, the fissures that opened erupted 15 km3 over the course of almost two years, leaving impacting much of the northern hemisphere due to all the sulfur dioxide emitted. The current KÄ«lauea eruption is only 1/10 of the Laki eruption. Looking at the last 10,000 years, the largest lava flow eruption was also in Iceland: the Great ÃžjÃ³rsÃ¡ Lava that erupted ~8,600 years ago. These eruptions created lava flows that travelled 25 kilometers and dumped 26 km3 of lava on the surface of the island. 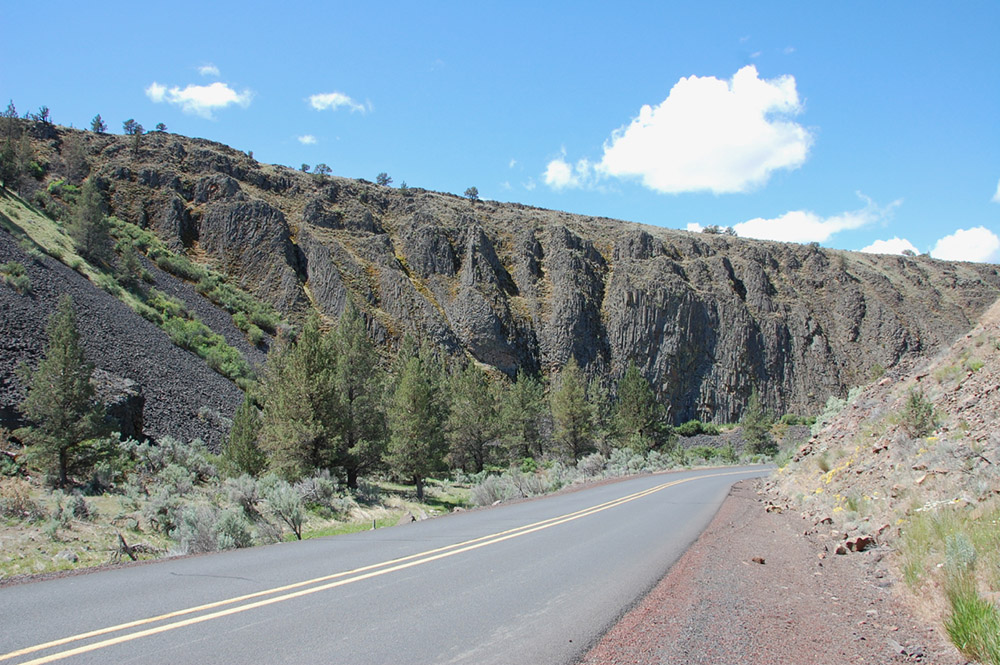 Yet, we can get even bigger! Across the history of Earth, there have been multiple flood basalt eruptions, such as the Siberian Traps, Deccan Traps and the Columbia River Basalts in Oregon, Washington and Idaho. These eruptions last for millions of years put all of these previous eruptions to shame. The Columbia River Basalts (CRB), a smaller flood basalt province, erupted ~175,000 km3 of basalt lavas over a few million years.

Now, that is an unfair comparison to the Leilani Estates eruption, so letâ€™s compare it to parts of the CRB. Most of the CRB were erupted from systems of fissures (much like on KÄ«lauea) that were tens to hundreds of kilometers long and produced lava flows that reached 600 meters thick. Compare that to the Leilani Estates eruption that have fissures hundreds of meters long and flows that are tens of meters thick. The Roza Member of the CRB, which likely all erupted in 5-15 years, dumped 1,300 km3 of lava out by itself. Lava flows from the CRB travelled from Idaho to the Pacific Ocean, a distance of over 600 kilometers!

So, when it comes down to it, the eruption at Leilani Estates has been a fairly typical basaltic lava flow eruption so far. Many flows have been largest, but few have been as damaging to property on the lower East Rift Zone. No one knows how long this eruption will last, but it seems that we are seeing one of KÄ«laueaâ€™s largest eruptions in the last 250 years.